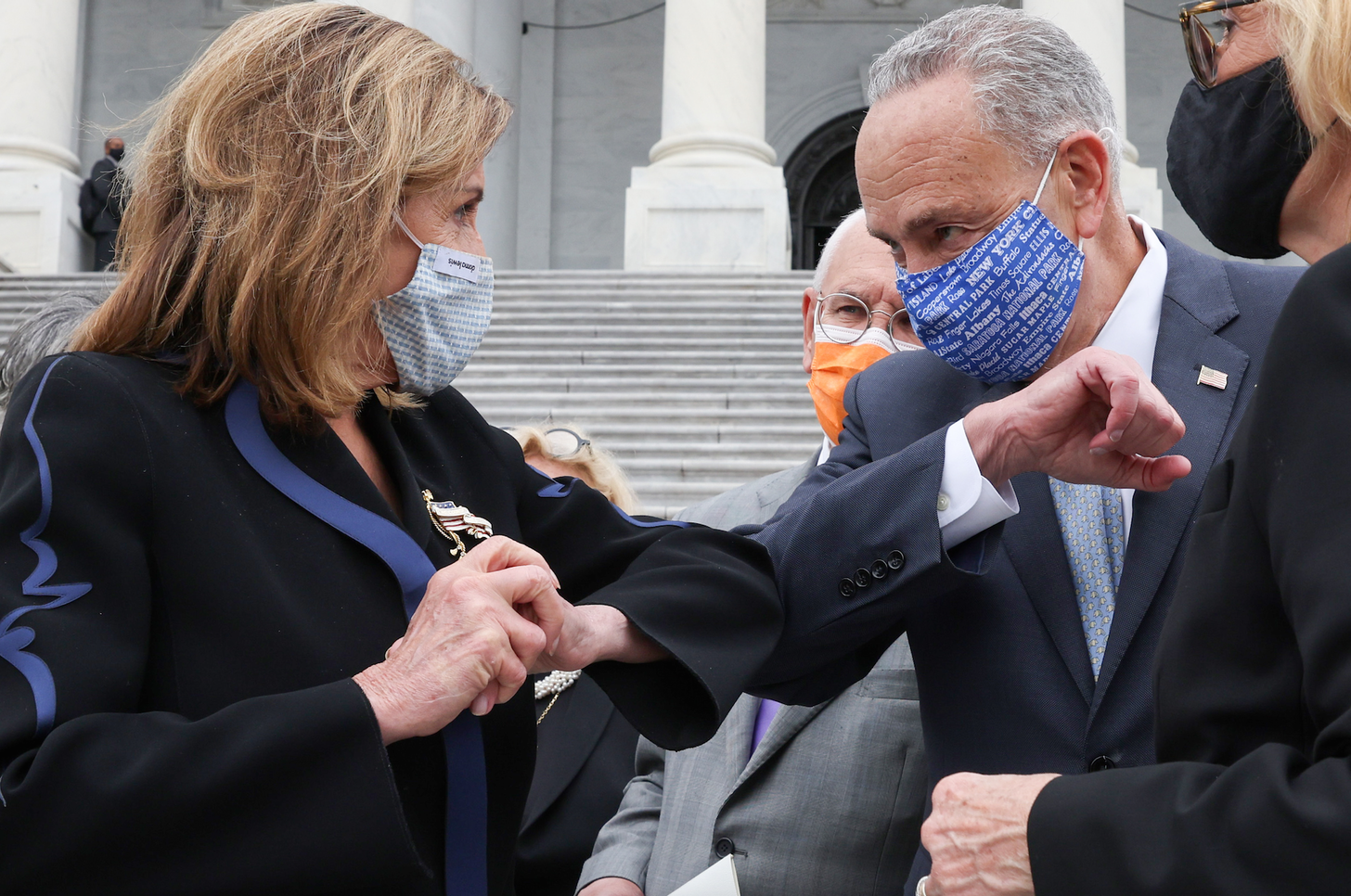 Democrats stonewalled all year on a new pandemic relief package. Now they’re proposing a new plan that undercuts even Republican proposals, and screws everyone but – get this – defense contractors.

“The Democrats,” the aide seethed, “have just done the worst negotiating in modern history.”

At issue: a pair of new Covid-19 relief bills, just submitted by a bipartisan group of Senators. Republican Senator Susan Collins gushed that a“Christmas Miracle” allowed the two parties came together on the twin bills, which the press describes as totaling $748 billion and $160 billion, respectively. “Bipartisanship and compromise is [sic] alive and well in Washington,” clucked West Virginia Democrat Joe Manchin.

It sure is. With the election over, the Democratic leadership in the space of a few weeks somehow negotiated against themselves, working with Republicans to push the total amount of a Covid-19 relief deal further and further downward, to the point where previous plans offered by the likes of Mitch McConnell and Steve Mnuchin now look like LBJ’s Great Society.

Democrats ultimately settled for less than a third of what they had set as a baseline for state and local aid, accepted a package without any $1,200 direct payments, and signed off on a plan that, after offsets, includes less than $350 billion in new money, well below a slew of pre-election proposals rejected by Democrats like Nancy Pelosi and Chuck Schumer as being too low.

“They totally caved,” the aide says.

Back in May, the Democrat-led House passed the HEROES Act, a $3.4 trillion relief package that was pitched as the bill Democrats really wanted. It contained $413 billion new dollars for $1,200 direct payments to citizens, as well as $437 billion in additional unemployment benefits, and a whopping $1.13 trillion for state and local governments.

Trump said the bill was “dead on arrival,” McConnell blasted it as a “$3 trillion left-wing wish list,” and the anti-spending group Taxpayers for Common Sense seethed that Democrats unrealistically put “everything they could think of” in the bill. Still, Democrats insisted this was the right amount, at the right time, a moral necessity.

“The House has passed a major bill dealing with COVID,” Schumer said in May, blasting his Senate Republican colleagues for a “pause” in negotiations. “We have done nothing.”

Republicans, via McConnell, countered in July with the unfortunately named HEALS Act, reported as a roughly $1 trillion aid deal. The bill included another round of $1,200 relief checks. Pelosi in August ripped the plan as “meager measures,” and said Republicans were refusing to take action to feed hungry children:

Republicans refused to take action to feed hungry children nationwide during this pandemic – but they did make sure to give business a massive tax break for corporate lunches. #TheReidOut pic.twitter.com/sHLmkP16u8

When Republicans ended up backing a so-called “Skinny” $650 billion deal, it was reported as a signal that the GOP opposition was determined not to budge above what the Trump administration was willing to offer, at the time rumored to be somewhere between $1-$1.5 trillion.

In September, as time wound down toward Election Day, the bipartisan “Problem Solvers” group released a $1.5 trillion aid plan which they pitched as a version of that theoretical compromise between Democratic and Republican positions. Though the group contained some Democrats, it was dismissed by Party leadership.

A group of Democratic Committee chairs, including Maxine Waters, Carolyn Maloney, and Frank Pallone, released an “unusual” statement denouncing the “Problem Solvers” plan, saying it “falls short of what is needed to save lives and boost the economy.”

Democrats countered soon after by passing an updated version of the HEROES Act that offered $2.2 trillion in relief. The Republicans, this time led by Steve Mnuchin and an increasingly desperate-seeming Donald Trump, came back on October 9th with a $1.8 trillion proposal. Reeling as he stumbled toward Election Day thanks to a series of missteps and scandals, Trump seemed anxious to go beyond his previous numbers, if it meant he’d get to sign more checks before Election Day:

This time, even some prominent Democrats were insisting the time was right to strike. “We’re in a place where we should be able to do a deal,” said California’s Ro Khanna. “We have a moral obligation to do something.”

The Democratic leadership disagreed. It was reported that Pelosi was now insisting on at least $436 billion in state and local aid, and the Mnuchin plan of $300 billion for states and localities just wouldn’t cut it. In a “Dear Colleagues” letter on October 10th, Pelosi described Trump as more interested in taking credit than passing an aid plan:

When the President talks about wanting a bigger reliefiii package, his proposal appears to mean that he wants more money at his discretion to grant or withhold, rather than agreeing on language prescribing how we honor our workers, crush the virus and put money in the pockets of workers.

Ultimately, of course, no deal got done before the election. After the election, the Democrats put two of their most conservative members — Manchin and Virginia’s Mark Warner — in charge of negotiating the Covid-19 relief bill.

Manchin is the guy who just responded to reports that Trump wanted to give out “more money” in direct payments by saying he thought it was a “bad idea” to give out stimulus checks and not supplemental unemployment relief.

Manchin and Warner repped the Democrats in the bipartisan group that included Republicans Collins from Maine, Lisa Murkowski from Alaska, and Bill Cassidy from Louisiana. Their new deal unveiled today makes little sense, in the context of all of those prior negotiations.

Remember all of that state and local funding that Democrats insisted was so crucial to the aid package?

Today, the state and local aid package signed off on by Manchin and Warner is down to $160 billion, appropriated as part of a separate bill that may or may not pass at all, with the main $748 billion plan. In other words, Democrats just agreed to take seven times less than the $1.13 trillion they asked for in the HEROES Act, and about half of Mnuchin’s $300 billion offer in October that Pelosi rejected as “sadly inadequate.”

As for that $748 billion bill? According to the senior Democratic aide, who pointed to comments made by Mitt Romney, it includes $560 billion in offsets, “repurposed from March’s CARES Act.”

In other words, the aide says, “The $748 billion deal is really just $188 billion in new money.” Given all the high-flown rhetoric the Party devoted before Election Day to rejecting aid packages they deemed heartlessly small, the hypocrisy, he says, is “amazing.”

If you include the $160 billion package for state and local aid, the new deal offers a maximum of $348 billion in new money, well below some of the better offers they received from Republicans over the summer and fall, and on par instead with the very worst GOP proposals, like that “Skinny” bill passed in September, which netted out to $300 billion after offsets.

Conspicuously absent? As CNBC put it, the deal “lacks one key area of aid,” the $1,200 direct payment checks that seemingly everyone on the Hill claimed to want, from Trump to McConnell to Pelosi. Those are gone from the “Christmas Miracle,” but fear not, because the bill didn’t screw over everyone heading into the holidays. You can find this little nugget on the last line of the summary of the Bipartisan Covid-19 Relief Act of 2020:

“There are no direct payments for regular working people, people living off tips,” the aide says. “But they made sure there’s a provision in there to help defense contractors who aren’t working right now. They get what they’re looking for.”

With the Orange One on his way out of the White House, denying the president a political win is no longer even theoretically important. Because of this, there’s a school of thought that this deal is revealing something important about how Democrats want to lead under Biden, i.e. willing and/or anxious to work with Republicans on programs signaling fiscal restraint, and away from aggressive social programming ideas of the type favored by the Party’s progressive voters. Maybe that’s not the case, and this is an aberration. But it sure seems like the Democratic leadership went out of its way to take less, once it was finally safe to demand more.

Update, 12/15: The two-bill structure is designed, among other things, to make it possible for members of both parties to vote for the $748 billion relief bill, while potentially shelving the $160 billion bill that includes certain sticking points for both sides. The $160 billion bill includes the corporate liability shield that Republicans want, but Democrats have refused to endorse. It also, obviously, includes the state and local aid that Democrats want but Republicans have refused to endorse.

The bipartisan “compromise” was devised to allow relatively rapid passage of the $748 billion bill, which after offsets again is really $188 billion in new money. The second-ranking Democrats in both the House and the Senate, Steny Hoyer and Dick Durbin, respectively, have both already signaled a willingness to vote for the first bill and not the second. As the Washington Post noted, Hoyer Sunday suggested, “that Democrats may be willing to support a deal leaving out the state and local aid component.” Durbin was quoted saying, “We must provide some emergency relief for the American people before we go home for the holidays. I support the $748 billion bipartisan package.”

The idea being batted around is that direct payment checks could theoretically be re-inserted in the deal, if both sides agree to kill the second $160 billion bill. Or, the checks could be left out, and the second bill could be killed anyway. As the Post put it:

This second bill could end up falling out of the final deal if lawmakers don’t rally around it amid broad opposition among Democrats to approving the liability shield.

It is of course true that McConnell has essentially vetoed multiple Democratic proposals, so it’s not accurate to say a failure to pass a new Covid stimulus bill is the fault of Democrats. The issue is that these post-election bipartisan negotiations are much more reflective of how the leaders of both parties perceive the crisis than anything said or done between the passage of the CARES Act, and Election Day. A few months ago, Pelosi was saying $300 billion for states and localities was an unacceptable insult; now they will take half that, and may end up taking nothing.