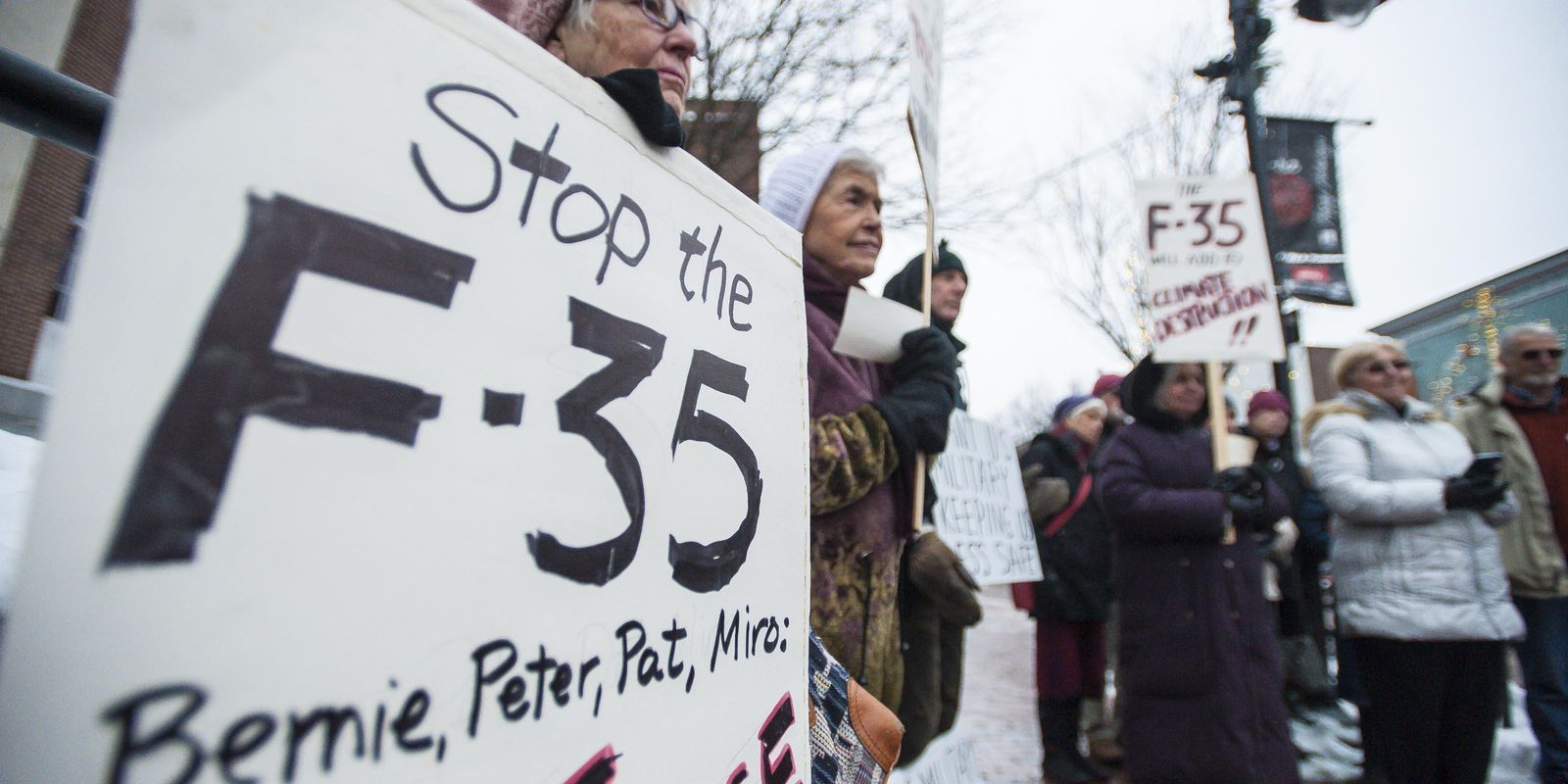 Democrats Trash Constituents Over F-35 Base In Vermont

Above photo: Protesters demonstrate against F-35 being based near Burlington, Vermont. (Getty)

Burlington mayor betrays majority of constituents for what? And why?

On April 11, the mayor of Burlington, Vermont, announced that he was betraying a 55% majority of Burlington voters and a 75% majority of his city council that had opposed basing the F-35 Joint Strike Fighter at the Burlington Airport in South Burlington. The mayor betrayed his constituents in the limpest way, not by vetoing the popular resolution opposing the F-35, but by sending it on without his signature, while appending a dishonest and misleading cover letter inviting unelected leaders to have their way with Vermont. The third-term Democratic mayor has now asked the Air Force to impose its deafening fighter-bomber on a neighboring city for no cogently articulated reason, following a process bereft of integrity, rigor, or honor.

Earlier this year, when Miro Weinberger was in a challenging, three-way race for re-election as mayor of Burlington, he seemed to make promises. He said things that sounded like promises, things that voters reasonably understood to be promises. One of those promises was a deceptively worded non-commitment commitment to reconsider the justice of basing the nuclear-capable F-35 Joint Strike Fighter in the neighboring city of South Burlington, even though South Burlington has no say in the matter.

Weinberger was slip-sliding his way along the F-35 question because he has a long, unambiguous record of supporting the military escalation of the airport in the most populated region of Vermont, and this year voters had finally put the question on the ballot, against serious opposition from officialdom. Weinberger, a former airport commissioner, apparently needed to sidestep a question on which he had never shown any official doubt despite health, safety, military, economic and other evidence that the world’s most expensive weapons system was going to do more harm than good to Vermont. Weinberger was first elected with 58% of the vote in 2012 and re-elected with 68% in 2015. As it turned out, he couldn’t win a majority in 2018. He finished with 48%, enough to avoid a run-off.

That same Town Meeting Day, March 6, 55% of Burlington voters approved a non-binding resolution asking the US Air Force to base the F-35 in some other state and provide the Vermont Air National Guard with a different mission that would be safer, healthier, and more appropriate to a densely populated area in Vermont. On March 26, the Burlington City Council voted 9-3 to send the F-35 removal request to the Air Force along with a number of clarifying questions. This set the stage for Weinberger’s remarkably unheroic stance in favor of further militarizing a neighboring town that his obtuse April 9 letter doesn’t even mention by name (this Orwellian obliteration is also a feature of his April 11 op-ed commentary). This letter to Secretary of the Air Force Heather Wilson is both dishonest and obtuse, asserting in its first paragraph:

As Mayor, I am the only official elected by all City voters, and I am the elected official most directly responsible for the management of the Burlington International Airport.

Weinberger doesn’t quite say “La Cité, c’est moi” like Louis XIV, but the intent is the same. By omission he denigrates the city council, which is also “elected by all City voters.” But every single council member won on March 6 with more than 53% of the vote, and three of them won with greater than 90% majorities. The preference of “all City voters” was pretty clear. Worse, the mayor dismisses the popular vote against the F-35 by people who are “all City voters.” Supporters of the anti-F-35 resolution outpolled the mayor by more than 700 votes. The anti-F-35 resolution drew almost as many total votes as the mayoral race (164 more) and more votes than any other ballot question besides climate change (12 more, approved by 85%). The mayor might ask himself how good the F-35 is for climate change. And lastly, the mayor ignores the reality that the airport is an example of municipal colonialism, located in another city, where voters have no say in the matter. The mayor’s unstated anti-democratic arrogance is staggering. In the letter’s next sentence, he compounds his arrogance with deceit:

After carefully reviewing and considering the Council’s action, the advisory public vote, and current public concerns, I remain a strong supporter of basing F-35s at Burlington International Airport.

There is no evidence in the record to support the mayor’s claim of any care in reviewing and considering the votes of the council or the city. He was dismissive of their views before the election, and now he has formally dismissed them as if they have no weight. He has never shown much care for any “current public concerns” about the F-35, having refused for years to engage with those who express those concerns. And here, again, the mayor relegates the people of South Burlington to nonentities for whom no care is needed. The care he expresses in his letter is only for the Air Force and the Vermont Air National Guard. By the mayor’s own account in a city press release, the only careful review and consideration he engaged in was “consultation with the Vermont Air National Guard (VTANG) and federal officials.” The mayor adds that this is the first time he has refused to sign a council resolution, but he doesn’t explain why beyond his long held, unexamined personal opinion. Is he a militarist? As a former developer, does he have conflicts of interest in the development aspects of this expansion? What’s really going on? He doesn’t say. Instead he reads the minds of the voters, dismissively imputing confusion to them:

The vote signals community concerns about the planned basing. I believe that some of these concerns stem from conflicting and inaccurate information that the public has heard about the F35s. Your [the Air Force’s] responses to the questions in the resolution will help clarify the information being considered by our community.

Astoundingly, he acknowledges concerns, most of which he has already dismissed as meaningless. He does not identify any concern, much less address it. He talks about “conflicting and inaccurate information,” most instances of which have come from the Air Force, VTANG, the Vermont Congressional delegation and their supporters. From the beginning, the F-35 project has been a sugar-coated poison pill that Senator Patrick Leahy and his allies have expected the public to swallow gratefully before they find out too late who damaged them. The mayor is sleazily non-specific here, at least in part because his case is weak. Nowhere in his letter does the mayor address a single specific issue. One measure of his argument’s weakness is that he asks an interested party – the Air Force – to tell the customer why this clunker is such a bargain. A mayor with intellectual integrity would address what he sees as important issues, or better yet he would seek some disinterested process for sorting out facts from propaganda (including his own). Ironically, the Air Force was originally opposed to basing the F-35 in a populous area like Burlington, so maybe they could clarify why that’s different now that there are even more people here. But the mayor isn’t really concerned with informing people truthfully, as he makes clear:

The vote [for the anti-F-35 resolution] also is an indication of some local opposition to the basing. The extent of the opposition demonstrated by the vote is difficult to measure, however, as the ballot item wording was confusing, and premised on the existence of a less impactful alternative mission. Also attached is an analysis of the ballot item performed by a respected local professor that expands on these concerns about the ballot question.

Supporters of the F-35 have avoided serious discussion of the plane as much as possible for a decade. They have never supported any democratic decision-making. The Burlington vote is only the second referendum on the F-35. The first, in Winooski in 2013, also resulted in popular rejection of the warplane. Weinberger mocks this as “some local opposition to the basing” as a way of evading the reality that F-35 shills have gone out of their way to avoid knowing any more about the opposition than they have to. Theirs has been a deliberately anti-democratic approach all along, including an electoral coup funded by dark money against the South Burlington city council when serious opposition emerged there. So when Weinberger says, with unintended irony, that the “extent of the opposition demonstrated by the vote is difficult to measure” that’s mainly because he has absolutely no interest in measuring it.

Instead, Weinberger raises a VTANG talking point with no demonstrable substance: “the ballot item wording was confusing,” which is what F-35 supporters tried to make people believe. The ballot item might have been cleaner, but its fundamental meaning was clear enough as indicated by the numbers of people who voted for or against it. Weinberger and VTANG’s specious argument is that no one can support VTANG without supporting the F-35. They rarely put it that clearly, but that’s what it always comes down to. The ballot item argued that people could support VTANG and oppose the F-35. That argument makes them crazy. It forces them to deal with the substance of the F-35 instead of dancing their little patriotic flag-waving jig in favor of a weapon of mass destruction designed to carry out war crimes.

The fight over the F-35 in Vermont is a minuscule example of how hard it is to resist the military-industrial-congressional complex. Senator Leahy can wax lyrical about gun control in Vermont, but the devoted F-35 champion shows by his actions that his disregard for the people around the airport in South Burlington is little different from his disregard for the US-Saudi genocidal bombing of another, larger poor community in Yemen. Congressman Peter Welch has shown more interest in regulating unmanned private drones that he has in protecting any of his constituents from the F-35, much less challenging American-backed disease and famine warfare against Yemen. These people, like Weinberger, are Democratic establishment career politicians, but there is no Republican objection to the F-35 either.

Senator Bernie Sanders – famously an Independent – was the mayor of Burlington before there was an F-35. But as a congressman and senator, Sanders has consistently supported basing the plane in Vermont. In a TV appearance March 30, Sanders performed a typical soft shoe, referring to the F-35’s huge cost over-runs as a legitimate concern, but basically shuffling off the decision to Weinberger, even though Sanders said he could see “no alternative” to having the F-35 in Vermont. There are, of course, alternatives, but Sanders like others chooses not to see them. For Sanders, this is more an issue of faith than reason, this is about some strange sort of totemic hero worship:

“for many, many reasons I think the national guard deserves to have that plane here”

The National Guard deserves to have a weapon of mass destruction in Vermont? What kind of argument is that? This is not an argument at all. This is a shared article of faith among F-35 worshippers. Maybe they deserve to have sacrificial virgins, too. Are we going to go there? And what does the rest of Vermont deserve? Maybe it deserves a political leadership class less in thrall to the national war machine that has been out of control for decades and needs serious reining in.

William M. Boardman has over 40 years experience in theatre, radio, TV, print journalism, and non-fiction, including 20 years in the Vermont judiciary. He has received honors from Writers Guild of America, Corporation for Public Broadcasting, Vermont Life magazine, and an Emmy Award nomination from the Academy of Television Arts and Sciences.