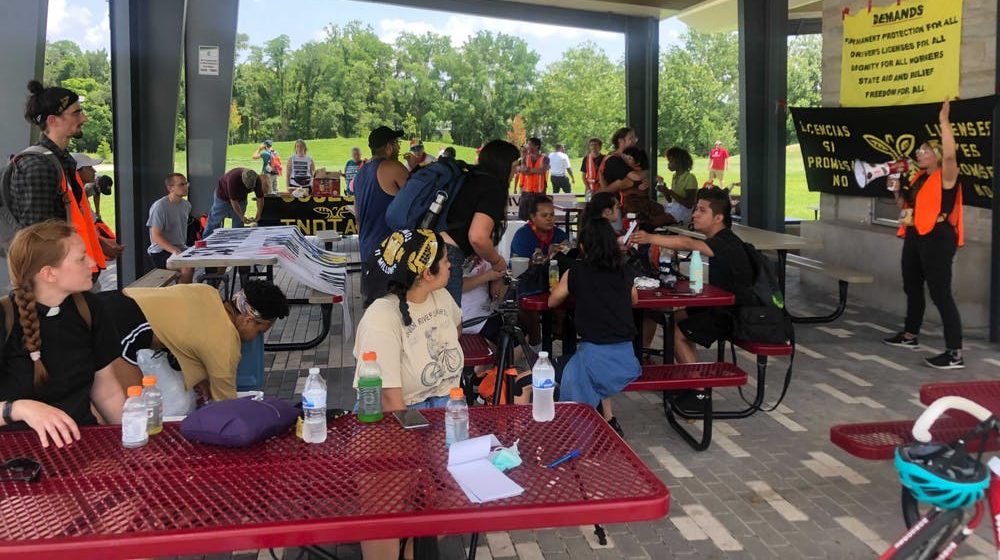 Demonstrations In Bloomington During 300-Mile ‘Walk For Licenses’

The march in Bloomington

Undocumented immigrants, immigrants and allies of the community passed through Bloomington Thursday on day six of their seven-day, 300-mile “Walk for Licenses” through Indiana, according to a press release from Cosecha Indiana.

The goal of the walk, which started Saturday in Gary, Indiana and East Chicago, is to bring attention to the need for drivers licenses for undocumented Indiana residents, according to the release. The walk will end in Indianapolis on Saturday.

Cosecha Indiana, which organized the walk, is a part of a national movement, working towards permanent protection, dignity and respect for all immigrant workers, according to their Facebook page

The group started in Switchyard Park before marching to Sample Gates and then to the Islamic Center of Bloomington. Afterwards, a vigil took place at 6 p.m at First United Church.

Why people were marching

Dominga Cortes, who has participated in the walk since Saturday, said that she hopes the walk will make the issue of driver’s licenses for the undocumented visible to legislators. She said many members of her community are afraid to drive because getting pulled over could mean deportation.

Cortes said having a driver’s license is important for basic needs like driving her kids to school or groceries, but also for more dire situations, like driving to the hospital.

Cortes has a daughter with special needs who she has to drive to doctor’s appointments in Indianapolis from Chicago, she said.

“Although I can get in the car and drive, I drive under the fear of getting stuck, getting deported with my child being left,” she said.

Cortes also has an 18 year old son who is a U.S. citizen but hasn’t been able to get his license because he doesn’t have a supervised driver to drive with him and sign off on his practice hours, she said. It’s very frustrating for him, she said.

Cortes, who lives 10 minutes from the Illinois border where undocumented immigrants are allowed to obtain a driver’s licenses, said she is fighting for her community.

“This is not just about me. This is about our whole community in Indiana that deserve respect and dignity,” she said. “The bare minimum that they deserve is a driver’s license.”

Earlier this year, legislation that would allow undocumented immigrants in Indiana to obtain licenses was introduced as House Bill 1138 and Senate Bill 319. Similar bills have been introduced in past legislative sessions but haven’t advanced out of committee, according to the release.

Evelyn Sanchez, a senior at IU, joined the group in Bloomington. She said as a DACA recipient she feels she has a lot of privilege in being able to obtain a driver’s license. The older generation in her family doesn’t have the same privilege, she said.

“It’s also very scary to know that there’s a risk of my mother, or my uncle or someone being deported just because they have a tail light that went out that they didn’t know about,” she said.

When she was younger and would miss the bus she worried about her mom having to drive her to school. She’s seen the anxiety driving gives her parents, she said.

Wendy Catalan Ruano, an organizer for the walk, said she hopes the walk empowers the more than 11 million members of the undocumented community in the U.S. She said the walk has been a success thanks to community members all over Indiana who have provided food and shelter.

The walk will end Saturday in Indianapolis where there will be a rally at Monument Circle and the group will partake in the Black-n-Brown Get Down at 2020 N. White River Parkway West Dr., she said.