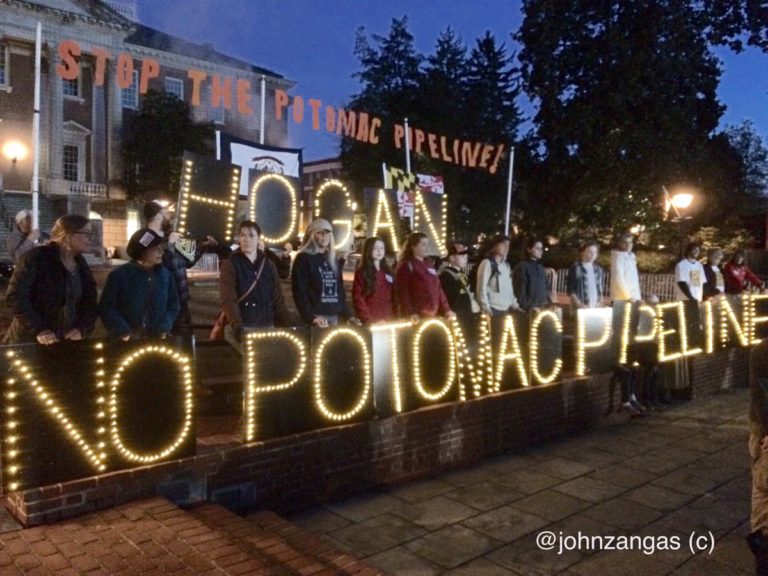 Grassroots groups put on a light display outside the Governor’s Mansion in Annapolis in Feb. 2017 hoping to pressure Gov. Larry Hogan to stop the Potomac Pipeline.

A Maryland administrative board has denied Columbia Gas a necessary permit for it to build a controversial gas pipeline across the Potomac River. By a unanimous vote, the Maryland Board of Public Works rejected a right-of-way easement for the Eastern Panhandle Expansion, commonly known as the Potomac Pipeline. Without the permit, the gas company cannot lay pipeline underneath the Maryland Rail Trail, putting the entire project in jeopardy.

The Board of Public Works consists of the governor, the comptroller and the treasurer. Governor Larry Hogan, who cast one of the three no votes, said that he was surprised that the easement was even on agenda for January 2, not realizing that the item had been deferred from the December 19 meeting. (He was absent that day.)

Columbia Gas, a subsidiary of TransCanada Corp., has obtained key permits for the 3.4-mile pipeline, including a certificate from the Federal Energy Regulatory Energy Commission and a waterways permit from the Maryland Department of the Environment. It proposes to transport gas from Fulton Co., Pa. though Maryland to Morgan Co., W.Va. by passing underneath the Potomac River. Over the last two years, a vociferous grassroots opposition grew against the pipeline. Among their concerns are the risks of drilling under the Potomac River in an area of fragile geology prone to collapse and porous enough to facilitate contamination of the ground water.

With key permits in place, the pipeline this fall seemed within weeks of being under construction. The BPW decision has now changed the playing field.

It may be a mortal blow to the project, but perhaps not the coup de grâce. While Columbia Gas cannot re-apply for the permit, it now has three choices to proceed, according to Walls. It can either abandon the project altogether; initiate legal action against the state to force it to grant access; or devise a different route for the pipeline, which would still require a Potomac crossing. All three could result in significant delay, he says. Re-routing in particular would mean going back to the drawing board to start the permitting process all over again, applying to FERC, Pennsylvania, Maryland and West Virginia for permits. If Columbia Gas files a lawsuit against Maryland, the amount of delay that would result would depend on “whether the state holds strong and defends its decision,” Walls says.

The Maryland Rail Trail runs along the Potomac River parallel to the C&O Canal adjacent to National Park Service land. Columbia Gas also still awaits a decision on a permit from the National Park Service, which must grant a right-of-way to cross the C&O Canal at Hancock, Md. NPS has asked Potomac Riverkeeper Network, Chesapeake Climate Action Network and others for more information before making a decision. Walls believes they might be holding off until the courts resolve recent challenges to the Mountain Valley Pipeline and Atlantic Coast Pipeline in Virginia related to crossing Park Service land.

Walls points out that there’s even more at stake than the Potomac Pipeline itself. If it is built, it would transport fracked gas to the Eastern Panhandle of West Virginia and possibly industrialize an area dependent on agricultural and tourism.
If the Potomac Pipeline is dead in the water, then more projects depending on it will fail.

Construction is almost completed on the Mountaineer Gas Pipeline in Morgan and Berkeley Counties which would meet up with the Potomac Pipeline at the river crossing. Despite all the damage done during construction, Tracy Cannon of Eastern Panhandle Protectors is upbeat about the pipeline laying idle.

“It means that for the time being anyway, there’s not going to be any gas going through that line. No gas means no explosions. If there’s just a pipeline, all the damage that’s been done is sedimentation issues,” she said. “As far as I’m concerned, they can turn the whole pipeline easement route into a giant ski slope.”

Mountaineer Gas recently asked for and received approval from the West Virginia Public Service Commission to build an extension of the pipeline into Jefferson County to supply Rockwool. The factory has raised a hornet’s nest of angry protest in the county about huge subsidies awarded to Rockwool and the planning of the project out of the public eye.

Like the trunk line of the Mountaineer Gas Pipeline, the extension into Jefferson County has been approved without permits being in place for the source of the gas–the Potomac Pipeline.

On the other hand, she’s pessimistic that the PSC is willing to or even has the power to rescind its approval.

“The PSC unfortunately was bound by West Virginia law. The law basically says, pipelines are great, fracking is great, and West Virginia has to build more pipelines. So they’re kind of stuck, you know?” she said. “So I think the PSC was bound to do what they did, no matter what we said. I don’t believe the PSC commission will change their mind.”

As it stands, the Eastern Panhandle must deal with an absurdity: Mountaineer Gas is at liberty to lay a gas pipeline with no source of gas to the equivalent of nowhere–an industrial park in Jefferson County with no sewer or water infrastructure funding in place where the industrial park’s sole occupant, Rockwool, currently has no building permit.