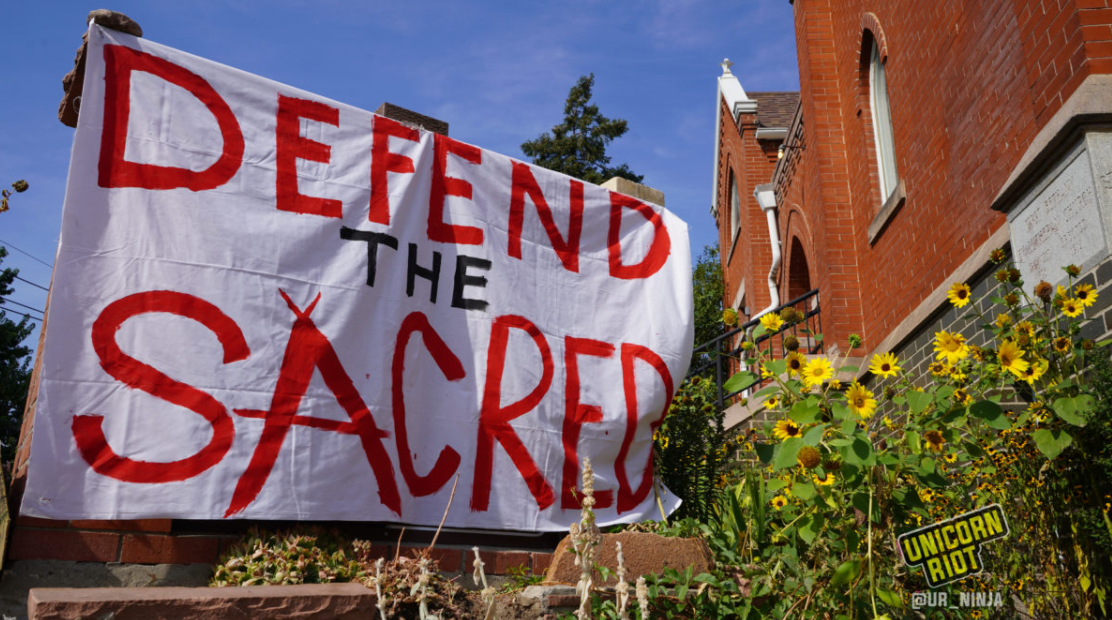 Denver, CO – Under the hardline stance of Mayor Michael Hancock, Denver continues to sweep unhoused encampments—more than 80 this year alone—ignoring countless requests from unhoused residents and their advocates to stop, and refusing to negotiate any alternatives. Outside the Four Winds American Indian Council building in the Baker neighborhood, that cycle continued when, despite multiple attempts by Four Winds and other advocates to find some common ground and a different solution, the city swept a predominantly Indigenous encampment on August 31.

“It’s kind of unfortunate that the Mayor decided that he’s going to say that [the encampment] is unsafe and unclean without even being here, without even visiting and seeing it first-hand and being willing to sit down with our relatives and hear their stories and even break bread with them or anything like that.”

A week later, Four Winds held a vigil to remember and honor those displaced and harmed from the city’s sweeps.

When a sweep first seemed imminent, members of Four Winds including Board Chair Mateo Parsons met with an official with Denver’s Department of Housing Stability to try to stop the sweep, but the city wasn’t budging.

Parsons and others decided to organize a grassroots letter writing campaign directed at the Mayor, members of his administration, and every member of city council. They had three asks:

2) Work with our community to develop a Native preference safe outdoor space (SOS), which is a city-sanctioned camping site for unhoused people that is directly connected with resources

However in mid-August 2021, city workers posted an official notice for the sweep. On August 30, Four Winds and other Indigenous community members had a virtual meeting with the Mayor, representatives from the Department of Housing Stability and several members of Denver City Council, and presented the three demands again. “The Mayor was unwilling to negotiate on stopping the sweep,” Parsons recalls.

When someone asked the Mayor over the video conference if he would be willing to come down to the camp and speak with the residents, he reportedly said he couldn’t because he was on vacation.

Early in the morning on August 31, city workers and contracted workers with private clean-up company Environmental Hazmat Services (whose lucrative contracts with Denver we’ve reported before) built a temporary chain link fence around the perimeter of the encampment essentially forcing them to pack up and move while being caged in.

Since September 22, 2020, the city builds temporary fences around encampments the morning of a sweep (sometimes the night before). The city says it’s for safety reasons and to keep protesters out, but Parsons says, “it also has the effect of cutting off service providers and other non-profits like Four Winds American Indian Council from being able to render aid and provide help to folks who are being displaced in that moment.”

Below is our video from that first September 2020 sweep where a fence was erected. We interviewed Terese Howard from Denver Homeless Out Loud who shared a similar perspective to Parsons’ on the fence: “It’s really a divide and conquer technique that puts a literal division between the community that is here to support, and the residents of the camp that need that support.”

Another reason for the vigil on September 6, 2021 was to highlight the excessive duration of the fence.

Once a sweep is done and the area is vacant, the fence is typically taken down within a few days, however, at Four Winds, the fence was still up a week later. Parsons told us that the city refrained from telling them when the fence would be taken down. “Our people are being dehumanized in this way,” shared Parsons.

“I don’t know what there is to do other than to try to give as much voice to our unhoused relatives when violence is happening to them as possible. And they asked us for this, they asked us to come and raise awareness about the fact that this fucking fence is still up.”

Sharon, one of the encampment residents, spoke at the vigil. She shared some of the life-and-death situations she and her fellow unhoused neighbors face every day. She mentioned a camp on East Colfax of Indigenous elders, some of whom have disabilities, that has dealt with multiple robberies. She recounted a recent incident where a man was “robbed, and they beat him, stabbed him, and threw him in the trash can.” Someone else she knows who lived there was raped and beat up.

At camps Sharon has stayed at, she says camp residents have been threatened to be run over by housed people in the middle of the night. Since they have to set up their tents in the grass between the sidewalk and the street, that puts them in a vulnerable spot. She also says they’ve had rocks thrown at them, and that people come by in the middle of the night and threaten to set them on fire.

“That’s not something we should have to be able to put up with, and I’ve talked to the police about it, and they basically said it’s our problem, we’ve gotta take care of it. And, it’s not. They’re supposed to take care of us, secure us just like anybody else, but since we’re on the street they don’t think they have to do that.”

She also mentioned sex trafficking. “It’s scary. For any of us out here, they can approach us in the middle of the night, you never know.”

Sky Roosevelt-Morris, with Four Winds American Indian Council, brought everyone’s attention to the Baker neighborhood and how “it’s these guys around us that are consistently calling the cops and calling the Mayor’s office. It’s this neighborhood that has a problem with unhoused relatives.”

Even though the sweep happened, Parsons, Roosevelt-Morris, and unhoused residents like Sharon are still pushing for better treatment and for tangible, supportive solutions. Parsons told us that they are “still in talks with the city to try and get this Native preference outdoor space set up.”

He also told us that with cold weather approaching, “if the city is intent on taking away people’s heaters and their supplies and everything that’s gonna keep them safe and alive on the streets during the winter, we’re committed to continue going out there and giving that to people because that’s what we’re about; we’re about making sure that our people stay alive, they stay safe, they stay healthy.”

On Monday September 13, Denver City Council voted to continue the city’s contract with private clean-up company Environmental Hazmat Services. Since contracting with them three years ago, Denver has paid the company $1.57 million.

“It’s unfortunate that so far, the city is more willing to spend money on violently displacing Native people from stolen Native land than providing humane solutions to get at the root causes of what’s causing homelessness, and what’s causing particularly for Native people, what’s causing this to happen, what’s the history. What are the policies that put us in the position that we are in now, and how do we proactively step up to rectify it? I haven’t seen that commitment from the city at all.”

The fence outside Four Winds American Indian Council was taken down sometime following the vigil, allegedly by concerned citizens.