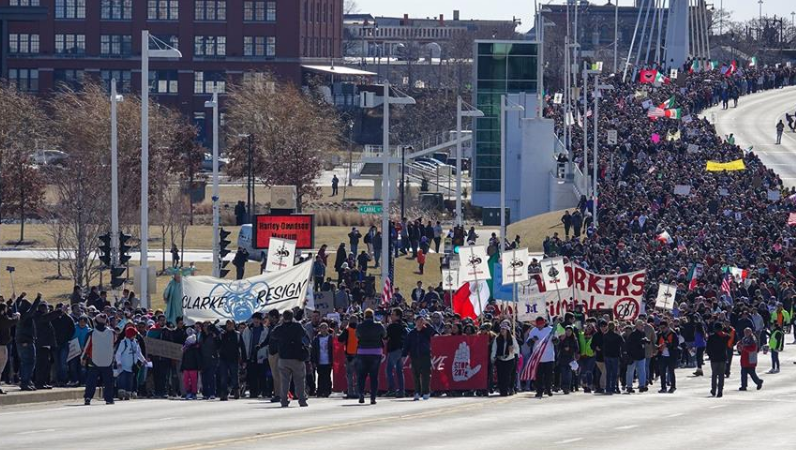 From #DayWithoutLatinos to Rapid Response Teams

From work strikes to legal campaigns, multiple efforts have been mounted to resist the Trump administration’s immigration crackdown, which has instilled fear and panic in communities across the United States.

Recent raids have impacted “nearly 200 people in the Carolinas and Georgia, more than 150 in and around Los Angeles, and around 40 in New York,” according to the Associated Press on Sunday. Raids also reportedly took place in Arizona and Chicago. President Donald Trump on Saturday said the raids were “merely the keeping of my campaign promise.”

Officials said the raids targeted known criminals, but they also netted some immigrants without criminal records, an apparent departure from similar enforcement waves during the Obama administration. Last month, Trump substantially broadened the scope of who the Department of Homeland Security can target to include those with minor offenses or no convictions at all.

The American Civil Liberties Union (ACLU) told ABC News on Sunday that it was creating a “rapid response team” to combat a potential rise in deportations under Trump.

“This administration is just getting started and we’re anticipating much worse,” senior attorney Lee Gelernt told the outlet in a phone interview, citing Trump’s language as reason to fear that this administration’s approach will be harsher than that of former President Barack Obama. “His rhetoric is already scaring a lot of people in immigrant communities.”

According to ABC, “[t]he rapid response team would bring together the ACLU, private law firms, and local community groups to ensure that individuals facing deportations have access to counsel right away.”

Meanwhile, across the southern border, a coalition of prominent Mexican officials, legislators, and other political figures are reportedly ready to create a “backlog” in the U.S. immigration courts system in an effort to make mass deportations nigh-impossible—and to give potential deportees the legal representation they often lack.

At the same time, other forms of resistance are spreading.

In Los Angeles on Sunday, according to the Associated Press, United Methodist Pastor Fred Morris

handed out a double-sided sheet listing congregants’ civil rights: Don’t open the door to anyone without a warrant. Don’t talk. Don’t sign any document.

He is planning a community meeting for Monday night.

“The only weapon we have,” he said, “is solidarity.”

To that end, Our Revolution, the grassroots political organization launched to harness the energy of Bernie Sanders’ presidential campaign, is asking supporters to “pledge to take action locally to protect immigrant families and stop the raids.”

And on Monday in Wisconsin, at least 120 businesses are closed and thousands are expected to participate in a “Day Without Latinxs, Immigrants, and Refugees.” The action is directed at Milwaukee County Sheriff David Clarke, who has declared his intention to enroll his department in the federal 287(g) program, deputizing his sheriffs to act as Immigration agents. A march from the offices of immigrant rights group Voces de la Frontera to the Milwaukee County Courthouse is scheduled for 11:00amlocal time.

UPDATE: More than 120 businesses were closed in Milwaukee and more than 150 total across the state.

More photos from Joe Brusky of the Day Without Latinos March in Milwaukee.