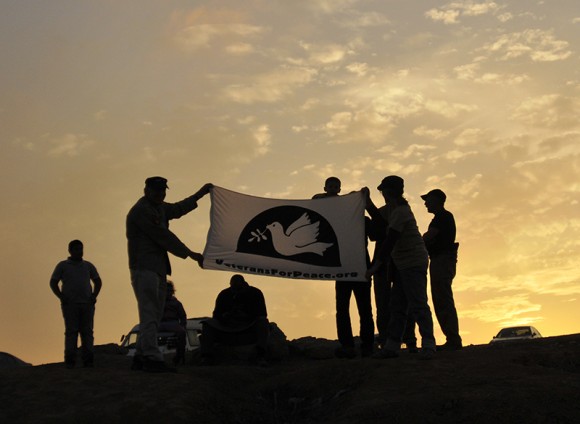 The sun sets behind members of Veterans For Peace as they conclude their visit to Al-Araqeeb. Photo by ELLEN DAVIDSON

Excerpted from Free Radicals: War Resisters in Prison by CJ Hinke, forthcoming from Trine-Day in 2016.

There are as many reasons to desert military service as there are deserters. All countries’ militaries like to snatch young men when they are uneducated, inexperienced, and unemployed. It takes a soldier far greater courage to throw down his weapon than to kill a stranger.

There are deserters in every country that has an armed forces. Armies demand blind obedience and human beings crave liberty.

Why do men desert? Certainly not from cowardice. It takes far more courage to break from the pack and its reliance upon rabid nationalism. 36% of men facing battle for the first time were more afraid of being labeled a coward than of being wounded or killed.

All these diagnoses have at one time been banned and mentions censored, even in medical journals. The goal of treatment being, of course, to send soldiers back to war. 600,000 were discharged from the US Army alone for neuropsychiatric complaints. As noted by Fortune magazine, at the start of World War II, “25 years after the end of the ‘Great’ War, nearly half of the 67,000 beds in Veterans Administration hospitals are still occupied by the neuropsychiatric casualties of World War I.” More than one-quarter of all World War II casualties were psychiatric.

Deserters are hardly cowards. Many simply were not willing to kill after joining the military. Others experienced an ideological crisis. Some had needy families at home. Country right or wrong? What nonsense!

“Desertion” is a pejorative term in human society. We think of them as “returners” from the madness of all war. We’re waiting for them to come home, proud that they never had to kill anybody.

Although the US penalty for desertion during wartime remains death, no American deserter has served more than 24 months since September 11, 2001. The Nuremburg Principles require a soldier to refuse any orders which may result in the commission of crimes against humanity. (And what else is war!)

US Civil War (1861-1865)
The north’s Union Army faced far greater desertion than the south’s Confederacy. More than 87,000 deserters were recorded from only three northern states, 180,000 deserters in total by war’s end. The south is said to have lost 103,400 to desertion through the war, including whole units of soldiers. However, as many as 278,000 of 500,000 troops were missing by war’s end. Mark Twain deserted from both sides. William Smitz of the North’s Pennylvania Volunteers was the last deserter shot by firing squad in 1865.

World War I (1914-1918)
240,000 British and Commonwealth soldiers were court-martialed and 346 were executed for desertion, cowardice, quitting a post, refusing an order, or casting away arms out of 3,080 death sentences during the “War to End All Wars”, including 25 Canadians and 22 Irishmen. They are commemorated by the Shot at Dawn Memorial in Staffordshire. The memorial was modeled on 17-year old Private Herbert Burden, blindfolded and tied to a stake. Almost all of these deserters’ names were not added to war memorials. Some, though not nearly all, have been pardoned posthumously by the British government. A few refused a blindfold when facing a firing squad, choosing to look them in the eye. (And these are cowards?!?)

More than 600 French soldiers were executed for desertion.

15 German soldiers were executed for desertion.

28 New Zealand deserters were sentenced to death and five were executed. These soldiers were posthumously pardoned in 2000.

The US military recorded 21,282 deserters and President Woodrow Wilson commuted all 24 death sentences for deserters.

World War II (1939-1945)
More than 21,000 American deserters were tried and convicted of desertion during “The Good War”. Although 49 were sentenced to death, only one, Private Eddie Slovik, a soldier who had volunteered to clear mine fields, was executed by musketry on January 31, 1945 at Sainte-Marie-aux-Mines in France. His final declaration was, “I’ll run away again if I have to go out there.”

Supreme Allied Commander and later US President, Dwight D. Eisenhower, confirmed Slovik’s death sentence, claiming “it was necessary to discourage further desertions”. Slovik stated, “They’re shooting me for the bread and chewing gum I stole when I was 12 years old.”

Slovik’s execution was hidden from French civilians. He was bound at arms and torso, knees, and ankles and hung from a spike on a six-by-six post against the stone wall of a French farmhouse. 12 soldiers were issued M-1 rifles, only one of which contained a blank round. After the first volley, Private Slovik didn’t die; he died as the soldiers were reloading. Eddie Slovik was the first American deserter to be executed since Lincoln was President. He was 24.

Slovik was buried in a numbered grave in Row 3, Grave 65 of Plot “E” alongside 95 US soldiers executed for rape and murder, until 1987 when President Ronald Reagan ordered the return of his remains. He is buried in Detroit, next to his wife, Antoinette. She had petitioned seven US presidents for his return until she died in 1979, never having received GI medical benefits.

World War II saw 1.7 million US courts-martial, one-third of all American prosecutions. In May 1942 alone, there were 2,822 desertions from duty.

More than 1,500 Austrian soldiers deserted the German Wehrmacht. A campaign to remember them was started in 1988 with the theme, “Desertion is not reprehensible, war is”. In 2014, they were honoured by a monument, the Memorial for the Victims of Nazi Military Justice. The sculpture sits in Vienna opposite the Austrian Chancellory and President’s office. It is inscribed simply with just two words, “all alone”.

In Germany, more than 15,000 soldiers were executed for desertion by the Nazi regime. They were commemorated in 2007 by the Deserteur Denkmal in Stuttgart. It is dedicated “To the deserters from all wars”.

The Soviet Union, throughout its history 1917-1991, executed 158,000 deserters and jailed 135,000 Red Army officers. A further 1.5 million Soviet prisoners of war under the Nazis were sent to Siberian gulags on their repatriation due to disaffection in the ranks.

US Army Sergeant Bowe Bergdahl was charged with desertion and “misbehavior” before the enemy after abandoning his post in Afghanistan in 2009. He was held captive by the Taliban for five years before being exchanged in 2014 for six high-ranking Afghans held by the US in their extrajudicial prison base at Guantánamo Bay, Cuba. One died before the exchange so five Taliban were released by the US, the army chief of staff, deputy minister of intelligence, a former minister of the interior, and two senior commanders. The Taliban originally demanded $1 million and the release of 21 Afghan prisoners along with a Pakistani scientist who killed US soldiers. (President Obama actually does ‘negotiate with terrorists’. The Commander-in-Chief took a publicity photo-op with Bergdahl’s parents in the Rose Garden.)

It appears the young sergeant is being prosecuted because, were he not, he could demand compensation from the US government due a prisoner of war. (The US can spend trillions on wars, and pay for a court-martial but refuses to compensate one soldier!) Bergdahl faces a life sentence at court-martial.

So what was this home-schooled Idaho boy who studied fencing and ballet, never owned a car and rode everywhere by bicycle doing in the military, anyway? Hint: the military maw will take any cannon fodder it can get! Bowe went from a year-long retreat at a Buddhist monastery direct to infantry school at Fort Benning. Like Pvt. Slovik, Sgt. Bergdahl, announced his intention to “walk away into the mountains of Pakistan”., taking only his compass.After he began to learn Pashto, Bergdahl spent more times with Afghans than the soldiers of his ‘counterinsurgency’ unit. He wrote his parents he was “ashamed to be an American” and considered renouncing his US citizenship, a small detail buried by the White House. His parents wrote back, “OBEY YOUR CONSCIENCE!”

64% of Canadians were polled to ask their government to accept US military refugees after two motions for compassion were passed in Parliament in 2008 and 2009. Hundreds of American deserters have fled to Canada.

However, these legislative efforts were non-binding. The Canadian government has adopted a harsh policy of deporting deserters to the US, in marked contrast to the Vietnam period, and many young Americans simply go underground in Canada.

The BBC commented on the precedent-setting case of Iraq war resister Jeremy Hinzman in 2004: “Americans in trouble have been running to Canada for centuries… in the wake of the American Revolution…[and in the] Underground Railroad that spirited escaped American slaves to freedom…”.

Although I counselled, aided and abetted hundreds of Vietnam draft refusers throughout the 1960s as part of the Student Peace Union, The Resistance, and the Central Committee for Conscientious Objectors, I had little contact with American deserters. I first advocated desertion in a large, public Gensuikin demonstration in front of the huge US military base deploying troops to Vietnam in Naha, Okinawa, in 1969. I arrived by ship and left in a private plane.

I still advocate, counsel, aid and abet desertion by anyone in military service anywhere. Deserters are not only national heroes. They are global heroes who have refused to kill civilians and soldiers on foreign soil.

You can do no greater good than refusing to kill. If you are in the military, anybody’s military, do the right thing: RUN AWAY!