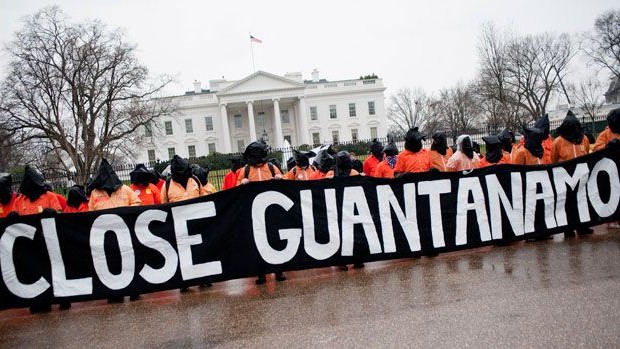 Above: Protestors rally in front of the White House to demand that President Obama keep his promise and shut down the detention center at Guant¡namo Bay. Pete Marovich/Zuma.

The military says it will no longer report the number of prisoners on hunger strike, according to a report in the Miami Herald. A spokesman for the facility said the military “will not further their protests by reporting the numbers to the public.”

Eighty-six of the remaining prisoners — more than half — were designated three years ago for transfer to another country, provided that security concerns could be satisfied. Yet the transfer plan was left adrift in the face of political combat. Even if the new defense bill spurs progress in reducing the detainee population, the delivery of credible justice for those at the Guantánamo prison camp is far from complete.
(from NYTimes Editorial – Dec. 28, 2013)

Our community will gather in Washington DC from January 6-13 to engage in an 8 day, liquid only fast.  We invite folks to join us for a day, for the duration, in DC, or at home.

Let us know if you can come, or if you plan to join us in fasting.  For those participating from afar, we will have resources available, daily updates, and two conference calls with the fasting community in DC.  For those in DC, we will provide housing from Jan. 5-14.

In addition to the fast, we will be engaging in daily activities to highlight the ongoing crimes of Guantanamo, Bagram, indefinite detention, drones, and lack of accountability for torture.

*e-mail witnesstorture@gmail.com to sign up to come to DC in January
*there will be a conference call the week of Dec. 30th for those coming to DC

JOIN THE MARCH IN WASHINGTON DC

JANUARY 11 DAY OF ACTION AGAINST GUANTANAMO

Rally and procession to mark the 12th anniversary of Guantánamo, and to demand its closure.

• Noon – Gather for rally and witness at the White House (1600 Pennsylvania Ave. NW)

This January 11, 2014 marks the unacceptable 12th anniversary of indefinite detention without charge or trial at Guantánamo. Join us in Washington, D.C. to witness this anniversary together, and to call on President Obama to finally fulfill his broken promise to shut it down. Obama has the power to close Guantánamo, and the new National Defense Authorization Act (NDAA 2014) just approved by Congress makes it even easier for him to do so. 158 men remain detained at Guantánamo; most should never have been detained in the first place and are entering their 13th year of being deprived of their liberty without any charge or trial. They must be tried in a fair court or released; Guantánamo must be shut down.

In response to the Hunger Strike at Guantanamo, WAT has organized a rolling fast which will continue until January.  We are so grateful to the over 200 people who have been so committed to the rolling fast these last few months, and welcome anyone who would like to join the fast in December and beyond!  Please take a look at the December rolling fast calendar and consider participating.  After choosing when you would like to fast, please email the date/s to witnesstorture@gmail.com

Post any pictures of your local activities to http://www.flickr.com/groups/witnesstorture/, and we will help spread the word on http://witnesstorture.tumblr.com/

Witness Against Torture is completely volunteer driven and run.  We have no paid staff, but do have expenses associated with our organizing work.  If you are able, please donate here.

• Close Guantánamo: all detained people must either
be charged & fairly tried, or be released
• End indefinite detention & remove detention provisions in the National Defense Authorization Act
• End unlawful killings with drones and other weapons
• Ensure accountability for torture, unlawful killings
& other abuses