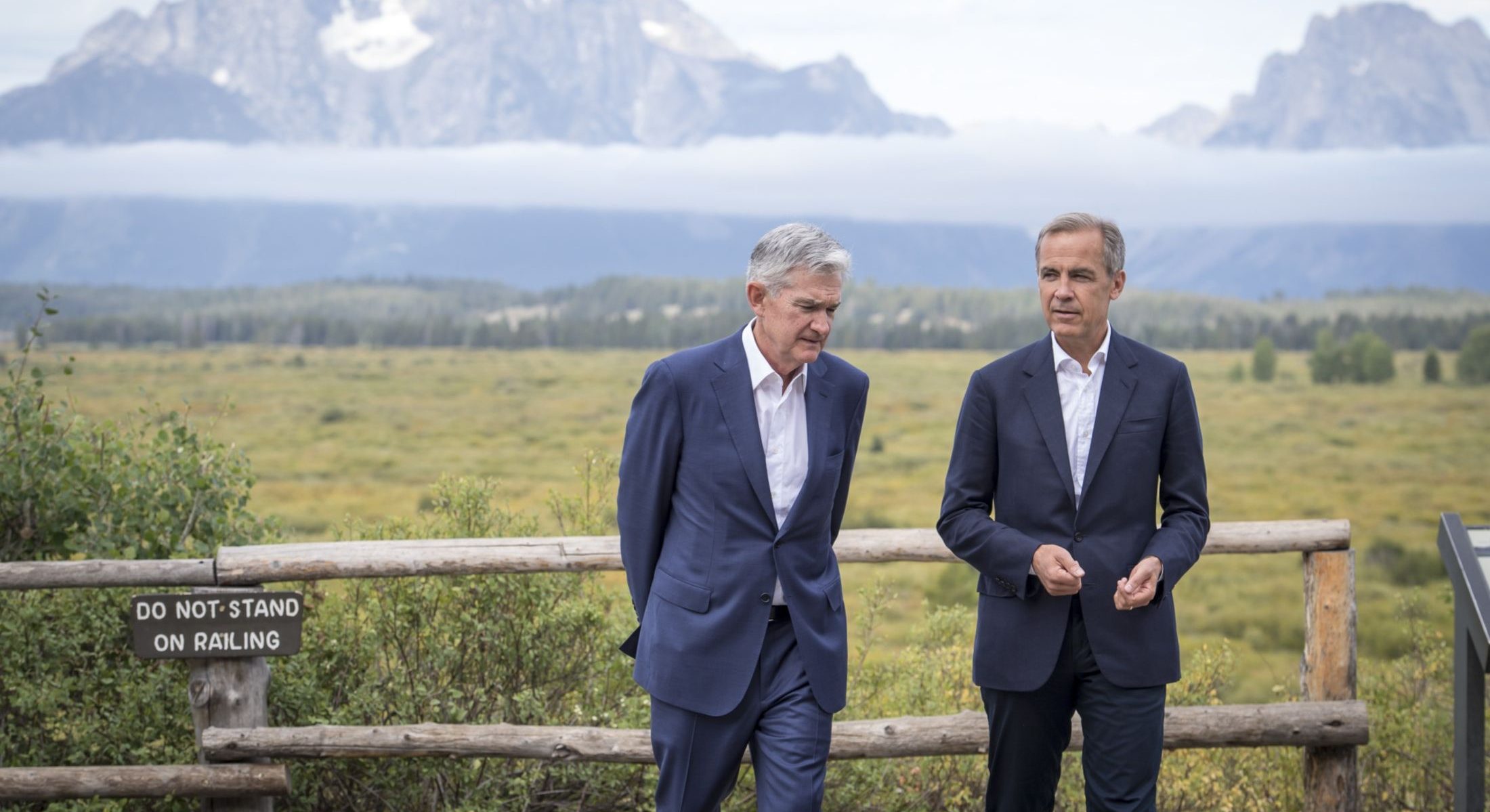 Above photo: Jerome Powell and Mark Carney, governor of the Bank of England (BOE), walk the grounds during the Jackson Hole economic symposium.

Conceding that their grip on the economy is slipping, central bankers are proposing a radical economic reset that would shift yet more power from government to themselves.

Central bankers are acknowledging that they are out of ammunition. Mark Carney, the soon-to-be-retiring head of the Bank of England, said in a speech at the annual meeting of central bankers in August in Jackson Hole, Wyoming, “In the longer-term, we need to change the game.” The same point was made by Philipp Hildebrand, former head of the Swiss National Bank, in an August 2019 interview with Bloomberg. “Really there is little if any ammunition left,” he said. “More of the same in terms of monetary policy is unlikely to be an appropriate response if we get into a recession or sharp downturn.”

“More of the same” meant further lowering interest rates, the central bankers’ stock tool for maintaining their targeted inflation rate in a downturn. Bargain-basement interest rates are supposed to stimulate the economy by encouraging borrowers to borrow (since rates are so low) and savers to spend (since they aren’t making any interest on their deposits and may have to pay to store them). But over $15 trillion in bonds are now trading globally at negative interest rates, yet this radical maneuver has not been shown to measurably improve economic performance. In fact  new research shows that negative interest rates from central banks, rather than increasing spending, stopping deflation, and stimulating the economy as they were expected to do, may be having the opposite effects. They are being blamed for squeezing banks, punishing savers, keeping dying companies on life support, and fueling a potentially unsustainable surge in asset prices.

So what is a central banker to do? Hildebrand’s proposed solution was presented in a paper he wrote with three of his colleagues at BlackRock, the world’s largest asset manager, where he is now vice chairman. Released in August to coincide with the annual Jackson Hole meeting of central bankers, the paper was co-authored by Stanley Fischer, former governor of the Bank of Israel and former vice chairman of the U.S. Federal Reserve; Jean Boivin, former deputy governor of the Bank of Canada; and BlackRock economist Elga Bartsch. Their proposal calls for “more explicit coordination between central banks and governments when economies are in a recession so that monetary and fiscal policy can better work in synergy.” The goal, according to Hildebrand, is to go “direct with money to consumers and companies in order to enliven consumption,” putting spending money directly into consumers’ pockets.

It sounds a lot like “helicopter money,” but he was not actually talking about raining money down on the people. The central bank would maintain a “Standing Emergency Fiscal Facility” that would be activated when interest rate manipulation was no longer working and deflation had set in. The central bank would determine the size of the Facility based on its estimates of what was needed to get the price level back on target. It sounds good until you get to who would disburse the funds: “Independent experts would decide how best to deploy the funds to both maximize impact and meet strategic investment objectives set by the government.”

“Independent experts” is another term for “technocrats” – bureaucrats chosen for their technical skill rather than by popular vote. They might be using sophisticated data, algorithms and economic formulae to determine “how best to deploy the funds,” but the question is, “best for whom?” It was central bank technocrats who plunged the economies of Greece and Italy into austerity after 2011, and unelected technocrats who put Detroit into bankruptcy in 2013.

In short, Hildebrand and co-authors are not talking about central banks giving up their ivory tower independence to work with legislators in coordinating fiscal and monetary policy. Rather, central bankers would be acquiring even more power, by giving themselves a new pot of free money that they could deploy as they saw fit in the service of “government objectives.”

The tendency to overreach was also evident in the Jackson Hole speech of BOE head Mark Carney, in which he said “we need to change the game.” The game changer he proposed was to break the power of the US dollar as global reserve currency. This would be done through the issuance of an international digital currency backed by multiple national currencies, on the model of Facebook’s “Libra.”

Multiple reserve currencies are not a bad idea, but if we’re following the Libra model, we’re talking about a new, single reserve currency that is merely “backed” by a basket of other currencies. The question then is who would issue this global currency, and who would set the rules for obtaining the reserves.

Carney suggested that the new currency might be “best provided by the public sector, perhaps through a network of central bank digital currencies.” This raises further questions. Are central banks really “public”? And who would be the issuer – the banker-controlled Bank for International Settlements, the bank of central banks in Switzerland? Or perhaps the International Monetary Fund, which Carney is in line to head?

The IMF already issues Special Drawing Rights to supplement global currency reserves, but they are merely “units of account” which must be exchanged for national currencies. Allowing the IMF to issue the global reserve currency outright would give unelected technocrats unprecedented power over nations and their money. The effect would be similar to the surrender by EU governments of control over their own currencies, making their central banks dependent on the European Central Bank for liquidity, with its disastrous consequences.

Time to End the “Independent” Fed?

A media event that provoked even more outrage against central bankers last month, however, was an August 27th op-ed in Bloomberg by William Dudley, former president of the New York Fed and a former partner at Goldman Sachs. Titled “The Fed Shouldn’t Enable Donald Trump,” it concluded:

There’s even an argument that the [presidential] election itself falls within the Fed’s purview. After all, Trump’s reelection arguably presents a threat to the U.S. and global economy, to the Fed’s independence and its ability to achieve its employment and inflation objectives. If the goal of monetary policy is to achieve the best long-term economic outcome, then Fed officials should consider how their decisions will affect the political outcome in 2020.

The Fed is so independent that, according to former Fed chair Alan Greenspan, it is answerable to no one. A chief argument for retaining the Fed’s independence is that it needs to remain a neutral arbiter, beyond politics and political influence; and Dudley’s op-ed clearly breached that rule. Critics called it an attempt to overthrow a sitting president, a treasonous would-be coup that justified ending the Fed altogether.

Perhaps, but central banks actually serve some useful functions. Better would be to nationalize the Fed, turning it into a true public utility, mandated to serve the interests of the economy and the voting public. Having the central bank and the federal government work together to coordinate fiscal and monetary policy is actually a good idea, so long as the process is transparent and public representatives have control over where the money is deployed. It’s our money, and we should be able to decide where it goes.

This article was first posted on Truthdig.org. Ellen Brown chairs the Public Banking Institute and has written thirteen books, including her latest, Banking on the People: Democratizing Money in the Digital Age.  She also co-hosts a radio program on PRN.FM called “It’s Our Money.” Her 300+ blog articles are posted at EllenBrown.com.