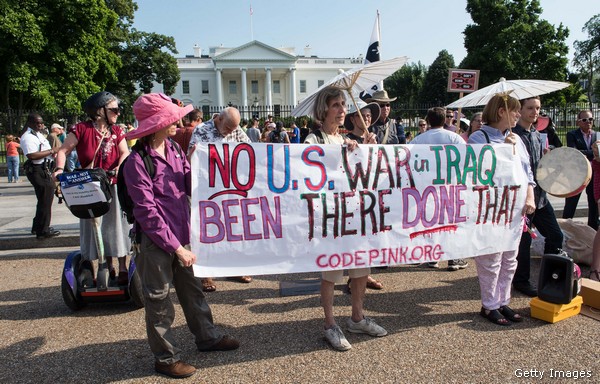 Poll: Fifty-five percent are against U.S. intervention of any kind, while only 20 percent support it.

WASHINGTON — Americans overwhelmingly oppose U.S. intervention in Iraq in the face of an advance by radical Sunni Islamists that routed the Iraqi army, a Reuters-IPSOS Poll showed on Thursday.

Fifty-five percent of those polled said they were against U.S. intervention of any kind, while only 20 percent supported it. There was little disparity in the overall response among Democrats, Republicans and independents.

Among those who supported some form of intervention, the most popular action was humanitarian aid for refugees from the conflict, and the second most popular was air strikes to support Iraqi government forces.

When presented with President Barack Obama’s position that there would be no U.S. military intervention unless the Shi’ite-led Iraqi government took steps toward power-sharing with Sunni and Kurdish leaders, most still opposed U.S. engagement.

Forty-five percent responded that the United States should not get involved in the conflict “no matter what,” 34 percent said Obama was setting appropriate conditions for engagement and 21 percent said U.S. involvement was needed to keep extremists from taking power.

The poll reflected predictable splits between Republicans and Democrats on ascribing blame for the Iraq crisis, in particular on the decision by Democrat Obama to pull all U.S. forces out of the country in 2011, eight years after they were sent in by Republish President George W. Bush.

The online poll of 1,019 Americans was carried out between June 17 and 19 and had a credibility interval of plus or minus 3.5 percentage points.