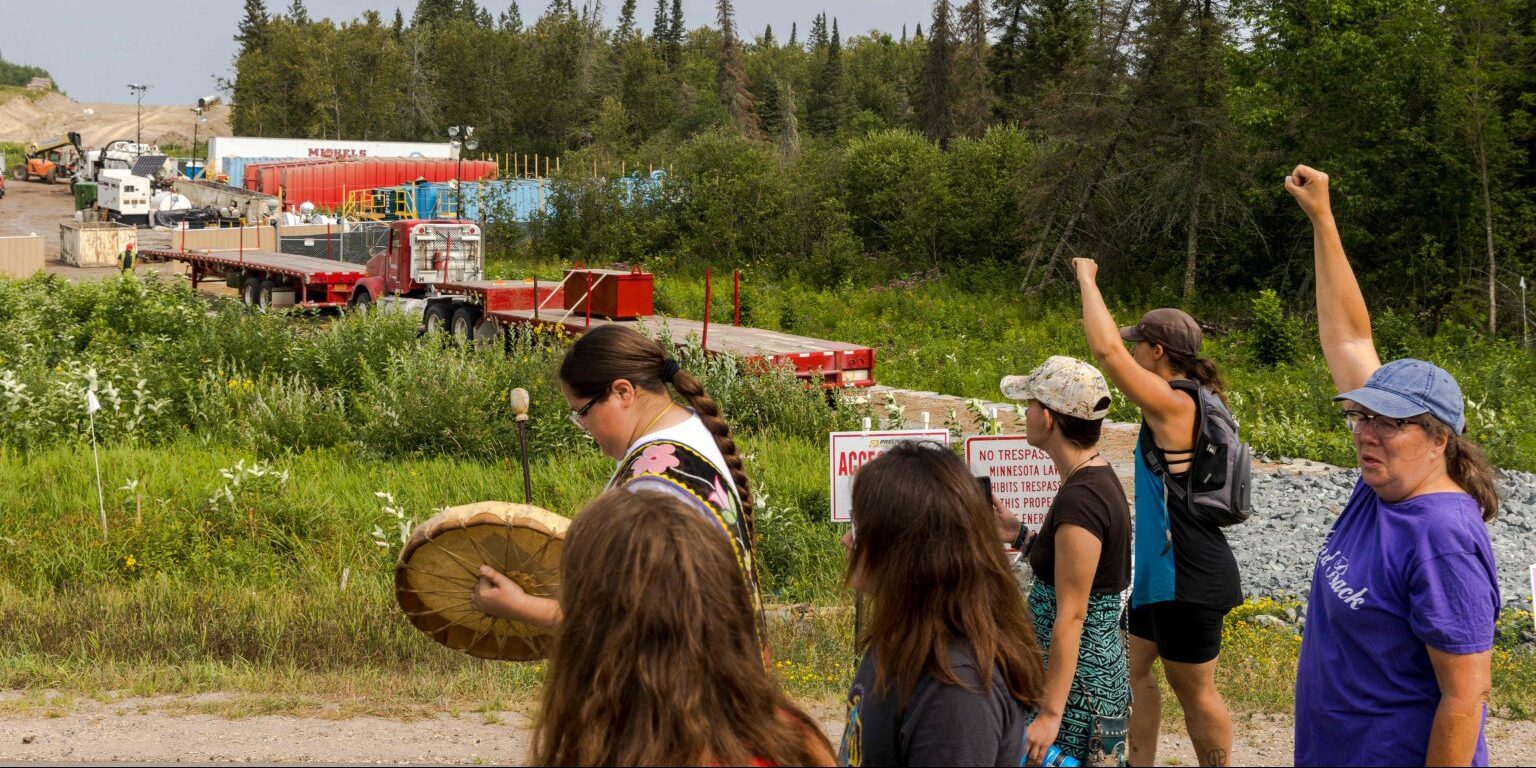 Above Photo: A group of Indigenous people and activists raise their fists as they pass Sections of the Enbridge Line 3 pipeline construction during the ‘Treaty People Walk for Water’ event near the La Salle Lake State Park in Solway, Minnesota on Aug. 7, 2021. Kerem Yucel / AFP / Getty Images.

Activists Say, ‘We Have To Stand Strong.’

A Tribe Has Filed A New Lawsuit Over The Rights Of Wild Rice. But The Options Are Running Out.

In the dense coniferous forests of northern Minnesota, they’ve shown up nearly every day to chain themselves to equipment and block traffic on roads, chanting “water is life.”

Not a week has passed this summer that activists haven’t used their bodies to stymie construction of Line 3, an oil pipeline that would deliver energy-intensive Canadian crude from the tar sands of Alberta to the Midwest. But those efforts don’t appear to be stopping the project, which has steamrolled forward since obtaining its final permits late last year.

All but the Minnesota section of Enbridge Energy’s 1,031-mile pipeline has been finished, and now the Canada-based energy giant says that that remaining work is 80 percent complete. The company said it’s on track to wrap up Line 3, including the 337 miles that run through Minnesota, by the end of the year.

Activists haven’t admitted defeat, at least not publicly, and press releases calling on people to join the frontline demonstrations continue to get widely disseminated among social media feeds and in email inboxes. “We have to be brave. We have to stand strong,” Tara Houska, a prominent Indigenous leader in the anti-pipeline movement, said in a July 30 press release. “We have to try. Actions, not words.”

And last Wednesday, in the latest attempt to derail the pipeline through legal action, the White Earth Band of Ojibwe tribe sued Minnesota’s Department of Natural Resources, arguing that when the agency granted Enbridge permission to divert nearly 5 billion gallons of water as part of Line 3’s construction work, it violated a 2018 tribal law that gives certain rights to wild rice plants.

But the lawsuit’s implications remain uncertain, and legal scholars said that tribal court cases affecting state law are quite rare. “Tribal court decisions are binding in the tribal nation they are decided in,” Kathryn Fort, the director of the Indian Law Clinic at Michigan State University’s College of Law, told Reuters. “Beyond that, it gets very situation specific.”

Once operational, the pipeline would pump 760,000 barrels of crude oil per day across 14 counties in northern Minnesota. And Indigenous activists say any spill from the pipeline could easily contaminate the hundreds of bodies of water it crosses, where local tribes fish, gather wild rice and perform cultural traditions.

Indigenous and environmental activists say the pipeline not only poses a grave risk to Minnesota’s environment but hinders the state’s transition to clean energy and violates the long-held treaty rights of Native tribes that depend on the land for their cultural identities and livelihood.

The new Line 3 would replace the original one built in the 1960s, something Enbridge says must be done to help prevent future spills while continuing to meet the country’s energy needs.

Both Minnesota and federal regulators have so far sided with Enbridge, granting the company the final permits to move forward with the Minnesota section of the pipeline last November. But the regulatory approvals have only further galvanized the thousands of protesters hell bent on stopping the pipeline, who call themselves “water protectors” and “land defenders.”

More than 700 demonstrators have been arrested this summer during acts of civil disobedience, according to the Pipeline Legal Action Network, an organization that coordinates legal support for Line 3 protesters. Those acts include incidents where protesters chained themselves to drills, climbed inside sections of pipe still waiting to be laid in the ground and blocked access to construction sites by hosting Indigenous ceremonies in the middle of roads used by Enbridge workers.

But as activists dug in their heels, they were met by equally increasing hostility from police, who say they’re simply carrying out the laws that have been put in place by the state’s elected officials and top regulators.

In June, protesters accused police of using a low-flying helicopter as a form of intimidation. In July, several demonstrators were sprayed with chemical irritants and shot with rubber bullets by law enforcement after the activists scaled a fence meant to keep people out of an Enbridge construction site. And last week, one demonstrator was reportedly knocked unconscious by police in Pennington County during a trespassing arrest, according to a social media post. The video on the social post showed the young activist being aggressively pulled to the ground by officers.

The aggressive tactics used by police against anti-pipeline protesters gained national attention during the 2016 Standing Rock protests, where vidoes spread on social media showed Indigenous and environmental activists being sprayed with fire hoses in below-freezing temperatures, attacked by police dogs and shot with rubber bullets. Some of the tactics being used by state law enforcement to police Line 3’s construction route, as well as actions by other northern Minnesota officials, could potentially violate protesters’ rights, said some legal scholars.

An incident in July prompted a Minnesota district judge to issue a temporary restraining order against Hubbard County, barring its sheriffs from “barricading, obstructing or otherwise interfering with access” to the driveway of a private property that activists have been using as a base of operations for their protest activities. In her order, the judge wrote that police blocking the driveway was “a substantial violation” of the property owner’s right to use and enjoy the property.

Still, it’s unclear what options remain for activists, whose efforts have merely slowed construction of Line 3 over the summer. Many had hoped the Biden administration would intervene, as it did with the Keystone XL pipeline in January. Those hopes were dashed after the Department of Justice filed a legal brief in late June that defended the project.