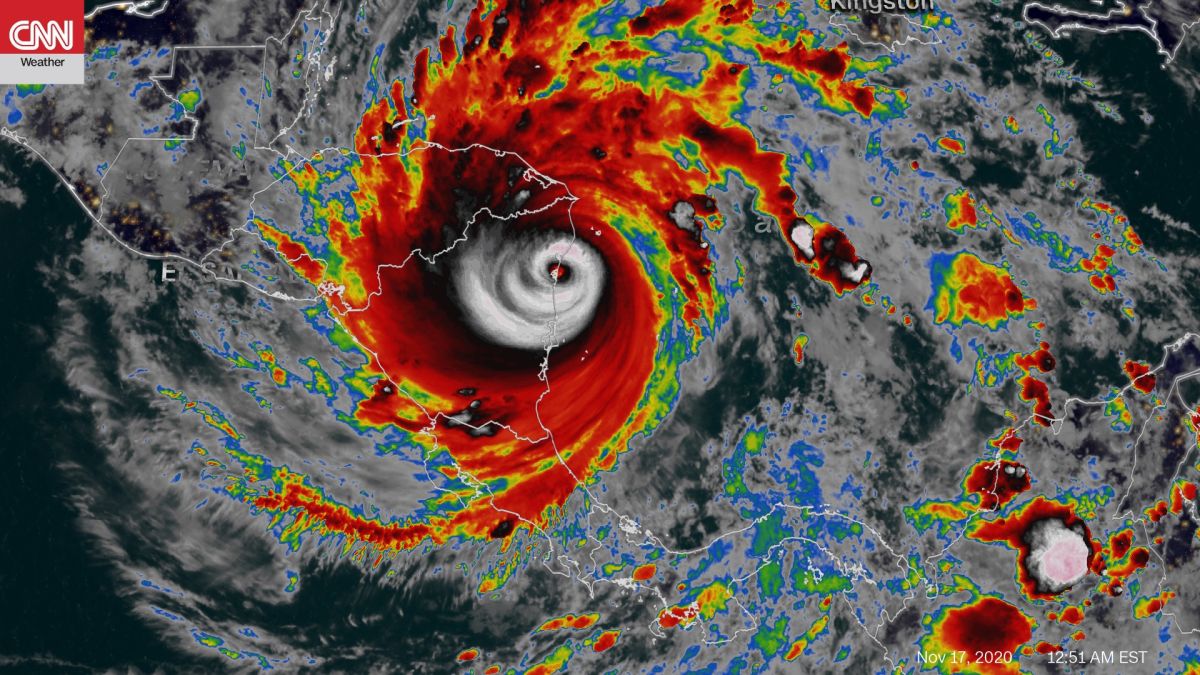 Above photo: Iota considered the strongest hurricane in history to hit Nicaragua.

At the moment, Central America is suffering from the acceleration of climate change fueled natural disasters. On the heels of the recent Hurricane Eta and a raging pandemic, Hurricane Iota has hit the region, predominantly impacting Indigenous, Afro-descendant, and black communities. The situation has been made worse by violent and corrupt governments supported by the United States.

Indigenous and Afro-descendant communities in Central America have long warned against climate change and environmental destruction caused by foreign-owned and operated extractivist projects. Some examples include hydroelectric dams, mining, African palm and petroleum extraction, among others. Land defenders and water protectors have been persecuted by repressive governments who have also used the pandemic to increase militarization and continue to receive arms and financial military aid from the United States. In Triunfo de la Cruz, Honduras, five Garifuna land defenders were kidnapped by men dressed as police officers on July 18. Further, Maya activists have been kidnapped, killed, or persecuted; others have been forced to flee and seek refuge elsewhere.

The US has historically intervened in Central America through their imperialist ambitions in accordance with the Monroe Doctrine, which views Latin America as their backyard. These include, but not limited to: occupying Nicaragua from 1912-1933, and installed the Somoza dictatorships; leading a coup against a democratically elected president in Guatemala, Jacobo Arbenz, in 1954 after passing necessary agrarian reforms that redistributed land; aiding and working with the Salvadoran, Honduran and Guatemalan dictatorships to commit massacres and genocide during the Central American Civil Wars; illegally equipping the counter-revolutionary Contras to create war with the Sandinistas’ who liberated their country from the Somoza dictatorships; the 1989 invasion of Panama; and the 2009 coup against Honduran President Manuel Zelaya.

These imperialist and interventionist polices by the US continue today, most recently through the Alliance for Prosperity under Obama which was strengthened under by Trump. The US sends millions in funding for militarization of the region, promotes neoliberalization and austerity, and furthers extractivism and US-monolopy control. The US also forced the Third Safe Country Agreements which deports refugees to Guatemala. Biden will only continue these policies and support corrupt and violent Central American governments such as those of Guatemala, Honduras, and El Salvador—governments which have not aided communities during the pandemic, nor during the chaos brought by Hurricanes Eta and Iota. For example, on November 18, Guatemalan congress rapidly voted to cut down funding for human rights, health and nutrition programs, and increase funding for their personal expenses and meals. Indigenous communities and ancestral authorities have denounced these actions.

The devastation of Hurricanes Eta and Iota have both short term and long term consequences. Crops, homes, infrastructure and roads have been destroyed, meaning people will not have access to food or shelter this upcoming year. Cases of Covid-19 are increasing due to lack of support and people are barely enduring starvation. The US continues to deport children and families, often times knowing that they have contracted coronavirus. We ask that folks support mutual aid efforts to support communities, especially indigenous, Afro-descendant, and black communities, who are in need.

Please refer to this comprehensive guide on how you can help with relief efforts: https://docs.google.com/document/d/1bkLadi5TWbzXbDPQGgqbQn308RewpZ9W6UfXdgxmlws/edit