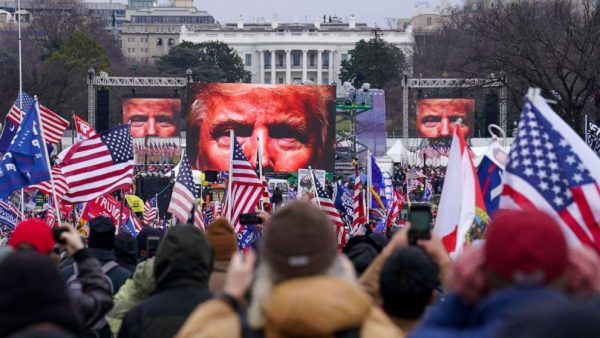 Above photo: Trump supporters at a rally in Washington D.C. AP Photo/John Minchillo.

NOTE: Popular Resistance does not view the events of January 6 as a coup attempt, but more of an event designed to disrupt the electoral vote count and rile up Trump’s base. This article outlines the involvement of police and state officials.  – MF

In the aftermath of the January 6 fascist coup attempt in Washington DC, new revelations show that the plot was prepared with the involvement of sections of the military, police and Republican Party. The danger has not passed. Trump remains president for 11 days and is using the White House as the nerve center for his efforts to remain in office. There is every indication that plans for a second putsch attempt on Inauguration Day—January 20—are now underway.

The minimal police presence at the Capitol building on Wednesday was not a mistake or oversight, as the corporate media has claimed, but part of a high-level conspiracy.

Before the rally, intelligence agencies refused to investigate the plans for the insurrection that participants and organizers were openly promoting online. The Wall Street Journal revealed yesterday that “the Federal Bureau of Investigation and an intelligence unit inside the Department of Homeland Security didn’t issue a threat assessment of the Jan. 6 pro-Trump protests,” even though such assessments are routinely made before nonviolent left-wing demonstrations and are used to prepare police crackdowns and identify participants.

The Washington Post also reported Friday that the Pentagon had issued orders disarming the Washington DC National Guard before Wednesday’s rally, delaying any armed response for several hours pending deployments from out of state:

The Pentagon placed tight limits on the DC National Guard ahead of pro-Trump protests this week… In memos issued Monday and Tuesday in response to a request from the DC mayor, the Pentagon prohibited the District’s guardsmen from receiving ammunition or riot gear, interacting with protesters unless necessary for self-defense, sharing equipment with local law enforcement, or using Guard surveillance and air assets without the defense secretary’s explicit sign-off, according to officials familiar with the orders.

Even then, the Pentagon refused to act for several hours on a request by Maryland Republican Governor Larry Hogan to deploy his state’s National Guard against the insurrectionists. On Wednesday night, Secretary of the Army Ryan McCarthy downplayed this delay, claiming there was “a little bit of confusion” after congressional leaders called Hogan from a bunker, begging him to deploy the guard and save their lives.

The Pentagon delayed granting Hogan’s request, which McCarthy attempted to justify by saying “a lot of questions were asked” and military officials needed time to “truly understand” and “work through” how to respond. “This has been incredibly fluid,” he added.

More information is also emerging about the police response at the Capitol building itself. While it was already known that police opened barriers to allow demonstrators inside the building, video published yesterday shows that inside the building, Capitol police stepped aside to allow rioters into an internal hallway where a group of congresspersons had been standing just seconds earlier.

In a telling interaction on CNN Friday, retired capitol policeman Theortis Jones said, “I think they allowed them to do what they did.” The complacent moderator failed to ask who gave the orders to stand back. The interview with the 37-year veteran was ended abruptly soon after he added, “They were a part of allowing these people to come up to the Capitol the way they did.”

The Democratic leadership is boasting that it is conducting an investigation into the death of the police officer who was killed in the riot. But this “investigation” will be conducted by the Capitol Police and the FBI—the very institutions that must themselves be subject to a thorough investigation for their role in this ongoing plot.

The Capitol Police’s self-investigation comes even as Democratic Congresswoman Zoe Lofgren reported that the chief of the Capitol Police lied to her by stating that the National Guard had been called up before January 6. The chief “was not truthful to me,” Lofgren told the press. “It was just not true. They had not been called.”

New details are also coming to light showing how close Wednesday’s riot came to ending in a massacre or mass kidnapping event. PBS Newshour correspondent Lisa Desjardins told NPR yesterday that she realized the danger she was in when she noticed police had abandoned their posts inside the Capitol building. She was barricaded in a room with several congressional representatives who held hands and prayed, worried that they were about to be killed.

An aide close to Vice President Mike Pence also told CNN yesterday that the Trump administration did not contact Pence or take any measures to ensure his safety. Pence was with his wife, daughter and brother in the Capitol building Wednesday as he presided over the electoral vote certification. CNN wrote:

Online, fascist militias are now preparing for an even larger event on Inauguration Day. Hampton Stall, the founder of MilitiaWatch and an expert on the US far-right, told the World Socialist Web Site:

There’s a lot of really cryptic chatter and overt discussions of violence around the January 6 event, but a lot of inauguration-related organizing is related to a few different dynamics that have been planned for at least a month’s time. One that stands out is the Million Militia March apparently organized for 20 January at the Capitol. Propaganda and event fliers have been circulating around militia chat groups.

Militia members are also making plans for protests at various state capitols in the days leading up to the inauguration. Stall added that while Wednesday’s demonstration in Washington DC was largely unarmed, this may change on January 20:

There are also multiple state capital events organized for the 17th, 18, 19th and 20th. Fliers for these events have been quite mixed as far as indications as to the specific ideological tendencies of those organizing, whether it be ‘2A’ activism, overt militia organizing, Boogaloo, or something else entirely. The one commonality is that all are expressly right-wing in nature and often point to a militant or armed gathering.

Exactly one year before the date of the scheduled inauguration, on January 20, 2020, the largest armed demonstration in US history took place in Richmond, Virginia involving roughly 10,000 fascists. In December, Trump’s fascist adviser Stephen Miller said, “The only date in the Constitution is January 20,” adding that this was the “deadline” for action to protect Trump’s presidency.