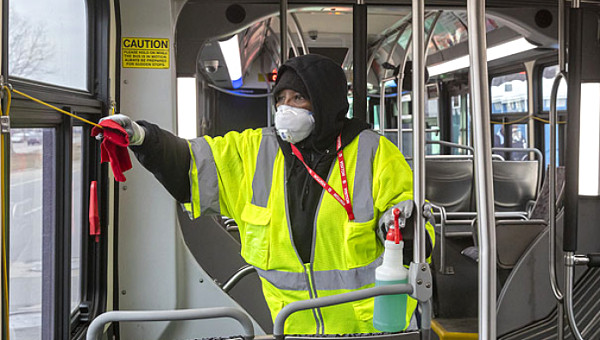 Above Photo: From Labornotes.org A city worker is cleaning at the end of the line. Photo: Jim West / jimwestphoto.com.

Michigan – Detroit bus drivers collectively declared Tuesday morning that they weren’t going to work without safety precautions. Bus service was canceled throughout the city because of “the driver shortage,” as city officials put it.

The drivers’ union backed them up and their brief work stoppage, less than 24 hours, won all their demands. Fares will not be collected for the duration of the coronavirus crisis.

Amalgamated Transit Union Local 26 President Glenn Tolbert spoke to Labor Notes as he drove around the city this morning checking to see whether management was living up to its commitments.

“The riders are going in and out the back doors,” he said. “There is very little interacting with the drivers.”

Tolbert said one trigger for the stoppage was Monday’s closure of all state restaurants, leaving drivers with no place to use bathrooms or wash their hands.

Drivers gathered at dawn yesterday at the city’s two big bus terminals. Vice President Willie Mitchell said, “Some of our drivers were not comfortable with the cleanliness of the coaches so they didn’t want to go to work until things were cleaner and better.

“They had been discussing it, they just decided they weren’t going to work. They called us and asked us to stand by them, and that’s what we do.”

Mayor Mike Duggan visited both terminals and listened to the drivers’ complaints. The city agreed to make sure restrooms are available, using portable toilets with hand sanitizers if necessary (there is already pushback on the probable uncleanliness of such toilets).

More cleaning staff will be hired and cleaning protocols are specific: “Use of a new rag for each bus, with the sanitizing of high touch points with a 10/1 ratio disinfectant.” Drivers will get gloves and disinfectant wipes at the beginning of each shift, and masks “upon request whenever available.”

“It caught the ridership off-guard,” Tolbert apologized, “but the strike was for them.”

Told his local was setting an example for bus drivers around the country, Tolbert said, “I’ve been getting texts from as far away as Washington, D.C.”