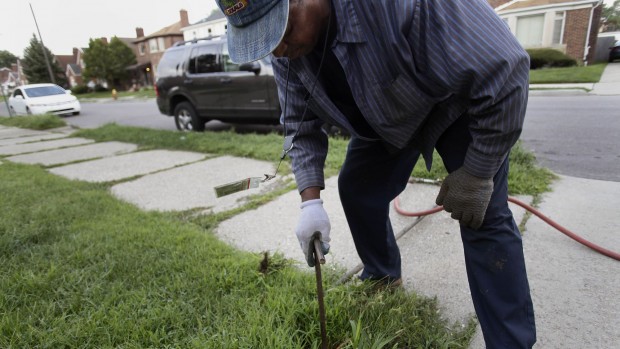 Detroit Is Starting To Shut Off People’s Water Again

Above: Shutting off water in Detroit by Getty Images

The City of Detroit began shutting off water access to residents behind on payments Tuesday, with thousands at risk of losing access.

That figure tops the estimated 41,000 individuals who Food and Water Watch (FWW), an advocacy group, says lacked any water as of January (there is likely overlap between the groups).

The city started sending out shut-off warnings May 11. According to theFree Press, Mayor Mike Duggan is proceeding with the shutoff orders over the wishes of city council members, who voted on May 12 to freeze the shutoff until an assistance plan to help affected residents was enacted.

FWW’s Lynna Kaucheck says Duggan tried implementing one last year that gave discounts to qualified residents, but that program proved too expensive for most residents.

“They might be able to afford it for month or two, and then they would default,” she told Fusion. “We need an affordability program based on ability to pay.”

This type of plan would tier water pricing by people’s ability to pay, though it would cause water prices for other users to increase.

Such a plan is now being considered by the city council, which established an affordability task force that met for the first time on Friday.

Last year, the United Nations warned the city that the shutoffs were violations of residents’ human rights, and called on the city to stop them and reconnect their houses.

“None of those things happened,” Kauchek said.

Detroit residents are not the only ones facing water shut-offs: In March, Baltimore residents began receiving turn-off notices; according to theBaltimore Sun, 25,000 water customers are delinquent.

“We want to make sure all of our citizens pay their fair share,” Baltimore public works director Rudy Chow told the paper.