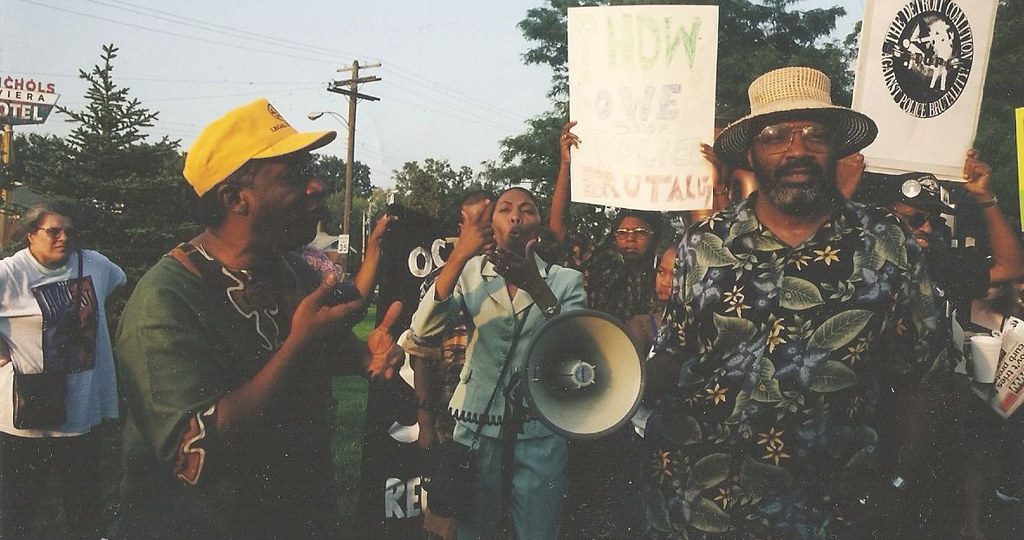 Over 20 groups have signed on to a call for federal Justice Department intervention to address law-enforcement brutality and impunity.

A press conference held by numerous community organizations in Detroit on May 19 demanded that the administration of President Joe Biden’s Department of Justice conduct an investigation into allegations of brutality and institutional racism by the police in the city of Detroit.

This media event was held on the steps of the First Unitarian Universalist Church located in the Midtown District.

Leading activists and Civil Rights attorneys were there to explain the legal and political reasoning behind the memorandum. Since 2020, millions of people have demonstrated across the United States and internationally in response to the police execution of George Floyd in Minneapolis along with others killed by police. Attys. Nancy A. Parker, Jeff Edison and Mark Fancher served as spokespersons before members of the press.

The current administration of President Biden has pledged to increase funding for the police while proving incapable of passing legislation such as the George Floyd Justice in Policing Act which would have placed federal guidelines to govern the conduct and accountability of law-enforcement agencies in the U.S. This administration’s lack of action related to police brutality has contributed to the alienation of many African Americans from the president.

Detroit has a long and troubled history of police misconduct. The July 1967 Rebellion was sparked by misconduct against the African American community by the police.

The press conference on May 19, the 97th birthday of Malcolm X (Hajj Malik El Shabazz, 1925-1965), was held under the banner of the Coalition for Police Transparency and Accountability (CPTA). This alliance formed in the aftermath of the police killing of Hakim Littleton (20) during July 2022 on the northwest side of Detroit, encompasses a broad spectrum of community groups.

CPTA begins the memorandum by stating that: “The Coalition for Police Transparency and Accountability (CPTA) requests a federal investigation of a pattern of killings and excessive force by the Detroit Police Department (DPD) and an institutional culture within the department that promotes violence and racial discrimination within the Department and against members of the community. The mission of CPTA is to expose police misconduct in all its forms and thereby demand police transparency and accountability as well as garner community support for this effort. The Coalition was formed after the killing of Hakim Littleton in July 2020 by the Detroit Police Department officers. CPTA’s members include concerned community members and organizations that demand an independent investigation into this killing as well as other instances of police misconduct in all its forms. The CPTA is committed to raising community awareness about police brutality, holding the DPD accountable for its actions, and demanding genuine transparency from the department.”

During the administration of former Mayor Roman Gribbs (1969-1973), relations between the African American community further deteriorated after the 1967 Rebellion. Mayor Jerome Cavanaugh (1961-1969) was in office during the Rebellion and its aftermath. A series of violent incidents involving the police such as the March 1969 gun battle between members of the Republic of New Africa and law-enforcement at New Bethel Baptist Church resulted in the shooting of two white police officers, leaving one dead. The response of the police was to fire hundreds of rounds of bullets into the church as RNA members and supporters were leaving a conference to commemorate its first anniversary.

Although the police arrested approximately 150 people still inside the church, then Recorder’s Court Judge George Crockett, Jr., went to the jail where the attendees and others were being held and ordered their release based upon a lack of evidence of their participation in the killing and wounding of the officers. Three people were investigated as suspects in the shootings and killing of the two officers. However, no one was ever convicted in the incident. Between 1969-1973, the Detroit police under the Cavanaugh and Gribbs administrations continued to engage in brutal and deadly activity.

In 1971, a police decoy unit was formed purportedly to address the rise in violent crimes in the city. The Stop the Robberies Enjoy Safe Streets (STRESS) units were responsible for the deaths of over 30 people most of whom were African Americans. A citywide mobilization of community residents organized mass demonstrations demanding the abolition of STRESS. Eventually, at least three youth took up arms against STRESS in late 1972 and early 1973 when several police officers were shot, with at least one being fatal.

This escalation in tensions during 1971-73, set the stage for the election of the first African American Mayor Coleman A. Young (1974-1993). The Young administration implemented reforms utilizing affirmative action in order to diversify the police force. However, towards the end of his administration in November 1992, Malice Green, a 35-year-old African American, was brutally beaten to death by two white police officers on the westside. One of the officers charged and convicted in the killing of Green had been a member of STRESS during the early 1970s. Both officers spent several years in prison where they were eventually released in 1998 on appeal.

After Young left office the administration of his successor, Dennis Archer, became notorious for the sharp increase in police killings of civilians. By 1996, the Detroit Coalition Against Police Brutality was formed which fought for accountability in the unwarranted killings. Eventually in 2000, the U.S. Department of Justice under President Bill Clinton, launched a federal investigation into the use of lethal force and the deplorable conditions existing in the jails. After three years, two federal consent judgments were levelled against the Detroit police, a series of monitors were contracted to oversee the reform process which lasted from 2003 until it was discharged during the controversial emergency management and bankruptcy of the City of Detroit.

By citing a number of police killing of individuals such as Caso Jackson (25) in 2015; Bradley Carey, (54) in 2016; Raynard Burton, (19) in 2017; to only name a few, the CPTA makes a compelling case for a review by the Civil Rights Division of the Justice Department. The refusal of the Michigan Attorney General’s office under Dana Nessel to even conduct an investigation into the police killing of Hakim Littleton in 2020, where the law-enforcement officers responsible for his death were exonerated by Wayne County Prosecutor Kym Worthy, furthers the argument for federal intervention.

During the wave of outrage in the aftermath of the police killing of George Floyd in Minneapolis on May 25, 2020, thousands of people in Detroit took to the streets in righteous indignation mirroring developments across the country and internationally. The former police department Chief James Craig, who had served as head of law-enforcement and deputy mayor, ordered the officers to attack protesters violently. Approximately 400 people were arrested without cause while many suffered severe injuries including wounds inflicted by rubber bullets, clubs, sound grenades and other tactical crowd control weapons.

Craig and Duggan both refused to accept any responsibility for the abuse and injuries to people exercising their rights to assemble. Eventually Craig did resign in 2021 after victims of the police filed lawsuits in U.S. District Court which was instrumental in gaining a temporary restraining order against the DPD. Members of the leading antiracist organization, Detroit Will Breathe, are continuing to be harassed by the city government and the courts.

The CPTA memorandum states clearly that the new leadership of Chief James White has proven to be no better than Craig. The civil litigation filed by victims of brutality remain unresolved due to the legal tactics of obstructionism utilized by the Duggan administration.

In conclusion the memorandum says of the current situation in 2022: “CPTA has scrupulously directed its concerns and requests to government actors and agencies in Michigan charged with addressing the issues regarding policing that the coalition has raised. Nevertheless, there has been no meaningful, effective response, leaving CPTA with the sole remaining option of requesting federal intervention. Thus, it is respectfully requested that the Department of Justice officials investigate not only the ongoing police killings, escalating violence and racist discrimination perpetrated by and within the Detroit Police Department, but also the institutional culture that inspires and sustains such misconduct.”