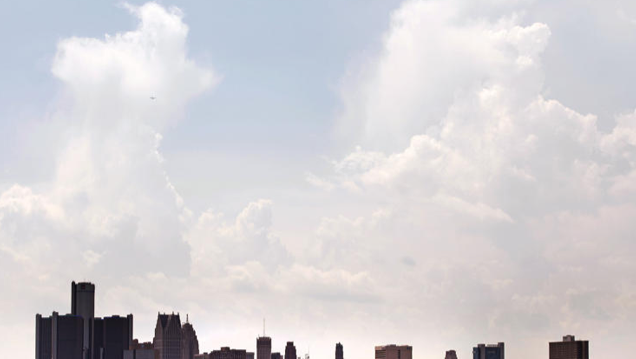 The city of Detroit’s skyline is shown on July 18, 2013 in Michigan (AFP Photo/Bill Pugliano)

Geneva (AFP) – UN rights experts on Wednesday slammed struggling US city Detroit for violating the basic human rights of its citizens by disconnecting thousands of people from water services over unpaid bills.

Cash-strapped Detroit, which last July became the largest US city to ever file for bankruptcy protection, has recently begun disconnecting water services on a large scale, for all households that have not paid bills for two months, the three experts said in a statement.

The birthplace of the US auto industry has accelerated the process since early June, with around 3,000 customers cut off each week, and some 30,000 households expected to be disconnected from water services over the next few months, they said.

“Disconnection of water services because of failure to pay due to lack of means constitutes a violation of the human right to water and other international human rights,” they insisted.

“The households which suffered unjustified disconnections must be immediately reconnected,” they said.

While disconnecting people who are able to pay but choose not to can be justified, the experts stressed that in a city like Detroit, with its sky-high poverty and unemployment rate, the relatively expensive cost of water is simply unaffordable for a significant portion of the population.

“When there is genuine inability to pay, human rights simply forbids disconnections,” said Catarina de Albuquerque, an expert on the right to water and sanitation.

She said she had previously called on the US government to adopt federal minimum standards on the affordability for water and sanitation, and urged Washington to take action to help protect families living in poverty against disconnections.

Leilani Farha, the expert on the right to adequate housing, meanwhile cautioned that disconnections were having devastating consequences, with social services removing children from their homes after the water was cut off since their housing situation was no longer considered adequate.

And “if these water disconnections disproportionately affect African Americans they may be discriminatory, in violation of treaties the United States has ratified,” she warned.