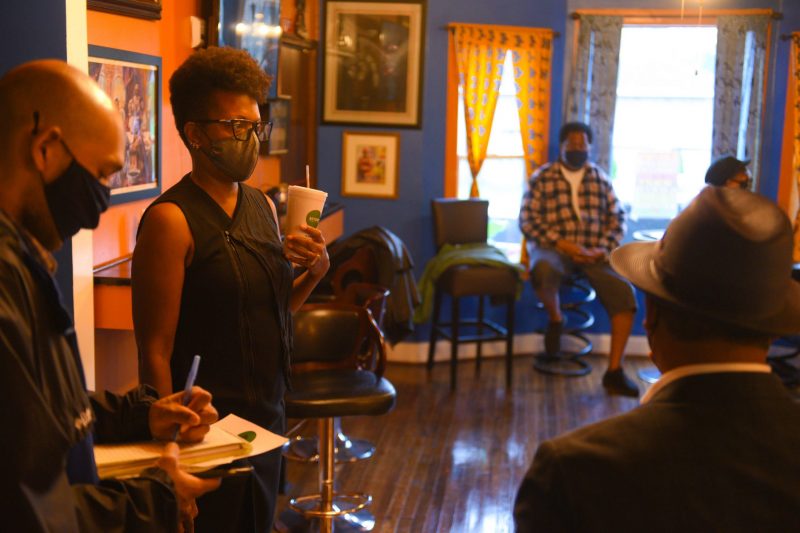 Above Photo: Lauren Hood and the chair of the Democratic Black Caucus, Keith Williams, discuss their community event in October about Proposal R. Hernz Laguerre,Jr., The Detroit News.

Detroit voters favored launching a reparations commission Tuesday, and a proposal to decriminalize psychedelic plants passed by a wide margin.

Another, Proposal S, failed with 53.9% voting no to amending a section of the city charter to allow voters to push ordinances that include appropriating money.

Another ballot proposal to amend the city charter to allow for citizen-driven ballot initiatives tied to city spending, Proposal S found no support among nearly 54% of voters, while 46% voted yes.

Proposal R asked whether Michigan’s largest city should form a committee to consider reparations for residents, 77% of whom are Black.

“Timing is everything,” said Keith Williams, chairman of Michigan Democratic Party Black Caucus. “It’s the teamwork with (council president pro tem) Mary Sheffield … We teamed together and we had a groundswell of support from different organizations to bring this to fruition. The most important thing is it’s time for reconciliation. It’s time to heal and let’s move the city forward.”

The group will recommend housing and economic development programs “that address historical discrimination against the Black community in Detroit,” according to the ballot language.

The proposal does not require steps beyond the group’s formation, including members and timelines for a decision, or mandate how any guidance would be enacted.

It was spearheaded by Sheffield after talks with activists who pushed for the measure amid nationwide calls to compensate descendants of slaves.

Durrel Douglas, 35, said Tuesday he voted in favor of Proposal R to allow the city to explore reparations. Douglas moved from Houston to Detroit last year.

“I think cities like Detroit have to lead the nation in showing that these things are possible and the methods that other cities, other states and eventually the nation can move when it comes to doing what should have been done a long time ago around reparations,” he said.

Other communities across the country have started considering similar moves amid racial reckonings following the Black Lives Matter movement, the death in 2020 of George Floyd, the presidential election and the pandemic’s impact on minorities.

Last spring, the Democratic-controlled U.S. House Judiciary Committee passed a successor to legislation introduced by the late-John Conyers, the longest-serving African-American in Congress, to address reparations.

The City Council now will start a framework to select a task force, Sheffield said. She and supporters say the move could lead to short- and long-term recommendations, such as housing grants, from a group that includes residents as well as professionals.

Paulette Watson, 70, said she voted to decriminalize psychedelic plants and establish a reparations task force but voted against amending the charter.

“I wasn’t sure on reparations, but after they said they just wanted to form a committee, I thought, that’s not going to hurt anything,” said Watson, who voted by absentee ballot. “Citizens can’t pick the budget for issues.”

One of the groups involved in backing Proposal R has also pushed for Proposal S, which sought to amend a section of Detroit’s City Charter to allow voters to push ordinances that include appropriating money.

Those powers currently do not extend to the budget under the city charter.

The nonprofit Citizens Research Council of Michigan has said the move “could present challenges for the operation of government. It is not clear how such citizen-initiated appropriations would fit with current laws as they relate to the timing of elections, the budget and appropriations processes, the prioritization of city spending, and the powers granted to certain branches of government.”

Voter-initiated Proposal Easked Detroiters if they believe the personal possession and therapeutic use of entheogenic plants like psilocybin mushrooms or peyote should be decriminalized to the fullest extent permitted under Michigan law.

The measure would not legalize the use and possession of psychedelics but it would make it the city’s lowest law-enforcement priority.

Proposal E goes to Detroit voters after Democratic state Sens. Jeff Irwin of Ann Arbor and Adam Hollier of Detroit last month introduced a bill to decriminalize two popular psychedelic drugs in a bid to make them available for therapeutic use.

Under Senate Bill 631, possession and use of psilocybin, commonly known as magic mushrooms, and mescaline, found in cacti that is comparable to LSD, would be “exempt from criminal prosecution in certain circumstances.”

The group Detroit Decriminalize Nature helped shape the ballot initiative. Moudou Baqui, a member of the group that has worked to educate voters, said there are similar Decriminalize Nature groups around the state, including in mid-Michigan, Ann Arbor and Grand Rapids.

Deputy Mayor Conrad Mallett Jr. told The Detroit News the Mayor’s Office does not have a position on Proposals E or Proposal S. He said the City Council goes through a deliberative budget-setting process to maintain fiscal responsibility.

Catherine Phillips, a retiree of the city who served with the Detroit Water and Sewerage Department for 30 years, said she voted yes on all three proposals.

“I don’t know a doggone thing about a mushroom. I didn’t even know these were still around since I was in high school,” said Phillips, 64. “I think if we legalize drugs, it’s for a better community as a whole. Alcohol kills more people than weed or a mushroom, so I think it’ll be better if it was on its way to regulation.”