Note: Grassroots Economic Organizing decided to kick-off co-op month with Tim Huet’s seminal article about why there is no more important social change work you can do than the developing the cooperative movement. We decided to join them because cooperatives are an important aspect of democratizing the economy and creating a new economy that serves the people, not just the wealthy.  KZ

A Manifesto for a Life-Changing Conclusion

A Long and Logical Road

Premise 1: Regulation and reform will not keep capitalism from destroying our environment and creating disastrous social cleavages; fundamental change is needed.

I could go on for a quite a while regarding why capitalism inevitably leads to ecological and social ruin — and there was a time (during my student days) when I did go on at length about the pathology and prognosis. But I came to the conclusion that it was largely a waste of time. Because—

Premise 2: There’s no point convincing people of the prevailing system’s intrinsic and inevitable failings if you can’t offer hope of anything better.

I became very proficient at persuading people regarding the downsides and doom. But that simply led to the question, “What can you offer better?” And, believe me, an exploration of the theoretical promise of anarcho-syndicalism or your-ideal(ist)-prescription-of-choice won’t get you very far with most people. Because—

Premise 3: The overwhelming majority of people cannot be convinced with theoretical arguments, but require demonstrative proof.

Premise 4: You can’t simply wait for capitalism to collapse (or work to “tear down capitalism”), with the expectation that “after the collapse” people will “get revolutionary consciousness” and be receptive to your arguments about building a truly democratic society and economy.

History indicates clearly that, in the wake of economic collapse, people are more likely to listen to fascist/totalitarian appeals to their fears and hunger than they are to elaborate proposals for building a more democratic economy and society. We cannot simply await the apocalypse, cheering or working for capitalism’s collapse; we need to build the democratic future now. We at least need to build a working example of a democratic future economy and society, an inspiring example people can turn to as their eyes are opened wide by capitalism’s escalating crises and increasingly frequent crashes. Moreover—

Premise 5: Efforts to tear down the system or protest its injustices do not develop the constructive skills and habits of mind that a democratic economy and society require.

There is plenty about the current regime that inspires and even requires protest. But we get stuck in an oppositional, critical, reactive mentality if all we do is protest. By endeavoring to build working models of economic democracy, we also build the constructive skills and thinking that will be needed to operate the equitable “post-capitalist” society we envision.

Premise 6: You cannot achieve true democracy without economic democracy: democracy in the workplace. 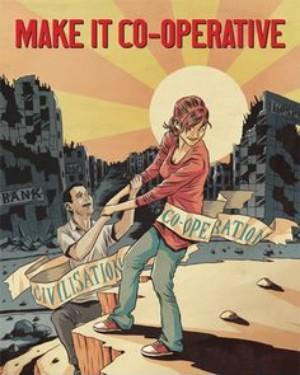 You cannot say a society is truly democratic if its adults spend the majority of their waking hours in undemocratic workplaces and do not enjoy control over the basic elements of their lives (no control over their jobs ultimately means no security regarding their homes, healthcare, time, education, etc.). And the undemocratic nature of work for most adults has effects beyond the workplace and outside working hours. Autocratic models of relating in the workplace carryover into the family, larger community, and political realm. Conversely, I believe that members of worker cooperatives learn democratic skills and ways of interacting with each other—and the confidence that comes from taking control over your life—that have benefits for their families and larger communities, and can carryover into the political realm.

Indeed, I don’t think there is much hope for achieving even limited political democracy (what I refer to as “periodic democracy”) if you don’t have the everyday democracy of workplace democracy. It is a dirty secret that no liberal and few progressives wish to acknowledge: an electorate without everyday democratic experience/perspective/skills, and the security that comes from controlling one’s fate, is too easily manipulated by fear-mongers, prejudice-peddlers, and other rightist political operators. And yet so much progressive energy goes towards state, national, and international campaigns when we lack communities/bases of everyday democracy from which to build—when we have failed to build up everyday democracy from the grassroots, community by community.

So, the more obvious meaning of my seventh premise is that “we wont have achieved true democracy until we have workplace democracy;” but the more important meaning, the one that drives my action agenda, is “we need to build cooperatives as bases for a democracy movement.”

Democracy demonstration projects: As stated above, it is critical to build working examples of economic democracy that people can see and experience. From that point of view, every worker cooperative is a democracy demonstration project beyond simply being a business. In addition to producing bread, bicycles, etc., we produce hope and inspiration.

As importantly, we can provide an example and experience of community, which people hunger for in our disconnected society. I see the proof and power of this on a regular basis through the cooperative bakeries with which I’m mostly directly associated. Customers come in not simply for the great bread, but also for the sustenance of community. They sense the community at our cooperatives and want to be part of that.

It follows from this that every interaction with the general public is imbued with social change importance and opportunity. Conversely, it is a wasted opportunity (or worse) if we fail to show care or concern, if we fail to serve our communities any better than “wage slaves” under the watch of a boss.

Worker cooperatives have to work for everyone, not just idealists or activists: Earlier I referenced the promise of worker cooperatives to provide activists with “right livelihood,” the opportunity to live out and further their values; however, I feel strongly that worker cooperatives have to be attractive workplaces for people other than avowed activists. If we only build businesses-communities that work for idealists (“Aren’t you dedicated enough to work for minimum wage?!), we’ve hardly proven anything regarding the viability of economic democracy. Personally, I find it most satisfying when we hire people who’ve never heard of cooperatives and have never been active in their communities. It is one of the greatest pleasures of my work to see such people blossom, to grow in confidence and skills —and then perhaps lend their newly-developed skills to broader community endeavors.

Laboratories for democracy: The sad fact is that humanity has only the most rudimentary knowledge, vocabulary, technology, etc. for how to relate to each other and work together as equals. An important part of our function as cooperators and agents for social change is to be very conscious regarding our experiments in democracy and community. We are developing knowledge (regarding conflict resolution, communication, collective decision-making) very much needed not simply for the effective functioning of democratic workplaces, but for the establishment of relations based on equality and respect throughout society.

Worker cooperatives can generate capital for social causes, but shouldn’t give it all away: During the 1970s ferment of U.S. worker cooperative development (I’m referencing such things as the “food conspiracies” that blossomed in the Upper Midwest, Bay Area, etc.), there was a prevalent “hippie ethic”: making money was evil and paying attention to business was “uptight” and “bourgeois”. Some movement maturation and natural selection took place. The cooperatives that survived and thrived were generally ones that realized paying attention to business allowed you to better serving your community, including generating resources for community betterment.

Worker cooperatives have to work for everyone, not just idealists or activists

Likewise, valuing our inherent social change role should inform the relationship of worker cooperatives to the larger social justice movements. While social change work is my motivation for being involved with cooperatives, it does not follow that I believe cooperatives should serve, above all, as platforms or purses for political causes. Worker cooperatives do have resources and a great deal of visibility that we can lend to various causes. However, I believe we should do this only in a focused and judicious way (for instance, a grocery cooperative focusing its support in the areas of organics and farm workers rights, or a taxi cooperative focusing its efforts on transportation policy). We need to be cautious not to tear ourselves apart or alienate our customer bases by involving ourselves in every hot-button-issue-of-the-day; to do this would waste our social capital, since by forwarding the worker cooperative movement we may contribute more to the social change movement in the long-run. This does not mean that I think worker cooperatives should stand apart from other social change movements, as I will explain in the concluding section.

As Important, Not More Important—And Not Sufficient

I’m aware that my opening claim of TINMISCWYCDTCD would strike some activists in other social change movements as a bit grandiose and perhaps even offensive (“How can he put that on the same level as the urgent frontline work we’re doing?!). I’m hoping that this essay might reach and provoke such activists to see cooperatives as an integral to any movement for justice, peace, and sustainability. That you’re not accomplishing much to save the environment if you don’t address the economic engine that drives consumption and belches out pollution. That, if you want peace and democracy overseas, you should care fiercely about establishing economic as well as political democracy domestically; that developing locally-rooted sustainable economic democracy is critical to countering the forces of global expansionism and military adventure. 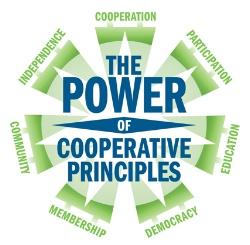 Yet, I do not claim that cooperative development is more important than all other forms of social change work. There are various forms of social change work that are just as important, and need to be carried out simultaneously if not in conjunction. I don’t think cooperative development in itself will ever solve all the world’s problems. Nor do I think worker cooperatives can or should stand apart from other social change movements; for instance, we need to battle the many injustices (racism, sexism, etc.) that pervade our society and will not be barred from our doors by any declaration that “we’re all equal here at our cooperative”. In particular, I think worker cooperators need to think of ourselves and act as part of the larger labor movement, not leaving behind other workers because “we got ours”.

And I can fully understand someone dedicating herself or himself to another form of social change work and never having anything to do with cooperatives. Those who seek to be agents of social change should choose the area(s) in which they can best contribute and find the most fulfillment. For myself, I have found cooperative development to be very fulfilling as well as meaningful, and I hope to convince many others to join in.