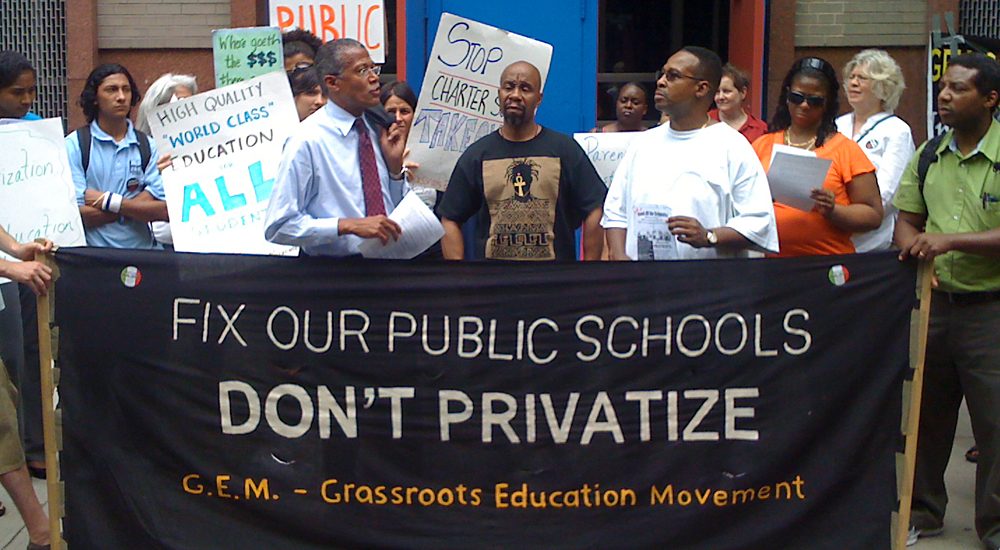 DeVos And Charter School Movement Use Pandemic To Advance Agenda

The country might be in lockdown, but the privatization movement steams ahead.

COVID-19 has shuttered public schools across the nation, state governments are threatening to slash education budgets due to the economic collapse caused by the outbreak, and emergency aid provided by the federal government is far short of what is needed, according to a broad coalition of education groups. But the charter school industry may benefit from its unique status to seek public funding from multiple sources and expand these schools into many more communities traumatized by the pandemic and financial fallout.

As school districts reported problems converting classroom learning into online instruction delivered to students’ homes, often due to lack of funding for internet-capable devices and Wi-Fi hotspots, charter school proponents are jumping in to take advantage of emergency aid.

Charter operators rolled out new marketing campaigns to lure families to enroll in their schools. And in national and local news outlets, advocates for charters, vouchers, and other forms of “school choice” helped forge a new media narrative about how the shuttering of the nation’s schools was an opportunity for parents and their children to leave public schools.

Teachers in Los Angeles and Oakland urged their districts to stop charter school expansions and co-locations, which they believe worsen the trauma that children in their communities are experiencing due to the virus. But the Trump administration and U.S. Secretary of Education Betsy DeVos have shown no signs of easing up their campaigns to further privatize public schools.

“This is an opportunity,” said DeVos in an interview with right-wing radio talk show host Glenn Beck, “to collectively look very seriously at the fact that K-12 education for too long has been very static and very stuck in one method of delivering and making instruction available.”

A Gift from DeVos

On March 27, one of DeVos’s first reactions to the pandemic was to urge Congress to provide “microgrants” to help “the most disadvantaged students,” an idea that struck knowledgeable education policy observers—including retired teacher Peter Greene and National Education Association president Lily Eskelsen Garcia—as being in sync with her longtime advocacy for school vouchers. Somehow the mass shuttering of the nation’s schools convinced her “that necessity has never been more evident.”

A week and a half later, DeVos unveiled an investment of more than $200 million in grants from the federal government to help 13 charter school management companies expand.

It’s not at all clear the new grants come with new measures to oversee how charters spend the money. If they don’t, that would be a big mistake. A December 2019 report from the Network for Public Education (NPE) found that since the charter grant program’s inception, approximately $1.17 billion has gone to schools that either never opened or that opened and have since shut down. The failure rate of charter startups funded by the education department’s Charter School Program is 37 percent.

An earlier NPE report, which I co-authored, also found that many charter management organizations that have received federal grants are “beset with problems including conflicts of interest and profiteering.” Some of the organizations receiving this new round of federal funding have these same flaws.

For instance, the largest grant, $72 million over five years, is going to the IDEA charter chain, which in January 2020 was publicly humiliated by reports in the Houston Chronicle for its plan to use $2 million in taxpayer money to buy a luxury private jet. The Chronicle also revealed the company had spent hundreds of thousands of dollars annually on tickets and luxury box seats at San Antonio Spurs NBA games—over $400,000 in the most recent year.

Another recent report in the Texas Monitor revealed IDEA executives spent over $800,000 on luxury travel between 2017 and 2019, including private jets and limos. In one of these larks, IDEA CEO Tom Torkelson took a private jet to Tampa to meet with DeVos “to discuss ‘education philanthropy,’” the Texas Monitor reports. Torkelson recently resigned.

Another charter chain benefitting from DeVos’s generosity is Mater Academy, which received the second-largest grant of $57.1 million. Mater Academy is affiliated with for-profit education company Academica.

As NPE executive director Carol Burris explained in the Washington Post, three schools operated by Academica in Florida, including two in the Mater chain, were the subjects of a government investigation that found “related party transactions” between Academica and “a real estate company that leased both buildings and security services to the schools.” The companies were also connected to founders of both the Mater Academies and Academica.

An extensive 2016 investigation of Academica’s business practices conducted by privatization watchdog group In the Public Interest found that, in addition to providing management services, Academica also leased facilities to many of its schools and tended to charge significantly higher rents than what non-Academica charters were made to pay.

Each of these charter school operations deserves close scrutiny of their business practices, but DeVos has chosen to reward them with over $129 million in federal funding at a time when public school districts are in crisis and likely face severe budget cuts.

When Congress and the Trump administration announced plans in late March to send $13.5 billion in emergency aid to public schools, the charter school industry insisted it deserves its cut of the rescue funds too.

Writing in the pro-charter media outlet The 74, Nina Rees, executive director of the National Alliance for Public Charter Schools (NAPCS), said DeVos and governors should encourage districts to release these funds to schools “without regard to differences in school model,” meaning not to exclude charters.

In her letter telling governors where to apply for the emergency funds, DeVos specified the money was intended to support “schools (including charter schools and non-public schools),” meaning funds could be spent on charter schools and private schools.

Days before, Rees insisted charter schools be regarded as public schools and eligible for emergency aid, her organization also advised charter schools to apply for federal rescue funds for small businesses devastated by the pandemic.

Rees, who previously worked as a deputy assistant for domestic policy to former Vice President Dick Cheney, justified the request by claiming to the Education Week reporter “the last recession hit charter schools pretty significantly” and that the fallout from COVID-19 might adversely affect “private giving to support their operations.”

But in the same article, NPE’s Carol Burris pointed out that “charter schools have had no drop in the funding stream” as a result of the pandemic, because state funding for both charter schools and school districts has already been set for the current academic year.

“Once again, the charter sector, through the lobbying efforts of Nina Rees…worked behind the scenes to gain fiscal advantage for the privately operated schools they claim are public schools,” Burris wrote in a comment to the blog of education historian Diane Ravitch.

While most would agree that the current disruption to children’s learning is a disaster, fans of charter schools and other forms of school choice see an opportunity.

“It isn’t too early for parents to plan ahead for next year and beyond when school doors re-open,” wrote Joe Pantorno for New York City news outlet AMNY. “Charter schools have become a viable and attractive option for a child’s education,” insisted Pantorno, a sports editor.

In some districts where schools have struggled with the transition to online, charter schools have stepped up marketing campaigns, opened their enrollments mid-year to take in more students, and provided free computers to lure families away from public schools. Online charters in Utah and elsewhere have run advertisements urging parents to leave their public schools and enroll in privately operated online academies, which have continued to operate “largely unimpeded,” reported Rachel Cohen for The 74.

In Oklahoma, the state’s largest online charter, currently the subject of a lawsuit because its for-profit operator refuses to comply with a state investigation, “has had teachers recruiting new students on social media,” according to Tulsa World. The school is accused of recruiting “ghost students,” explained John Thompson for the Progressive, “who were technically enrolled but received minimal instruction from teachers.” Thompson also reports that the owners are alleged to have hidden their school’s low graduation rates and used the school’s management company to divert state funds for their own personal use.

In Florida, the state board of education is considering a request from Florida Virtual School (FLVS), the state’s online K-12 school, for $4.3 million in technology upgrades to boost its current capacity of 170,000 students to 470,000. FLVS, a nonprofit, also inked a contract at the end of March for $525,000 to provide online schooling in Alaska.

“As the pandemic forces schools to innovate, Americans will get a glimpse into what the future of learning looks like,” predicted Jonathan Butcher, a senior policy analyst at two right-wing think tanks.

Butcher’s claim appeared in a policy brief for the Mercatus Center, a privatization advocate at George Mason University, which is funded by the family foundation of Charles Koch and his late brother David. COVID-19 “could change education content delivery forever,” Butcher wrote, forcing schools to enter into “public-private partnerships with virtual learning providers.”

In a critical review of Butcher’s brief, Kevin Welner, a project director at the National Education Policy Center, warned that heedless efforts to strike deals with online education companies were “a clear example of ‘disaster capitalism’—the exploitation of instability and crisis to advance marketization.”

Welner pointed to a substantial body of evidence that online schools are ill-suited to address the broad purposes of schooling, which often include providing meals and health care services. These operations also tend to generate very poor academic results and under-serve struggling learners, especially students with disabilities.

Rather than rushing headlong into privatizing the public education system, Welner concluded that when the nation emerges from this dark period, “the real lesson for many Americans is a renewed appreciation for vital roles played by their children’s schools and teachers.”

This article was produced by Our Schools, a project of the Independent Media Institute.

Jeff Bryant is a writing fellow and chief correspondent for Our Schools, a project of the Independent Media Institute. He is a communications consultant, freelance writer, advocacy journalist, and director of the Education Opportunity Network, a strategy and messaging center for progressive education policy. His award-winning commentary and reporting routinely appear in prominent online news outlets, and he speaks frequently at national events about public education policy. Follow him on Twitter @jeffbcdm.