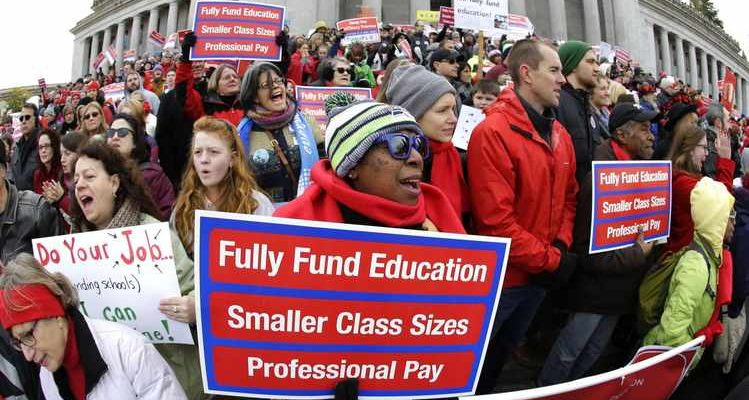 DeVos’ Education Department Accused Of Failing To Negotiate With Union

“Secretary Betsy DeVos and her management team are attempting to strip employees of their collective bargaining rights and kill the union.”

Betsy DeVos and the Department of Education are facing allegations of possible union busting.

The American Federation of Government Employees (AFGE) recently filed a complaint against the education secretary’s department accusing the department of unfair labor practices and failing to negotiate “in good faith” with the union.

AFGE, which represents 3,900 Education Department employees nationwide, is accusing the Education Department of “imposing an illegal document on its workers, which they had no bargaining over.” The union said in a press release that the department implemented a collective bargaining agreement instead of negotiating. The CBA, which took affect on Monday, takes away workers rights when it comes to “workplace health and safety, telework, and alternative work schedules,” according to AFGE.

“AFGE did not agree to these unilateral terms,” Young said. “AFGE is, and has been, eager to return to the table to negotiate a fair and just contract, which all employees deserve.”

The Education Department said the agreement was reached because AFGE “failed to respond in timely manner to negotiate over the contract proposed by the Department,” Liz Hill, spokeswoman, said to Politico.

But AFGE fired back at the Education department in a press release that read:

“Joining the union is voluntary for workers, yet AFGE and other federal unions are required by law to represent everyone covered by the union contract – even if they choose not to join. For this reason, Congress provided representational time so that the union can carry out its legal duty of fair representation to all those who are covered by the contract, including those who choose not to pay dues. Removing access to this time is like asking the fire department to operate without firetrucks or a firehose.”