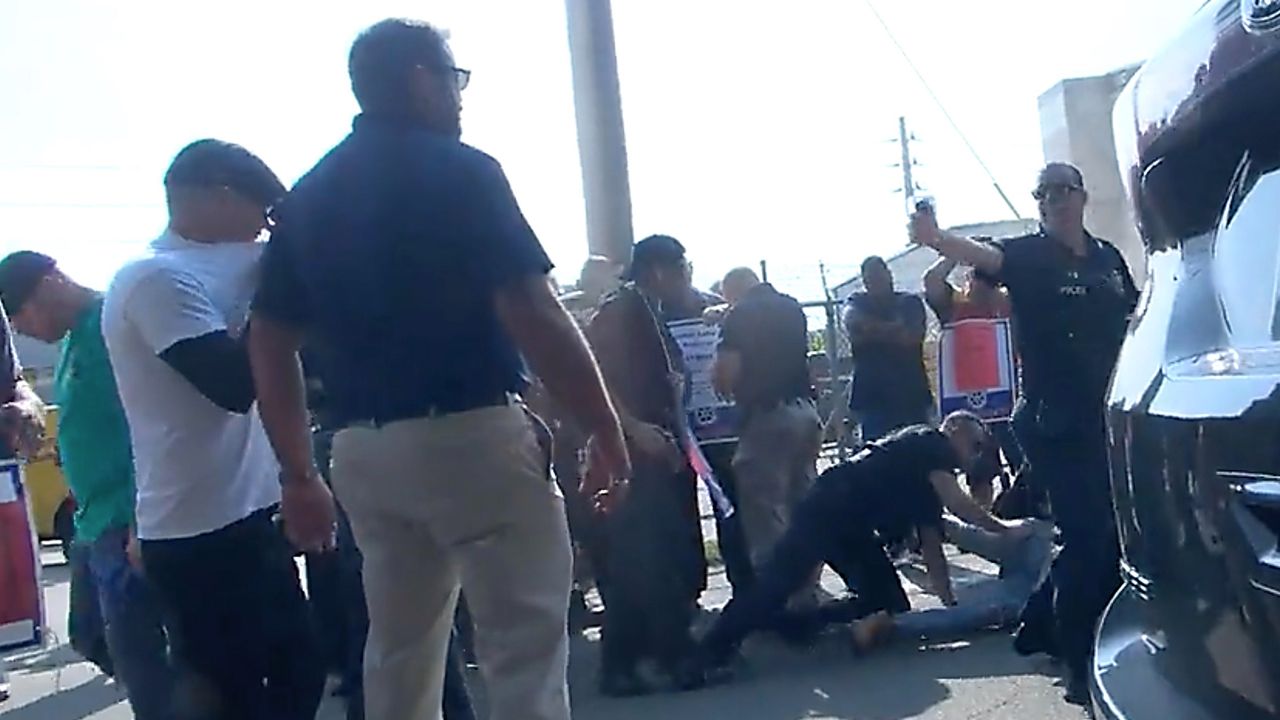 The workers are demanding wages to keep up with the cost of living, affordable health care, retirement benefits and safety issues. Northeast has hired scabs, who are reportedly being paid $55 an hour, with DHL drivers earning only $18 an hour on average.

Pawtucket police and Teamsters Local 251 confirmed the arrest of five people outside the DHL Express ServicePoint. The arrests took place as 50 to 60 protesters approached a gate which opens onto Concord Street, Teamsters business agent Thomas Salvatore told The Providence Journal.

An officer of IBT Local 251 said police tried to move the crowd away from the front of the gate. Rondelle Walker, a DHL courier, described to ABC 6 News the violence used against one of the protesting strikers: “She got pushed to the ground, knee to her face, head on her back, another person was literally pepper sprayed in the face. I was in the mix, I got pulled out, it was horrible.”

The DHL pickets faced violence earlier in the strike. On July 1, three arrests were made at the picket line outside the Northeast Transportation facility in Pawtucket. Matthew Taibi, Local 251 principal officer, told The Providence Journal at the time that an armed security guard came after him with a baseball bat.

The most recent arrests came after Rhode Island Governor Dan McKee, a Democrat, had just visited the picket line. He left before the arrests and a spokesman said he did not witness the incident and had no comment. Local 251 has supported McKee’s bid for reelection. He has received the endorsement of the Teamsters, AFSCME, the UAW, the National Education Association and other unions in Rhode Island, who falsely claim that the Democratic Party will support workers’ interests.

Delivery services such as DHL, FedEx and UPS are notorious for their abysmal pay and working conditions. Workers from the Pawtucket facility often drive 250 miles round trip in a single day, not accounting for delivery stops, traveling as far as the tip of Cape Code.

One of the main demands of the DHL workers is affordable health care. The current “family plan” costs at least $370 a week. Paying for health care through the company is out of reach for most workers on wages of $18 an hour.

The Teamsters, whose membership is 1.2 million nationwide, has allowed DHL workers at Northeast Transportation and other contractors to remain isolated from the main DHL contract. This summer, the IBT ratified a new national contract which excludes workers at these contracted locations.

Deutsche Post DHL Group, the world’s leading logistics company and the parent of DHL in the US, operates in more than 220 countries and employs about 590,000 employees worldwide. Deutsche Post DHL generated revenues of €22.6 billion (US$23 billion) in the first quarter of 2022.

Delivery and transportation workers have been in the forefront of a global upsurge of workers’ struggles, fighting against growing inequality and inflation, the consequences of the coronavirus pandemic and the social effects of the government’s war policies.

With a September 16 expiration of a government-mandated “cooling-off period” looming, the railroad unions are seeking to head off a strike by around 70,000 rail workers. Smaller craft unions have cut separate deals with the railroads in a deliberate act of sabotage by the union bureaucracy.

The contract for workers at United Parcel Service (UPS), the US-based multinational shipping company that employees more than half a million workers worldwide, expires in July 2023. UPS workers are also members of the Teamsters. The company, with record profits of nearly $13 billion in 2021, cut extra pay for some part-time UPS workers in certain cities where “the job market was particularly tight and during the busy holiday season,” saying that the additional pay was not supposed to be permanent.

One of the main concerns of UPS drivers, along with improved wages and benefits, is protection for workers from the effects of high temperatures. Anger is growing among drivers over a spate of deaths and hospitalizations over the summer, which has seen record heat. There is no air conditioning in UPS delivery vans, and workers have increasingly experienced episodes of heat exhaustion, dehydration and fatigue.

In late June, Esteban Chavez, Jr., a 24-year-old delivery driver in Southern California, collapsed and died while on deliveries. Another UPS worker, Jose Rodriguez, 23, was found dead from heat exhaustion at the end of his shift.

The Teamsters have tried to defuse the mounting outrage over these conditions by hosting public rallies across the country. Teamsters International President Sean O’Brien said in a statement that the union is “resolved to win the best contract for UPS members and to reset the standards for wages and benefits in this industry by August 1, 2023,” when the UPS contract expires.

“We won’t extend negotiations by a single day,” O’Brien said. The Teamsters’ record at DHL and the isolation of the Pawtucket strikers exposes the falsehood of such claims. A winning strategy of workers at DHL, UPS and other logistics companies requires building rank-and-file action committees, independent of the unions and their political representatives, to organize a real fight.