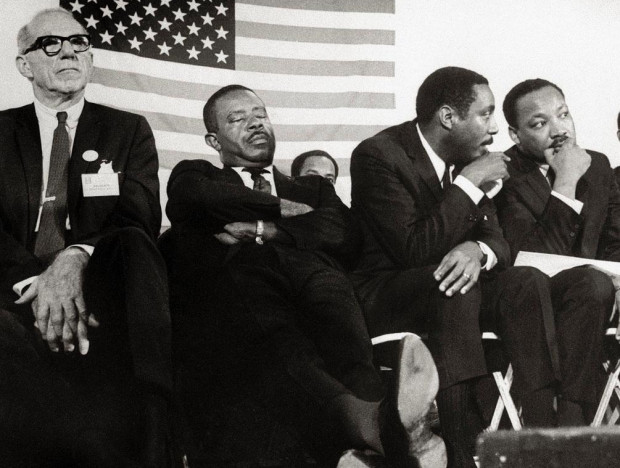 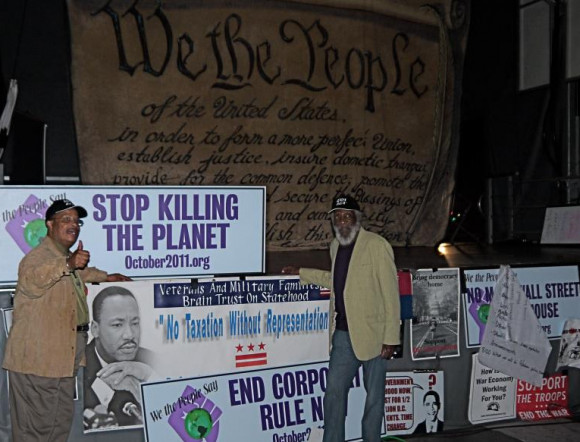 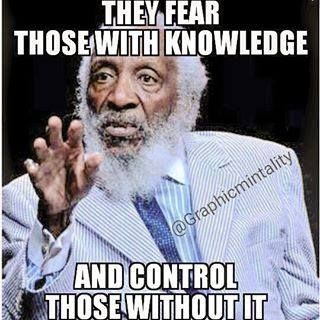 The great civil rights activist Dick Gregory died this week. His book, Nigger, was published when I was nine years old and had a long-lasting impact on my political development and views.

He spoke at my university and added to helping to shape my political views and push me toward activism.

When we organized the Occupation of Freedom Plaza in Washington, DC he was a regular visitor and spoke at the event.

“Mayor Daley and other government officials during the riots of the ’60s showed their preference for property over humanity by ordering the police to shoot all looters to kill. They never said shoot murderers to kill or shoot dope pushers to kill.”

“The way Americans seem to think today, about the only way to end hunger in America would be for Secretary of Defense Melvin Laird to go on national TV and say we are falling behind the Russians in feeding folks.”

“What we’re doing in Vietnam is using the black man to kill the yellow man so the white man can keep the land he took from the red man.”

Gregory was feared by the political establishment. The Chicago Tribune reported this week that when he ran for mayor of Chicago and president of the United States, the FBI considered Gregory such a threat that Hoover ordered the Chicago office of the FBI to enlist the Outfit in an effort to “neutralize” the comedian during the race. 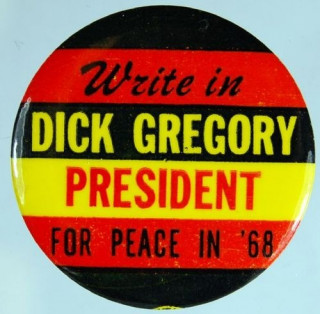 Not only did Hoover sic FBI agents on Gregory, he also sought to get the mafia to join the attack on Gregory. When the 1967 memos from the FBI were revealed to him, Gregort responded:   “This piece of paper has the director of the most powerful police agency in the history of the planet proposing to contact the Mafia so that they could work together”.

Gregory, one of the great activists of his era, was memorialized in the Americans Who Tell The Truth project. Below we reprint their description of Gregory and his work.  KZ 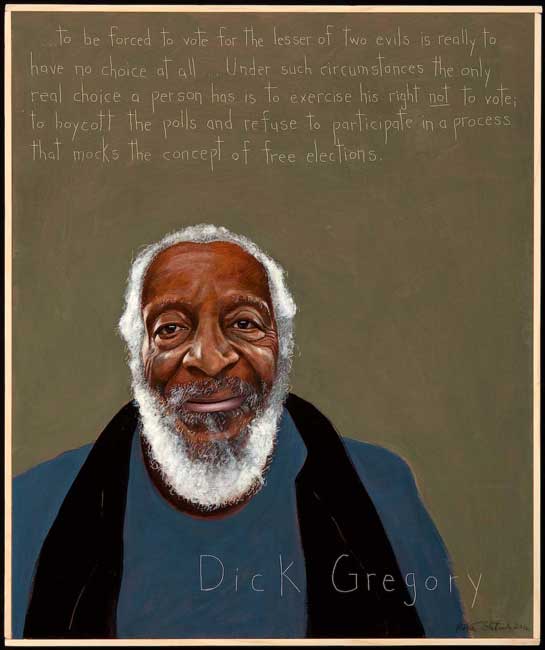 Above: Painting by Robert Shetterly for Americans Who Tell The Truth

“…to be forced to vote for the lesser of two evils is really to have no choice at all. …Under such circumstances the only real choice a person has is to exercise his right not to vote; to boycott the polls and refuse to participate in a process that mocks the concept of free elections.” 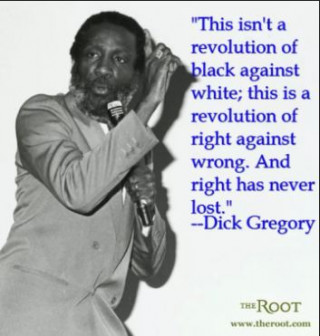 Over the course of his life, Dick Gregory has been known as a writer, comedian, pitchman and social activist.

He was born on October 12, 1932, in St. Louis, Missouri to a single mother. They were so poor that sometimes he didn’t have clothes and would go outside to play wearing one of his mother’s dresses. When neighborhood kids teased him, he deflected their comments with humor, learning at a young age that speaking up made a difference and that jokes could be serious. But, he didn´t just crack jokes; as a high school student, Gregory led protests against segregated schools.

After high school, he won a track scholarship to Southern Illinois University at Carbondale, where he completed two years of school before being drafted into the military in 1954. He later returned to college, only to drop out again, disillusioned by the university’s focus on his athletic ability. The university “didn’t want me to study, they wanted me to run,” he said. (1) 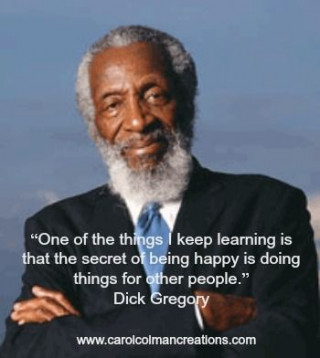 While serving in the Army, Gregory had cultivated his early talent for comedy. After leaving college for the second time, he moved to Chicago and got involved in the comedy scene there.  By the early 1960s, he was appearing in important Chicago clubs. Unlike most Black comedians of the time, race was a major part of his act. One routine led to his big break:

“Last time I was down South, I walked into this restaurant, and this white waitress came up to me and said, ‘We don’t serve colored people here.’

“I said, ‘That’s all right, I don’t eat colored people. Bring me a whole fried chicken.’ 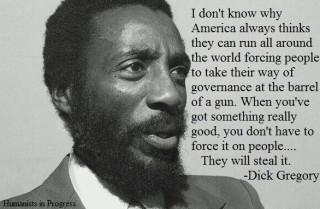 “About then these three cousins come in, you know the ones I mean, Klu, Klucks, and Klan, and they say ‘Boy, we’re giving you fair warning.

Anything you do to that chicken, we’re going to do to you.’ So I put down my knife and fork, and I picked up that chicken and I kissed it.” (3)

Gregory became well-known and financially successful as he addressed social issues in his comedy routines. In the 1960s, he began to spend less time on comedy and more on civil rights activism, including marches with Martin Luther King Jr. and Malcolm X. 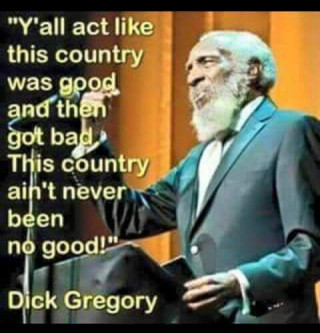 In a 2010 interview with Ebony magazine, he explained his shift from entertainment to activism: “Even as a young boy, I wanted to do something important, but there was no particular thing that inspired me. It was a person. That person was Medgar Evers…After he received word that I had gone to a few SCLC (Southern Christian Leadership Conference) rallies, he called me and said, ‘Dick Gregory. I need you to come to Jackson and march with me.’ …The nightclubs, the money, the jokes all came secondary after that. I am still more inclined to go and march for a young man wrongfully killed in Harlem than do a gig at a university. Once the movement is in you, it’s there. It never leaves” (5). 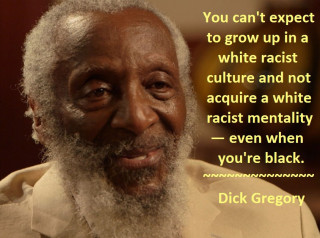 To challenge established power structures, he ran against long-time Mayor Richard J. Daley in Chicago’s 1966 mayoral election. Two years later, he received 1.5 million votes as the Freedom and Peace Party’s write-in candidate in the Presidential election, campaigning on a platform for civil rights, peace in Vietnam, and racial and social justice. Though he never won an election, his candidacies called attention the failings of the current electoral systems and gained attention for the New Left and Black Power movements. In the 1970s, Gregory became a vegetarian because of his commitment to non-violence. He studied nutrition and became an advocate for healthy eating and lifestyles. 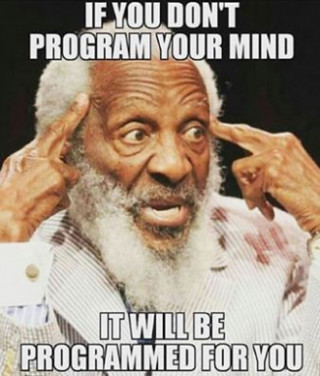 Dick Gregory is the author of thirteen books. He and his wife raised ten children and have twelve grandchildren. In his lifetime, he has gone on over 150 hunger strikes to protest injustices including war, hostage situations, and the death penalty. He has worked tirelessly for decades and he continues to write, perform, and protest. Critics often label Gregory a conspiracy theorist. In a 2011 interview, he claimed that title as “a badge of honor.”

While promoting his 2001 memoir, he commented on the extraordinary achievements of the American Civil Rights Movement: “In the history of this planet, there have been no one to make the progress that African-Americans have made in a 30-year period, in spite of black folks and white folks lying to one another, not being fair, not being honest.” 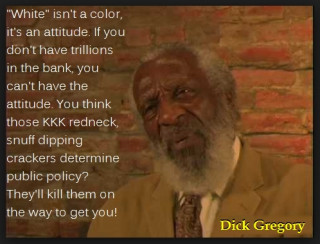 Even though the U.S. has a history of extreme hate and violence, he emphasizes that the people who have had the courage to fight racism have seen results.

Gregory believes that people do the right thing when they discover each other´s shared humanity. In the scenario below he imagines two groups of people who would typically hate each other helping each other through a crisis:

“In some kind of way, racism is so fragile. Racism is a punk. For instance, you and I driving down the highway. You have your grandchild; I have mine. The cars steer and turn over. Three black militants talking `Cracker this’ and `Cracker that’ and three Ku Klux Klans come over, and both…groups is lifting that car up. And I do not see your Klan sheet, nor do you hear the word `Cracker.’ That’s how fragile [racism can be].”(1)

By emphasizing our shared humanity–which can often be found in humor–Gregory believes that we can continue to overcome years of racism and injustice.