Did Exxon Mislead Investors About Climate-Related Risks? It’s Now Up To A Judge To Decide.

By Nicholas Kusnetz, Insideclimatenews.org
November 12, 2019
| Educate!
Did Exxon Mislead Investors About Climate-Related Risks? It’s Now Up To A Judge To Decide.2019-11-122019-11-12https://popularresistance-uploads.s3.amazonaws.com/uploads/2017/12/popres-shorter.pngPopularResistance.Orghttps://popularresistance-uploads.s3.amazonaws.com/uploads/2019/11/exxon-court-protests-900_eduardo-munozalvarez-viewpress-e1573582301139.jpg200px200px

Above Photo: Protesters held signs outside courthouse on the opening day of the Exxon trial. Two and half weeks later, on Nov. 7, the trial ended. A judge expects to issue a ruling within weeks. Credit: Eduardo MunozAlvarez/VIEWpress via Getty Images

Lawyers for New York State and ExxonMobil wrapped up a landmark climate fraud trial on Thursday, shaping a tangle of testimony and evidence into competing narratives on whether the oil company misled investors about the risks it faces from climate regulation.

Jonathan Zweig, who gave the closing arguments for the New York attorney general’s office, described the case as a classic securities fraud trial that happened to be about climate change, which he said “may well be the defining risk for oil and gas companies like ExxonMobil in the coming decades.”

Zweig said the evidence showed clearly that Exxon had misled investors by downplaying those risks significantly.

Theodore Wells, the lead lawyer for Exxon, argued that the same evidence shows “that this case is meritless, that each and every allegation in the complaint is not true and not connected to the reality or the truth, and that ExxonMobil has done nothing wrong.”

The two sides actually agree on many of the core facts of the case, chiefly that Exxon used two different estimates for the cost to its business from future climate regulations.

The company disclosed one of those estimates in numerous public reports. A second estimate, which was lower than the public figure, was not disclosed to investors until 2014, when it appeared in one sentence in one report. Much of the case hinges on whether that disclosure was clear and adequate, or whether anyone noticed it at all.

The closing statements capped an investigation that began four years ago, after reports by InsideClimate News and the Los Angeles Times detailed what Exxon knew about the impact of fossil fuels on global warming from its own climate science research decades ago. The proceedings have grown contentious at times—the attorney general’s office tried to have Justice Barry Ostrager removed from the case last year after learning he owned shares of Exxon stock. But Ostrager ended the trial by congratulating both sides for their diligent and professional preparations and performance. He has said he will issue a ruling before the end of the year.

While the case centers on discussion of climate change risks, the trial itself—and the legal questions the judge will decide—revolve around relatively narrow questions of New York securities law.

What Were Investors Told?

“At the end of the day, this case is about two things,” Zweig said. The questions under New York’s Martin Act, he said, are whether Exxon misrepresented how it used its carbon cost estimates, and whether a reasonable investor would have thought this was important.

While Exxon disclosed that its proxy cost of carbon—which estimates the financial impact of regulations decades into the future—rose to as high as $80 per ton in 2040, Zweig said “Exxon applied much lower costs or no costs at all” to the emissions that it projected would be produced by its operations.

Exxon has said that the proxy cost was meant to estimate the impact of regulations on global demand for oil and gas. But when trying to project the expenses that it will incur at its operations, such as refineries, Exxon used a different estimate that it calls a “greenhouse gas cost.” This was based on a separate set of assumptions, executives testified.

Zweig then walked the judge through a timeline of the case.

It begins with an email from 2011, when Exxon’s greenhouse gas manager raised the idea of aligning the lower, internal cost estimate with the public proxy cost. Two years later, Exxon came under increasing pressure from activist investors to better disclose how it was addressing the risks from future regulations, and in particular the risk that it would be unable to produce some of its oil and gas reserves—that they’d become “stranded”—because of climate concerns or regulations. Exxon executives then held a series of meetings and phone calls with the investors and eventually issued two reports to address their concerns.

Through all of this, Zweig argued, the company and its executives implied that it was applying the higher proxy cost to the emissions from its own projects, when it wasn’t.

The strongest evidence, he said, came from the notes attached to a presentation that a senior ranking manager gave to Exxon’s top management in May 2014. The notes recommended that the company align the two cost estimates, and among the reasons it listed for doing so was that Exxon had “implied” in the two reports that it was applying its proxy cost to the emissions from its projects. One month later, Exxon raised its internal greenhouse gas cost to match its proxy cost. 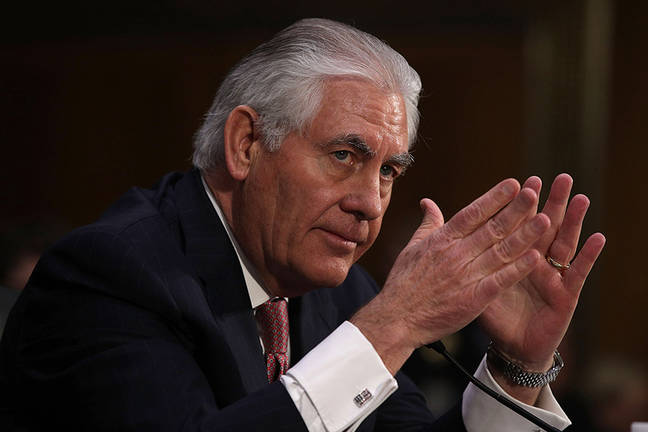 This new policy quickly led to problems for the company, Zweig said, particularly in Alberta, Canada, where Exxon has invested tens of billions of dollars in the oil sands, one of the most expensive and carbon-polluting sources of oil.

Beginning that fall and stretching into 2016, planners at Exxon’s Canadian affiliate, Imperial Oil, started applying these higher cost estimates in various internal models and discovered that they resulted in huge costs, slashed oil reserves and even lopped decades off the time span that one project could expect to be profitable.

Exxon has maintained that the revelations by these Canadian planners had no bearing on the company’s finances, in some cases because the projects had not been funded, and in others because they discussed matters like oil reserves that didn’t directly affect revenue. Zweig rejected that claim, pointing to corporate presentations to investors that touted the company’s sizable total reserves base, and to the billions of dollars that have been spent on the projects in question.

So what did Exxon do, Zweig asked rhetorically. Instead of applying the new cost estimates, which rose steadily into the future, it applied the fees set out in existing legislation in Alberta and assumed that greenhouse gas costs would stay flat indefinitely. He compared this to telling investors you are taking out an insurance policy without actually doing so.

“Exxon never told its investors that it was ripping up its [greenhouse gas] proxy cost insurance policy just when those costs were most significant,” he said.

Exxon has maintained that it did disclose the fact that it used something it called a “GHG cost”—distinct from its proxy cost—pointing repeatedly to one sentence of one of the reports it issued in 2014 in response to investor pressure. Wells began his closing argument by remarking on how ridiculous it was that two weeks of trial have focused on one sentence. 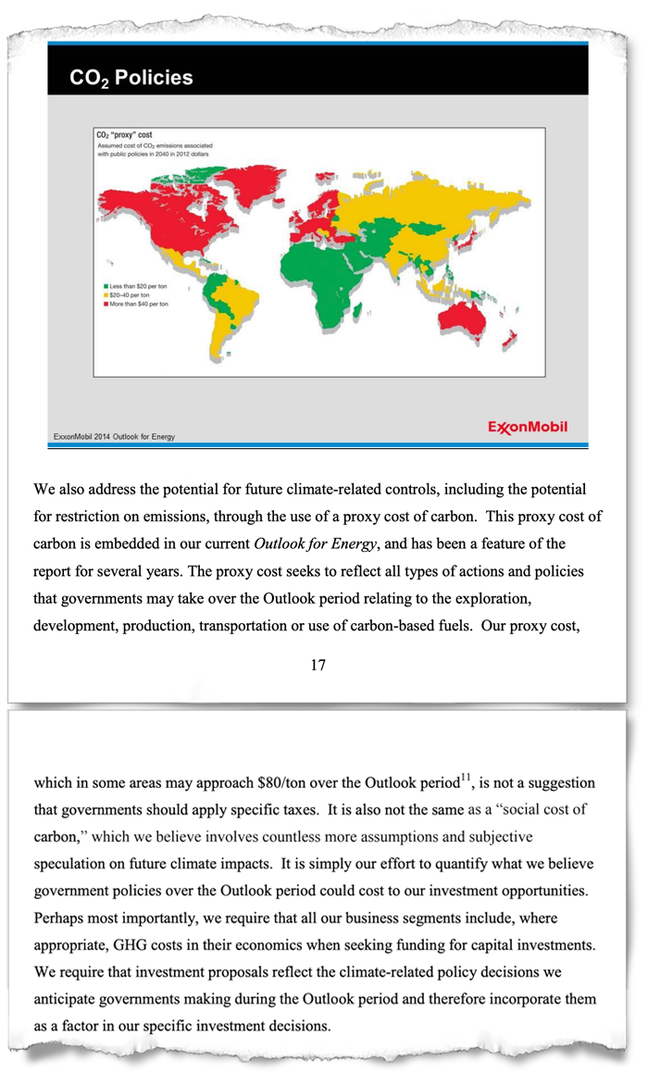 The paragraph mentioning a greenhouse gas (GHG) cost in the 2014 Exxon report “Energy and Carbon – Managing the Risks.”

But Zweig argued that none of the witnesses who testified—save for those who worked at Exxon—understood this distinction. Exxon’s external auditor, with the firm PwC, used the terms interchangeably in a memo he wrote to the company, even after meeting with Exxon’s greenhouse gas manager to discuss the issue.

Even Thomas Eizember, a former senior planning manager at Exxon, used the term “GHG cost” internally to refer to the proxy cost and testified that it was a “generic” term.

“If GHG cost, as Mr. Eizember testified, is really a generic, nonspecific term,” Zweig said, “how were investors supposed to know that it was somehow distinct from the proxy cost?”

Wells focused much of his time arguing that Attorney General Letitia James’s office failed to make the case that any investor actually cared about whether the company had two costs or one, or how it used them. In order to meet the legal standard, the attorney general must show that investors thought the disclosures were “material,” or important.

He argued that the attorney general’s witnesses failed to back up the state’s claims.

Wells pointed to Michael Garland, who helps oversee New York City’s pension funds but does not actually make decisions about how to invest. Garland was among the investor representatives who met with Exxon executives to discuss climate risks. When pressed, Garland testified that he had not closely read the Exxon disclosures in question.

An expert witness hired by Exxon had testified he had searched through market analyst reports and found that hardly any of those reports discussed Exxon’s proxy cost or its climate disclosures, and that none used that information to change their outlook on the company.

Even if they did, he said, Exxon’s reports stated clearly that the company does not publicly disclose the economic assumptions it uses internally. His team has said that any conclusions investors may have reached about how it applied its proxy cost internally were based on their own misguided assumptions.

The attorney general failed to establish any link between how Exxon assessed climate risk internally and the earnings or losses it reported in its financial disclosures, Wells said. And he argued that it was impossible for investors to be affected by the company’s internal accounting, because they had no access to it anyway.

“This case is about something illogical,” Wells said.

Zweig, however, argued that the evidence is clear that the investment community does indeed care about climate change.

He cited Exxon’s own filings, which report climate change regulations as a risk, and pointed to memos and reports by major shareholders, including the investment firms State Street and Vanguard, that said climate change is a risk to oil companies and that carbon pricing is an important way to address the risk. To argue that Exxon’s climate disclosures were immaterial to investors, he said, would be to ignore all these reports and statements.

What Happened to the Question of Intent?

The final trial day did include one surprise.

Zweig said the attorney general was dismissing two of the claims it had included in the complaint. The state would only press the Martin Act claim and a second claim under a different law.

Wells was animatedly upset by the move.

“We didn’t come here and try this for two weeks for them to stand up after everything and say we are not pressing the two claims that have caused, in many respects, the most severe reputational harm to the company and the executives,” Wells said.

He pointed out that many of the attorney general’s claims, including that Exxon had erected a “Potemkin Village” on climate risk, assumed there was intent, and it would be unfair for them to back away from those claims at the last minute.

Dropping the two claims means the judge will not issue a ruling on whether the attorney general did or did not prove intent. That closure would be important, Wells said, since similar cases were being filed, like the lawsuit filed two weeks ago by Massachusetts’ attorney general. After a prolonged back and forth, Ostrager said he was dismissing the claims with prejudice, meaning they can’t be refiled by the attorney general in this court.

The parties now have to file their final memoranda in the case by Nov. 18. Ostrager has said he will issue a ruling within a month of receiving them.