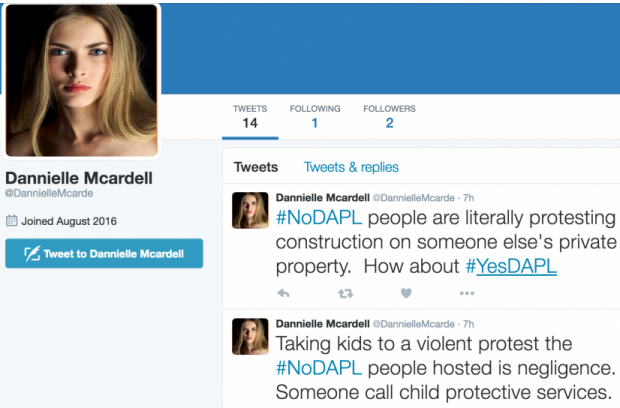 Above Photo: From desmogblog.com

DeSmog investigation has revealed the possibility that a front group supporting the controversial Dakota Access Pipeline (DAPL) — the Midwest Alliance for Infrastructure Now (MAIN) — may have created fake Twitter profiles, known by some as “sock puppets,” to convey a pro-pipeline message over social media. And MAIN may be employing the PRservices of the firm DCI Group, which has connections to the Republican Party, in order to do so.

DeSmog tracked down at least 16 different questionable Twitter accounts which used the #NoDAPL hashtag employed by protesters, in order to claim that opposition to the pipeline kills jobs, that those protesting the pipeline at the Standing Rock Sioux Tribe’s encampment use violence, and that the pipeline does not pose a risk to water sources or cross over tribal land.

On September 13, people began to suspect these accounts were fake, calling them out on Twitter, and by September 14, most of the accounts no longer existed.

The Dakota Access Pipeline is set to carry oil obtained via hydraulic fracturing (“fracking”) from the Bakken Shale basin in North Dakota across the Dakotas, Iowa, and Illinois. Its owner, Energy Transfer Partners (ETP), says it plans to talk to the Obama administration and “reiterate [its] commitment to bring the Dakota Access Pipeline into operation.” It will do so despite the administration requesting that the company halt construction “voluntarily — particularly around the contested sacred tribal sites located 20 miles east and west of Lake Oahe and the Missouri River — until further notice.”

In his memorandum announcing his company’s plans to do so, ETP CEO Kelcy Warren espoused many of the same arguments that were deployed by the Twitter sock puppets, which calls into question whether his company helped spearhead the social media campaign behind the scenes in order to create the appearance of grassroots support, a technique known as “astroturfing.”

In that memo, Warren said his company plans to engage more aggressively in the PR sphere.

“It has not been my preference to engage in a media/PR battle,” wrote Warren. “However, misinformation has dominated the news, so we will work to communicate with the government and media more clearly in the days to come.”

Vicki Granado, a spokesperson for the company, did not respond to a request for comment.

In the meantime, as all stakeholders in the debate await a definitive next move from the Obama administration, protests both on-site and nationwide have continued, with a militarized police presence at the Sacred Stone Camp intensifying. U.S. Sen. Bernie Sanders (I-VT) spoke at a September 13 Washington, DC protest against the pipeline, whileU.S. Representatives Raul Grijalva (D-AZ) and Raul Ruiz (D-CA) that same day called for a congressional oversight investigation of the hotly contested permitting issues which have arisen in the ongoing saga over the pipeline’s future.

With that backdrop, in came the “sock puppets” for their own September 13 day of action on Twitter — and with MAINlikely pulling the strings.

The sock puppet profiles had names such as Ashley Lovinggood, Garnett Vreeken, Yong Fetner, and Ying Baars, and all of the profile pictures featured women. Besides tweets promoting the Dakota Access Pipeline, what links all of the bogus profiles together is that they all “follow” (similar to “liking” a page on Facebook) the company Hootsuite.

Hootsuite serves as a social media platform management tool which allows an administrator for many different social media accounts, such as Facebook and Twitter, to toggle quickly between accounts and send out posts in the form of tweets and other status updates. One of those accounts, that of Angla Dullea, formerly followed MAIN — and like all of the other pages — also followed Hootsuite; that is, until the account became suspended.

Dullea also retweeted a tweet from a group called Standing Rock Fact Checker, which on its website describes itself as a project of MAIN. The website also states it is “dedicated to promoting the truth” and battling “misinformation about the approved — and nearly complete — Dakota Access project.” Five other suspicious Twitter profiles also shared Fact Checker tweets.

Reverse photo searches on Google revealed that the pictures used for other sock puppet profiles also appeared on a dermatologist website, a mail order bride website, and a hairstyle website featuring a photo of Eva Longoria, as well as images of Chinese model Crystal Wang Xi Ran, singer Keri Hilson, and the late singer Amy Winehouse.

The use of political bots and sock puppets is nothing new and in fact, has become normalized by political factions worldwide, explained Norah Abokhodair of the Political Bots research program based at the University of Washington and Oxford University.

“There are many ways in which social bots can disrupt or influence online discourse, such as, spamming, phishing, distributed denial of service attacks (DDoS), or other nefarious activities,” Abokhodair explained, pointing to examples such as the Syrian Civil War bots and bots used in Turkey. “They can also be deployed for sophisticated activities like astroturfing, misdirection (botnet that tries to get the audience to attend to other content by spamming the hashtag) and smoke screening (serves to hide or provide cover for or obscure some type of activity).”

MAIN was the only industry group to issue a press release in response to the Obama administration’s September 9 announcement halting construction on a portion of the Dakota Access Pipeline. Its press release contained a statement attributed to spokesperson Craig Stevens. Stevens also recently did an interview with KVLY–TV, the NBC andCBS affiliate for Fargo, North Dakota. When on TV, however, he was billed as the “spokesperson for a pipeline sort of group, if you will” by segment host Chris Berg.

Despite the lack of disclosure by KVLY and Berg, it turns out that Craig Stevens actually works as Media Affairs and Crisis Management Lead for DCI Group. His DCI Group contact information is listed for MAIN‘s profile page on the websitePR Newswire.