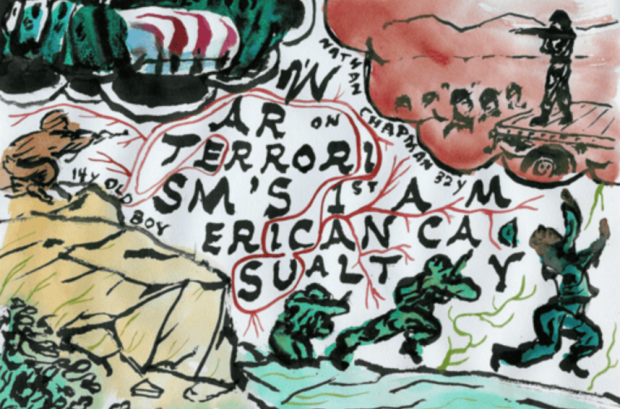 Did Trump Really End The CIA’s Secret War In Syria?

“Trump Ends Covert Aid to Syrian Rebels Trying to Topple Assad,” read a July 19 New York Times headline. Citing The Washington Postas its source, the article noted that the official termination of the “secret” U.S. program “was never publicly announced, just as the beginnings of the program four years ago were officially a secret, authorized by President Barack Obama through a ‘finding’ that permitted the C.I.A. to conduct a deniable program.”

“Mr. Trump’s decisions,” said The Times,  “amounted to an acknowledgment that no escalation of the program, which began in 2013 in concert with the C.I.A.’s counterparts in Saudi Arabia, Turkey and Jordan, was likely to yield a different result.”

The CIA and its “counterparts” were intervening in Syria even before 2013, if not congruent with the brief Arab Spring mobilizations of 2011, when poor peasants, democratically minded youth, and others protested against the Bashar Assad government’s neo-liberal and repressive policies. The New York Times revealed on June 21, 2012, that the CIA had been ferrying arms, recruiting, and training anti-Assad groups based in Turkey.

The U.S. was simultaneously the major power behind the Syrian National Council (SNC), which it established to be the new Syrian “government in waiting.” The SNC consisted of an exile-based 270-member leadership core that was overseen by the U.S. State Department and funded by most of the Gulf State monarchies. Within a year the SNC exploded as it became clear that it was dominated by the Muslim Brotherhood, whose on-the-ground forces in Syria regularly collaborated with the al-Qaeda offshoot, the Nusra Front, and related jihadist groups.

This collaboration, together with the poor coordination and fighting ability of many local Free Syrian Army units, led the CIA to seek out more “reliable” troops that would fight under its direct control. Over the past five-plus years the C.I.A. and other U.S. government agencies have overseen various and re-named reincarnations of the SNC and FSA, all aimed at publicly presenting these as secular and democratic forces as opposed to their jihadist and otherwise reactionary and pro-imperialist nature. (See Stephen Gowans, “Washington’s Long War on Syria,” Chapter 4, “The Myth of the Moderate Rebel,” pp. 141-160.)

With Libya’s pulverizing defeat under their belts, via the U.S. and NATO’s “humanitarian war” in that country, the original imperialist expectation was that Assad’s army would crumble and his government would fall in a matter of weeks or months. When this proved illusory, the now-admitted “covert” operations began in earnest, soon to include an estimated 50,000 jihadist fighters from 100 countries, but mostly from the Middle East, supported by untold billions of dollars in U.S., NATO, and other “coalition” nations’ arms, organized to accomplish in Syria what U.S. imperialism had facilitated, in one form or another, in Afghanistan, Egypt, Libya, and Iraq.

Assad’s repression of the protests in March 2011 provided the required U.S. pretext for his instant demonization and the subsequent demand of the Obama administration and its spokespersons, Secretaries of State Hillary Clinton and John Kerry, that “Assad must go.”

General Tony Thomas, head of the military’s Special Operations Command, provided, according to The New York Times, “the first public confirmation by an American official that the Trump administration had ended a secret C.I.A. program to arm Syrian rebels.” While the program remains “classified,” when asked if it was aimed at currying favor with Russia, Thomas responded, “At least from what I know about that program and the decision to end it, it was absolutely not a sop to the Russians … it was a “tough, tough decision.” The CIA, upstaged by Trump, said The Times, “declined to comment.”

In point of fact, yesterday’s “covert” operations in Syria have at least in part been replaced by the Trump administration’s overt “no fly zone” war over Syria today. Utilizing their massive air-power superiority in the region, U.S. fighter jets now routinely attack Syrian government troops and those of its allies from Iran and Hezbollah from Lebanon whenever they move to challenge U.S.-backed and still existing “rebel” positions in areas where the U.S. contemplates a long-term, if not permanent presence. (See “President Trump’s ‘no fly zone’ escalates U.S. war on Syria” by this writer in the July issue of Socialist Action.)

Having lost most of the territory that the reactionary U.S.-allied forces had previously occupied, today’s bipartisan imperialist war strategy revolves around establishing control over key border areas in the north as well as in southern Syria for future use, the latter likely as a future pipeline route across the Middle East to the Mediterranean Sea. U.S. wars there, including in Iraq, buttressed U.S. corporate control of vast oil and natural gas resources that in time will require more competitive or advantageous routes than those planned by Russia. “To the victor, goes the spoils of war!” as President Trump is fond of proclaiming.

That the U.S. was conducting a covert war against Syria was no secret. Its basic outlines were frequently reported by The New York Times, with its Middle East Bureau Chief Anne Barnard periodically citing the details, albeit usually buried deep in her articles that aped the imperialist line justifying every U.S. war in the region.

Largely based on Barnard’s revelations, the bulleted selections below, taken from my Jan. 18, 2016 article entitled “U.S. imperialism’s Syria strategy,” provided an accurate summary of at least some of the key U.S. “covert” war efforts.

* “U.S. Major General Michael Nagata was unceremoniously removed some two months ago after his $500 million Syrian assignment to train by the end of the year a projected 5400 Syrian infantrymen to supposedly fight ISIS (Islamic State of Syria and Iraq) “languished in complications,” according to U.S. News and World Report. This project ‘ultimately yielded a force of fewer than 60, most of whom were immediately captured or voluntarily surrendered their U.S.-provided military equipment to extremist groups. Nagata’s program, aimed at training 15,000 such fighters over the next three years, was similarly abandoned.’”

* “Today, after four and half years of U.S. ‘training of security forces,’ supposedly to defeat ISIS, some two-thirds of Syria, mostly thinly-populated areas, is under the control of one or another jihadist group—either the Al Qaeda-affiliated Al Nusra Front, the Islamic State (ISIS) itself, or other Islamist groups. Virtually all are directly, indirectly, or covertly armed and financed by U.S. imperialism, its NATO allies, the Saudi government (and “private” Saudi billionaires), Qatar, the United Arab Emirates or other Gulf State monarchies.

* “In place of this failed program the Obama administration recently announced a ‘new program’ where, ‘for the first time the Pentagon is providing lethal aid directly to Syrian rebels, though the C.I.A. has for some time been covertly training and arming groups fighting Mr. Assad’ (emphasis added). (The New York Times, Oct. 9, 2015).”

In the same article, I wrote, “The U.S.-allied Saudis and the Turks today account for the lion’s share of ISIS’s finances and weapons—undoubtedly with the full knowledge of the U.S. government. The reactionary Turkish government of Recep Tayyip Erdogan, a U.S. NATO ally, still controls important portions of its southern border with Syria and utilizes these as central corridors for the entrance of thousands of international ISIS fighters to Syria to depose the Assad government. In the same manner over 1000 trucks from ISIS-controlled oil fields in northern Syria serve as the main conduit for ISIS-smuggled oil into Turkey.”

Today, with the covert cat out of the bag, The Times asserts that this allegedly now defunct CIA program “joins similar failed efforts to deliver arms and money to groups seeking to overthrow governments that Washington found noxious, most famously the Kennedy administration’s disastrous effort to do away with the government of Fidel Castro in Cuba.”

Russia’s “targeting and badly weakening the C.I.A.-backed rebels, who were the most capable of the opposition fighters [against Assad]” was seen by The Times as decisive to the Assad government’s winning back Syrian territory. In this regard the Syrian government’s request for Russian assistance was wholly within its right to self-determination, that is, to defend itself against U.S. imperialist intervention, war, and the organization of a “rebel” army aimed at the removal of the Syrian government itself.

As it turned out, U.S. aid to these same “rebels” was not enough to allow them to achieve key U.S. objectives. That is, according to The Times of July 19, it was “not sufficient to clear the way for their takeover of major cities or [to] approach the capital, Damascus.” These issues, along with the now undisputed fact that the vast array of U.S. arms supplied to these same rebels ended up in the hands of forces that the U.S. deemed terrorist, essentially convinced Trump, if not his generals, that a total U.S. victory in Syria was not possible—unless, that is, the U.S. was prepared to engage in yet another land war akin to the present imperialist catastrophes in Afghanistan and Iraq.

After six years of U.S.-orchestrated war in Syria, at a cost of 500,000 dead and nearly half the population displaced or in exile, U.S. imperialism continues its effort to dominate a poor nation in order to advanced the corporate interests of the one percent, with Trump’s Secretary of State Rex Tillerson, former chief executive officer of one of the world’s leading fossil fuel multi-national corporations, Exxon-Mobile, perhaps being the visible symbol of all that is rotten and corrupt in the imperialist U.S. body politic.

The demand for the immediate and total withdrawal of all U.S. forces from Syria and the Middle East must stand at the center of the U.S. antiwar movement’s efforts today. Self-determination for Syria! U.S. Out Now!