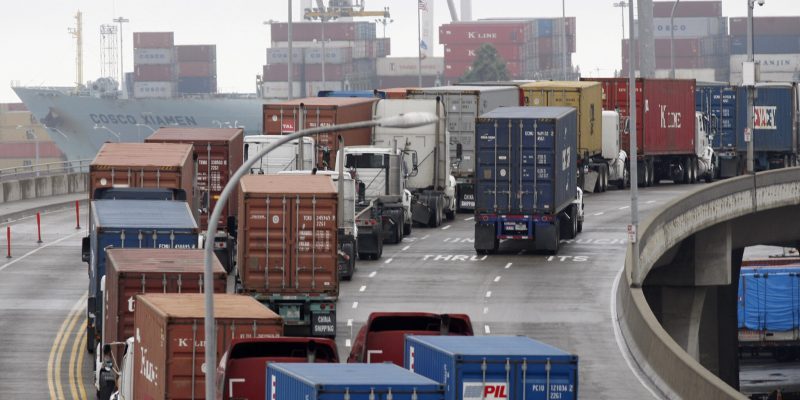 Above Photo: Shipping container trucks sit in traffic as the International Longshore and Warehouse Union strikes, putting a halt to most of the work at the busiest seaport complex in the nation on November 29, 2012 in Long Beach, California. David McNew/Getty Images.

Diesel Vehicles Represented 5 Percent Of Traffic Through The Urban Areas But Emitted Up To Half Of All Nitrogen Dioxide Pollution.

One of the studies, published by University of Virginia researchers earlier this month, used satellites to measure the near-daily emissions of nitrogen dioxide in 52 major U.S. cities, including Phoenix, Los Angeles and Newark, New Jersey. It found that low-income neighborhoods and communities of color experience an average of 28 percent more nitrogen dioxide pollution than higher-income and majority-white neighborhoods.

Nitrogen oxides—including nitrogen dioxide, or NO2—are emitted by freight trucks, school buses and other heavy-duty vehicles with diesel engines, and they’re associated with elevated levels of premature death, as well as cardiovascular and lung disease, according to the Environmental Protection Agency. Burning diesel—or any fossil fuel—also emits particulate matter pollution, which has also been linked to an increase in health issues, as well as higher death rates for Covid-19.

That air quality disparity exists, in part, because of historically racist practices such as redlining and the placement of the nation’s highways, which often cut through Black and Brown neighborhoods that didn’t have the political or financial power to stop the projects.

But the study also found that vehicles that run on diesel play an outsized role in the NO2 pollution in those neighborhoods because of their proximity to trucking routes on main U.S. thoroughfares. Diesel trucks are the dominant source of NO2 emissions in the cities examined by the study, contributing on average up to half of the overall NO2 pollution despite being just 5 percent or less of the total traffic.

Targeting heavy-duty fleets and other vehicles that run on diesel could be a powerful way for policymakers to reduce the air pollution disparities that persist across the country, ­­­said Sally Ellen, one of the study’s authors. In fact, she said, their research found that a 60 percent reduction in diesel-related pollution led to an automatic 40 percent drop in “air pollution inequality”—meaning historically disadvantaged communities saw a greater benefit from the improvement of air quality.

The University of Virginia researchers were able to study the drop in diesel emissions because of a natural dip in commercial traffic on weekends, when many freight drivers are off duty.

“For me, it’s a great study because it does get further evidence of diesel traffic being this dominant source of disparities,” said Regan Patterson, a transportation and public health expert at the Congressional Black Caucus Foundation. “We now have the data to support what communities have been saying for a long time.”

Patterson was a co-author of a study based on research she did as a graduate student at the University of California, Berkeley, that was published this summer and also found that targeting diesel emissions could be an effective way to reduce air pollution disparities. That study modeled how California’s early adoption of newer emissions control technologies for diesel vehicles could affect the communities that live closest to some of the state’s major truck routes, by comparing a more affluent area with a low-income one with a higher percentage of people of color.

While both regions saw a drop in air pollution related to diesel emissions, the lower-income neighborhoods saw a larger reduction in the pollution levels than the affluent one.

The authors of the studies say their findings suggest some policies might be more effective in reducing disparities than others and could help policymakers prioritize in making plans. Local officials could accelerate efforts to electrify heavy-duty trucks or buses, for example, in comparison to light-duty or passenger vehicles. Many cities and states have pledged to electrify their fleets in the coming decades, but heavy-duty vehicles are often slated to be electrified several years after light-duty vehicles.

“It really supports the need to electrify our diesel trucks,” Patterson said, “and also to think about our transportation as a whole.”

States could also adopt stricter auto emissions standards, particularly when it comes to heavy-duty vehicles. In August, the Biden administration announced new proposed rules to reduce greenhouse gas emissions and other harmful pollutants from heavy-duty trucks. Under one of those rules, new heavy-duty vehicles sold anywhere in the country will need to meet stricter emission standards starting in 2027.

Some states, like California and New York, have already proposed standards that start sooner or go beyond what’s required under the upcoming federal regulation. A proposed California rule, expected to be finalized later this year, aims to reduce the state’s current nitrogen oxide emissions by 90 percent by 2027. New York Gov. Kathy Hochul signed a new law in August that requires all sales of new heavy-duty trucks to reach zero emissions by 2045.

But despite the promising findings from the recent studies, Patterson said, it’s still important to note that no single policy will solve the air pollution disparities the country faces, and lawmakers have a lot of work left to do.

“Because of these historic inequities, you still get people who are disproportionately exposed, in spite of these regulations and these controls,” Patterson said. “So, until we address that, these root causes of inequities, you’re going to get these persisting disparities.”