The Digital Rights group Fight for the Future, a posse of internet activists currently campaigning against an international trade deal they say would give officials too much power to censor online content, brought its message to Capitol Hill Monday. 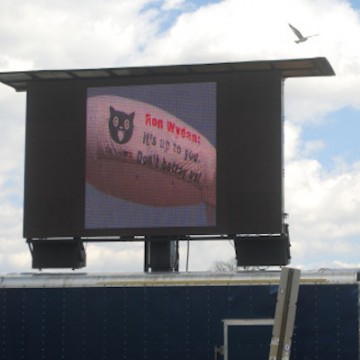 Fight for the Future parked a truck adorned with a Jumbotron on Capitol Hill for an impromptu “film festival” as part of the group’s ongoing campaign to pressure Oregon Senator Ron Wyden to drop legislation that would fast track the multi-national Trans-Pacific Partnership. The trade deal between countries in Asia, Australia and the Americas would boost U.S. trade, but activists fear it would jeopardize transparency due to issues of internet censorship.

“Senator Wyden has built his career on a platform of government transparency and support for Internet freedom,” Fight for the Future campaign director Evan Greer said.

“If he turns his back on those values by supporting outdated and anti-democratic Fast Track legislation, his legacy will be forever tarnished,” Greer said.

The “Film Festival” featured a video documenting another organized protest to pressure Wyden against the fast track legislation — activists tailed Wyden on tour around Oregon with a 30-foot blimp.

Wyden has been the recipient of more than 35,000 Tweets, and thousands of phone calls and emails, according to Fight for the Future.

“The film festival today was just one more reminder that the public is outraged that he’s even considering this deal, and if he cares about what his constituents have to say at all he will do the right thing,” Greer said.

Fight for the Future is funding the action through its 1.2 million members.