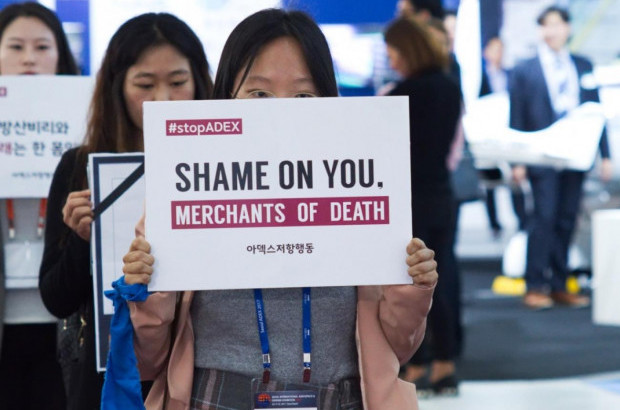 Above Photo: A woman holds a sign reading “Shame on you” inside the ADEX arms fair

In October, groups in New Zealand and South Korea have taken direct action against arms fairs and weapons expos taking place in their Auckland and Seoul.

In New Zealand, Peace Action Wellington organised groups from across New Zealand to resist the annual New Zealand Defence Industry Association’s (NZDIA) “weapons expo”. From 7am on 10th October, around 200 people were onsite to protest the event, with the entrances to the Westpac Stadium blocked by protesters sat in the roads and hanging from banners.

Jessie Dennis, a spokesperson for Peace Action Wellington said: “We’re here to stay. We think it’s totally unethical that New Zealand plays host to a Weapons Expo, and we’re not leaving until the weapons dealers do. The Weapons Expo is a trade fair for some of the biggest arms companies in the world. The delegates attending would have us believe that the products on sale and the deals being done at the Expo are somehow benign. But make no mistake, these are weapons and military hardware that play their part in the global war machine.”

In Seoul, South Korea, activists from World Without War have directly disrupted the ADEX arms fair. Activists occupied a VIP reception event, throwing “blood money”, holding banners, and chanting, before being removed by security. During the fair itself, activists performed a piece of protest theatre in front of the Lockheed Martin stand, and held banners and signs. World Without War also held public seminars and gave out publicity material outside the arms fair to passersby.