Note: VCNV is not a faith-based or sectarian organization, nor are we aligned with any particular political ideology or party. We are united in our active, nonviolent resistance to war, both economic and military, at home and abroad.

Due to the approach of Hurricane Florence, today marked the end of the Disarm Trident Peace Walk. Some 50 people in all took part in the walk from Savannah to Kings Bay, Georgia, in support of the 7 Catholic peace activists of the Kings Bay Plowshares. 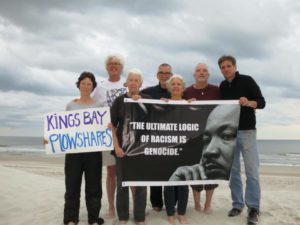 On April 4th, the 50th anniversary of the assassination of Dr. Martin Luther King Jr., the seven entered Naval Station Kings Bay, home to six Trident ballistic missile submarines. Each Trident can carry the explosive power of some 1825 Hiroshima-sized atomic bombs—if they are ever used it will mean the end of the world. The activists carried hammers and bottles of their own blood into the base to “beat swords into plowshares,” as the Hebrew Prophets envisioned. Finding no subs in port, they poured blood on the base logo, hammered on a concrete model of a Trident D5 missile, crisscrossed the administration building with yellow crime scene tape, and hung banners on the fence surrounding the nuclear weapons bunkers reading “The Ultimate Logic of Racism is Genocide~MLK” and “The Ultimate Logic of Trident is Omnicide.” Two of the activists remain in the Glynn County Detention Center and five are out on house arrest. All await a hearing on their motion to argue the Religious Freedom Restoration Act in their defense, and then a trial date. 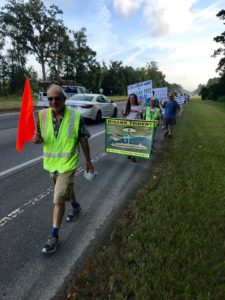 Organized by Voices for Creative Nonviolence and friends, the peace walk began in the rain at Forsythe Park in Savannah and continued for eight more days down coastal Georgia route 17. We hoped to walk all 126 miles to Kings Bay, but Florence had other plans and two days were shaved off. It ended this morning with a short walk and a two hour vigil calling for nuclear disarmament at the main gate to the sub base.

Most of the walk was through the rural coastal Georgia landscape which seeped into my bones as I walked through it mile after mile after mile—the ancient live oaks and the loblolly pines, the grasses and reeds and tannic colored water in the swamps and wetlands, the egrets quietly hunting or startled and taking wing, the ubiquitous Spanish moss cloaking the area in mystery. In several places wide, lazy rivers spanned by old concrete bridges seemed timeless, and huge, vertical, billowing clouds plastered the sky between us and the unseen ocean to the east made it feel like we were walking inside a giant oil painting.

Amid the hauntingly beautiful landscape were markers hinting at the area’s history. The matter of fact descriptions of prominent land holding families, governorships, military positions held, shipping facilities and rice, indigo, and cotton plantations, largely ignored the blood, sweat, and tears of enslaved blacks that soaked the land we trod. We were glad to be educated near Midway, Georgia by a Gullah Gee Chee descendent at a small DIY slavery museum as well as by a couple of local activists. 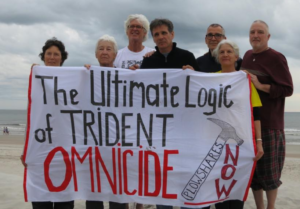 Our walking days included the 9th of September, the 38th anniversary of the first Plowshares action. Of the eight people who acted at the General Electric plant in King of Prussia, PA, which built nose cones for nuclear warheads, most were Catholic. The Kings Bay Plowshares community is all Catholic; Liz McAllister (long of Jonah House), Jesuit Fr. Steve Kelly, and Catholic Workers Martha Hennessy (a granddaughter of Dorothy Day), Mark Colville, Clare Grady, Patrick O’Neill, and Carmen Trotta.

This is especially poignant as the Holy See was one of only three United Nations members to sign and ratify the Treaty on the Prohibition of Nuclear Weapons on the very first day it was open for ratification, last September 20th. Then in November, Pope Francis declared that the possession or the threat of use of nuclear weapons was to be “firmly condemned,” signaling the end of the road for the Catholic Church’s sanction of nuclear deterrence and the existence of nuclear weapons.

Unfortunately, all of the nuclear weapons states boycotted the Treaty negotiations, and in the United States, politicians, the media, as well as the Church are completely silent about it. So, the message of the Plowshares movement continues to move through the land—if governments won’t disarm, the people must. Molly Rush, one of the original Plowshares 8, later wrote that as she hammered on the warhead nose cone she “put a hole in one and a dent in another. And, I thought, these things are as vulnerable as we are, and we can undo what has been done.”

This is the faith of the Kings Bay Plowshares and the hope of those of us who walked the Georgia coast up to this morning.