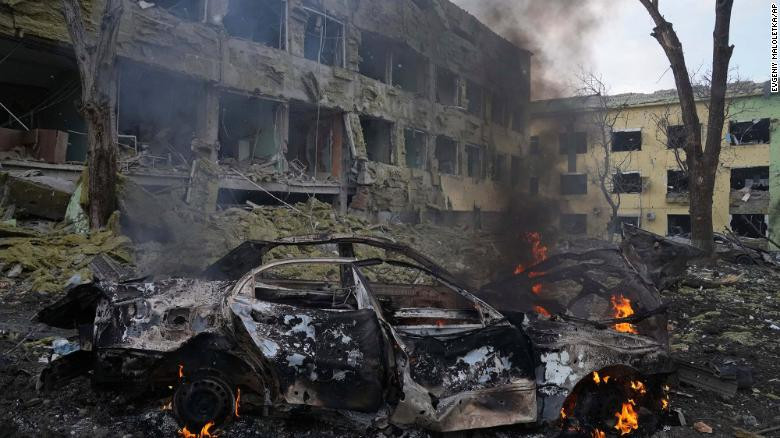 Russian forces bombed a maternity and children’s hospital in southern Ukraine, authorities there said Wednesday, an attack described by the country’s President Volodymyr Zelensky as an “atrocity.”

Zelensky repeated his call for the NATO military alliance to declare a no-fly zone over Ukraine, as he expressed his outrage at the attack.

This is curious. The three story building is quite large with more than a hundred rooms.

Pictures show that all windows have been destroyed by a huge pressure wave. If there had been people in the building many would be dead and all would likely have cuts from glass and other debris flying around.

How come that there were allegedly only 17 people injured?

The video taken shortly after the incident (there is still daylight) and published by CNN shortly thereafter shows the completely destroyed interior of the hospital but no casualties and no traces of blood on the floors. The still pictures published with the CNN report show only one man in uniform who has some blood on his face. Other persons in the pictures have no visible signs of wounds.

A day before a news piece in the Russian magazine Lenta.ru published on March 8 at 00:01 local time (March 7 21:01 UTC) had mentioned the hospital. (The piece was fetched by archive.org on March 7 22:09 UTC.) It is a report from a Lenta.ru reporter in Donbas who interviewed refugees arriving from Mariupol. Here is a machine translated excerpt:

The correspondent of Lenta.ru visited the village of Bezymennoye in the south of the DPR, where residents of Mariupol fleeing the hostilities arrive, and talked with those who managed to leave the city….Some of the residents of the villages adjacent to Mariupol managed to get to the territory controlled by the DPR without any problems. But not everyone is so lucky, and everyone has their own story….During the first day of the humanitarian corridor’s operation, only 52 people left Mariupol (and about 200,000 were expected). There are always human tragedies behind the numbers.

A man walks by the tents where refugees are taken. He is on edge and does not let go of the phone, his face shows that he has not been without sleep for several days. His name is Igor, he spent about a day on the road to get to Bezymennoye from the Crimea. He constantly approaches the military, employees of the Ministry of Emergency Situations, asking to see the lists to find out if his elderly parents were able to evacuate from Mariupol. He is trying to go along with the soldiers towards the front line, closer to the city.

Igor said that in the last days of February, people in uniform came to the maternity hospital where his mother works. He does not know whether they were fighters of the Armed Forces of Ukraine or the nationalist battalion “Azov” (banned in the Russian Federation). The military knocked down all the locks, dispersed the staff of the maternity hospital, and set up firing points in the building in order, as they explained to the doctors, to prepare the “fortress of Mariupol” for defense. The reaction of the military to objections is standard: blows with rifle butts, shooting into the air.

On March 7 (UTC-5) the permanent mission of the Russian Federation to the UN published a statement by its Permanent Representative Vassily Nebenzia had made at a UNSC briefing on the humanitarian situation in Ukraine. The briefing had been scheduled for March 7 3:00 pm local time (March 7 20:00 UTC). (The statement was fetched by archive.org on March 8 at 2:12 UTC.)

The statement says among other things:

By our records, 200 thousand civilians are trapped in Mariupol alone and held at gunpoint by the Azov battalion. The humanitarian situation in cities deteriorates rapidly. As for humanitarians who are ready to help, they cannot get in there and prevent the unfolding disaster. People in other regions of Ukraine that have been blocked by nationalist battalions find themselves in the same desperate situation.

Ukrainian radicals show their true face more distinctly by the day. Locals reports that Ukraine’s Armed Forces kicked out personnel of natal hospital #1 of the city of Mariupol and set up a firing site within the facility. Besides, they fully destroyed one of the city’s kindergartens.

We have these records:

I leave it for readers to decide what really has happened here.