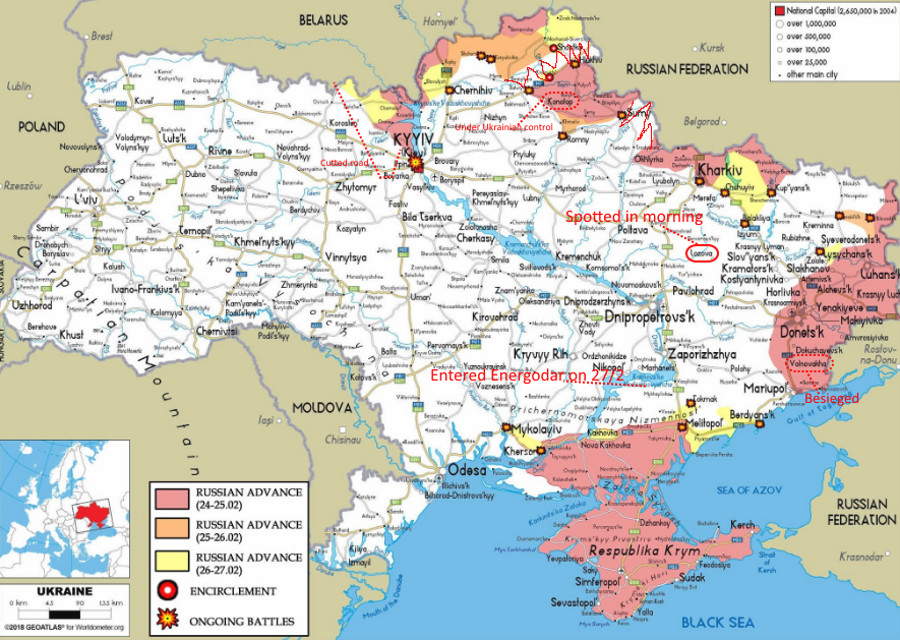 As an example I offer you yesterday’s Policy statement by Olaf Scholz, Chancellor of the Federal Republic of Germany

The above are what you hear and see in current ‘western’ news. It is not reality.

The U.S. and its proxies in the EU and elsewhere have put up very harsh sanctions on Russia to damage its economy.

The final intent of this economic war is regime change in Russia.

The likely consequence will be regime change in many other countries.

This war is waged at a financial size that is unprecedented. The consequences in all markets will be very significant to extreme. But experience from Iran shows that such financial wars have their limits as the targeted country learns to survive. Moreover Russia is in a much stronger position than Iran ever was and is better prepared for the consequences.

The rubel fell some 30% today but Russia’s central bank immediately more than doubled its interest rate to 20%. It is willing to fight inflation before it is really sets in. How much of Russia’s investment and consumption depends on imports from the ‘west’? Can’t most of it not be replaced by imports from China?

All energy consumption in the U.S. and EU will now come at a premium price. This will push the EU and the U.S. into a recession. As Russia will increase the prices for exports of goods in which it has market power – gas, oil, wheat, potassium, titanium, aluminum, palladium, neon etc – the rise in inflation all around the world will become significant.

‘Western’ central banks are still at practical 0% interest rates and will be reluctant to increase those as that will cause a deeper recession. This makes it likely that inflation in the ‘western’ world will increase at a higher rate than Russia’s.

Germany’s crazy move to add $120 billion to defense spending (up from some $40 billion p.a.) will within a few years create a strong military imbalance in Europe as Germany will then dominate all its neighbors. This is unnecessary and historically very dangerous. The shunning of economic relations with Russia and China means that Germany and its newbie chancellor Olaf Scholz have fallen for the U.S. scheme of creating a new Cold War. Germany’s economy will now become one of its victims.

On February 4 Russia and China declared a multipolar world in which they are two partnering poles that will counter the American one. Russia’s move into the Ukraine is a demonstration of that.

It also shows that the U.S. is unwilling to give up its supremacist urges without a large fight. But while the U.S. over the last 20 years has spent its money to mess up the Middle East, Russia and China have used the time to prepare for the larger conflict. They have spent more brain time on the issue than the U.S. has.

The Europeans should have acknowledged that instead of helping the U.S. to keep up its self-image of a unipolar power.

It will take some time for the new economic realities to settle in. They will likely change the current view of Europe’s real strategic interests.

This map shows the ground taken by Russian military over the first days.

This map shows the likely current intent of the Russian forces. 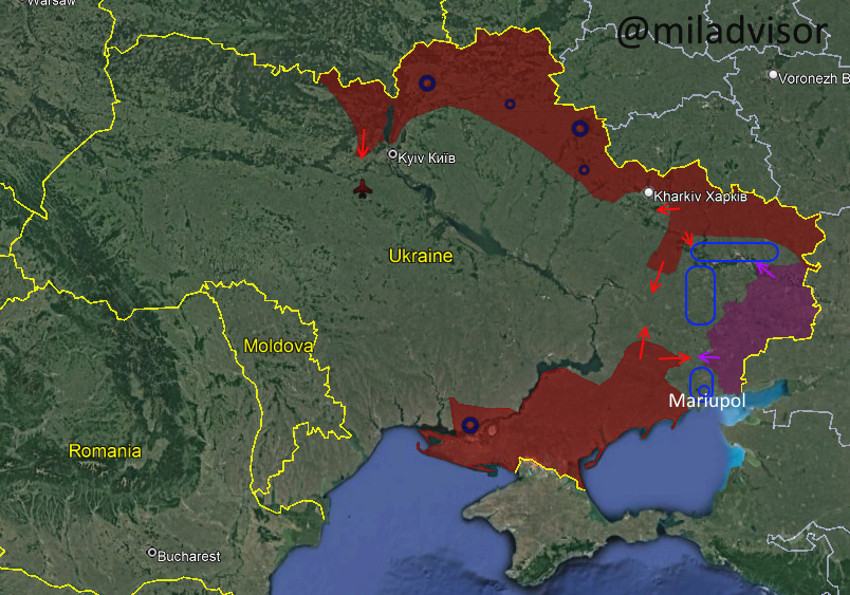