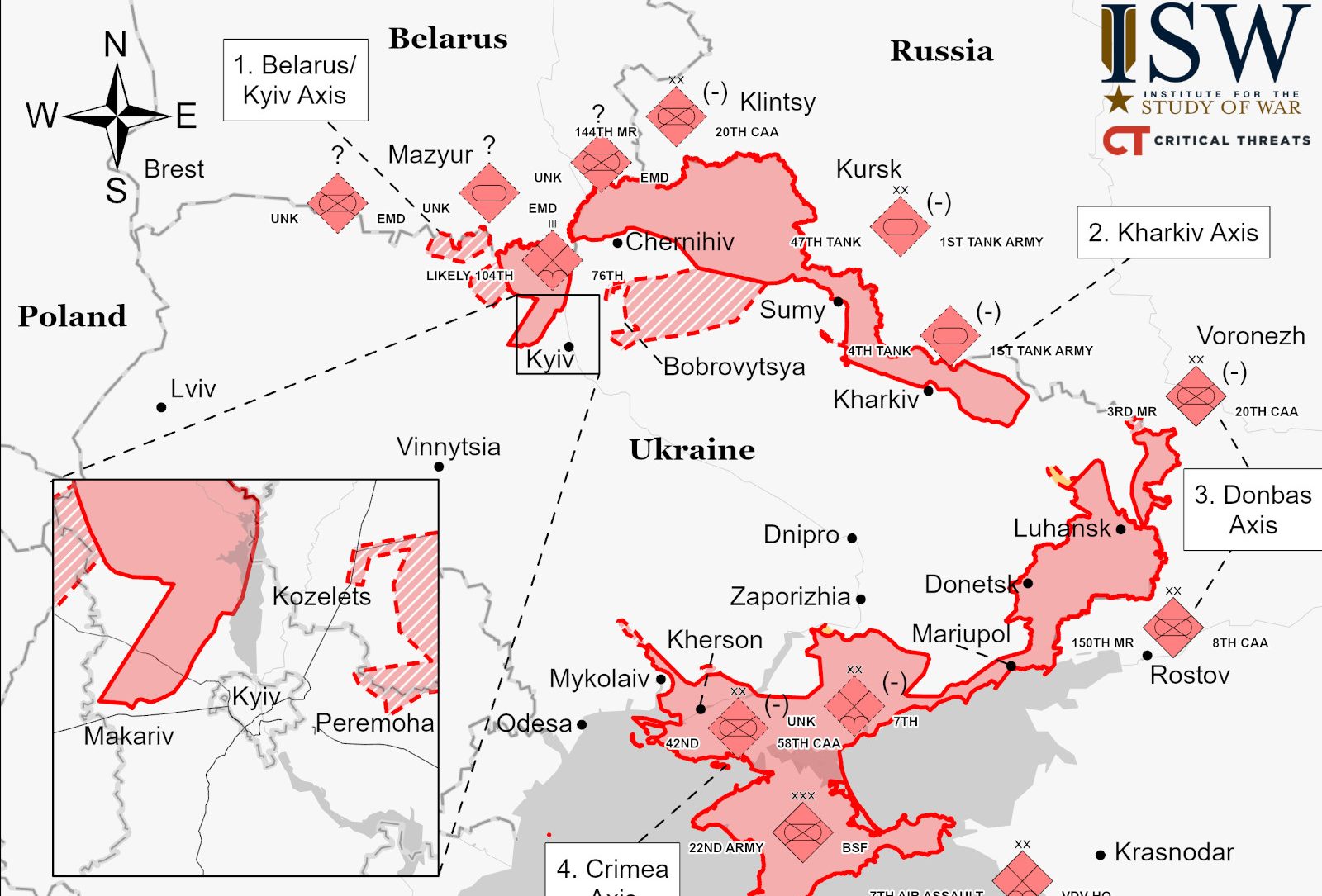 I feel too outraged and frightened about what is now happening in our societies to write about it. I thus continue to quote others at some length.

Patrick Armstrong continues to be the best military intelligence analyst on Russia:

So far the Russian military operation in Ukraine has been a reconnaissance in force preceded by the destruction of the supplies and headquarters of the Ukrainian Armed Forces by standoff weapons. The object being to suss out where the Ukrainian forces are, to surround them, to check existing Russian intelligence against reality and, at the same time, destroy known headquarters, air and naval assets, supplies and ammunition depots. And, perhaps, there was the hope that the speed and success (Russian/LDPR forces dominated an area of Ukraine about the size of the United Kingdom in the first week) would force an early end (aka recognition of reality).

At the moment they are readying for the next phase. The long column that so obsessed the “experts” on CNN is the preparation for the next phase….As far as I can see they’ve created three cauldrons (encirclements). Probably the most important one is the one around Mariupol where the main concentration of Azov, the principal nazi force, is. Another is being established around the main concentration of the Ukrainian Armed Forces facing LDPR. And there appears to be another developing to the east of Kiev. A super cauldron of all three is visible. The nazis will be exterminated; the ordinary Ukrainian soldier will be allowed to go home. The nightmare question is how many ordinary Ukrainians will be free to choose. 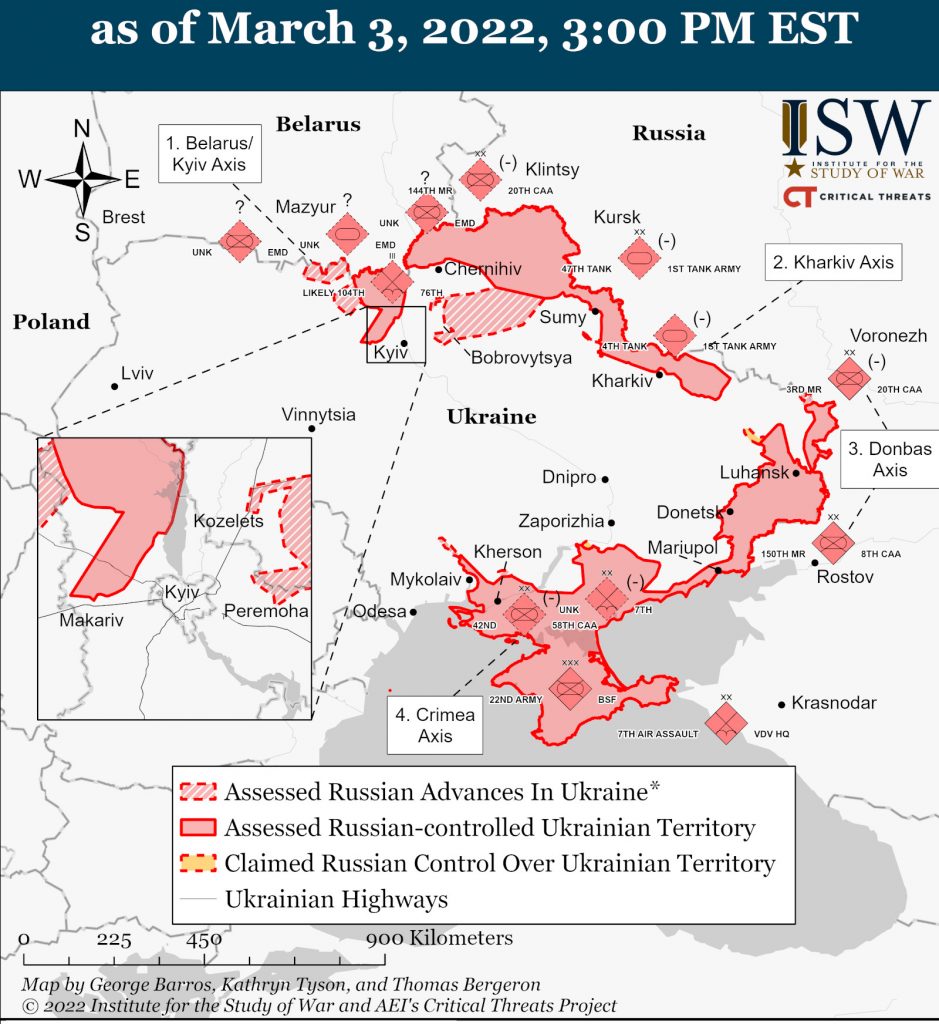 Putin is NOT crazy and the Russian invasion is NOT failing. The West’s delusions about this war – and its failure to understand the enemy – will prevent it from saving Ukraine, writes military analyst BILL ROGGIO

M.K. Bhadrakumar points out that the now beginning larger war is part of a millennium old conflict within the Christian believe:

At the core is the feud among Christians that began with the Great Schism of 1054 when the main church at that time, based in Rome, split into two divisions, Roman Catholic and Eastern Orthodox. They’ve since come to be the two largest denominations of Christianity.

The Euro-Atlantic leaders will shy away from admitting that this ancient feud all along complicated Russia’s inclusion in any common European home — just as the European Union, a Christian club, will never admit Turkey as a member.

The feud within Christianity began intensifying in the recent decade or two with Russia’s resurgence under Putin’s leadership, when Russian Orthodox Church entered a golden era of state patronage….The Ukraine crisis cannot be understood unless we factor in the swirling primeval passions behind the desperate attempt by Euro-Atlantic countries to attack Putin and weaken Russia and, if possible dismember it, like they did to former Yugoslavia, another Slavic country of Eastern Orthodoxy.

It is no accident that two sentinels of Roman Catholicism, France and Poland, and that gladiator of Protestantism, Germany, are at the barricades of the contestation over Ukraine. This is reminiscent of the Crusade to conquer pagan areas in the Middle East and recapture formerly Christian territories.

Bhadrakumar does not mention that the different flavors of Christianity are also exactly what has caused the problems within the Ukraine. 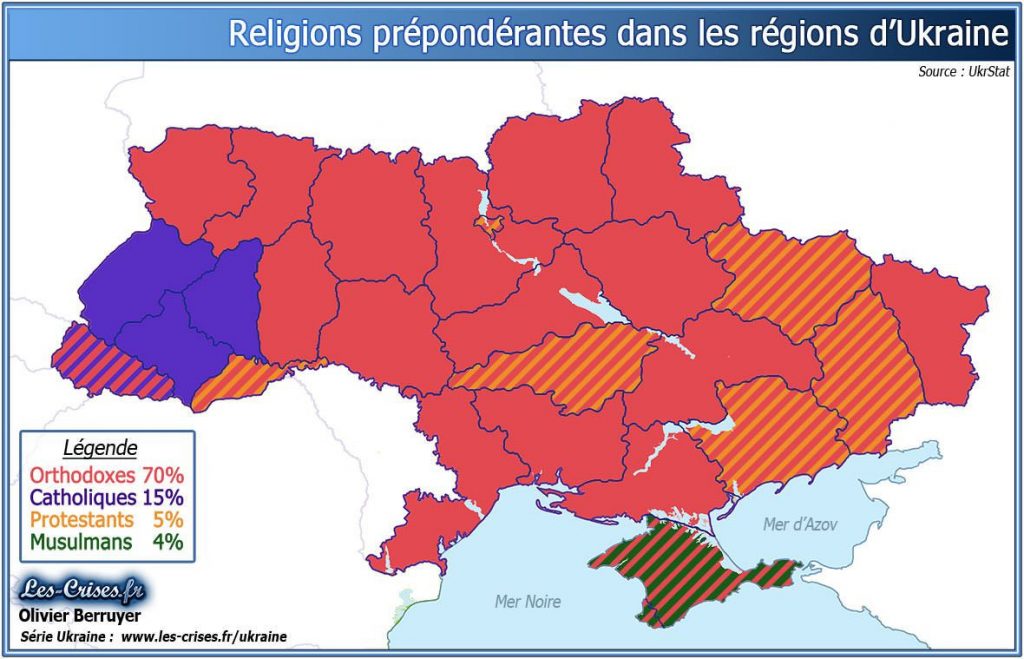 The parts of Poland and Romania that were attached to the Ukraine after World War II are predominantly catholic. These are also the parts where core members of the Ukraine fascist ‘ultranationalists’ are coming from.

Whitney Webb writes that the CIA is creating a new al-Qaeda. This time as a white supremacist rightwing militia. A part of these are mercenaries currently getting recruited by western ‘security’ companies. These militia will use all the ‘small’ weapons NATO countries are now delivering to the Ukraine to attack Russian troops and their supporters.

This will have serious backlashes in Poland and Romania from where these troops get deployed. In the longer run it will lead to rightwing terror coming back to those countries who are now supporting these forces. It will also help the longterm trend of rightwing parties increasing their share of votes.

Together with the economic devastation that U.S. and European sanctions on Russia are causing in their own economies this will end in regime-changes in several European countries. The U.S. is of course again protecting itself from as much as it can at the cost of others. 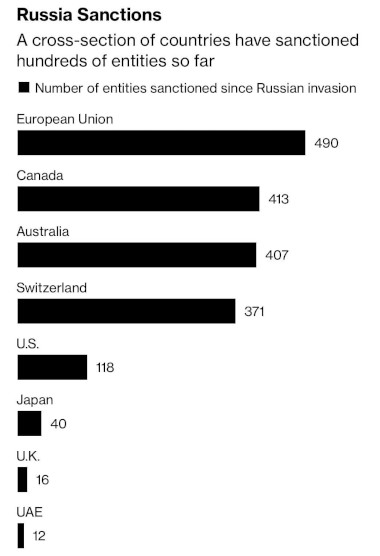 The question remains, why did all those who for so long foretold this war do so little to stop it, and so much to hasten the disaster Russia has now set in motion?

Indeed. Why didn’t the government of Germany guarantee in writing that it would veto any additional NATO membership? It would have solved at least half of the problem. Why didn’t any other NATO government do so?

And what are they doing now? Where are their initiatives for peace?

It is over. The Ukraine is gone. Russia has won.

Energy and wheat prices have doubled. With inciting a longer fight Europe only increases its own loses.