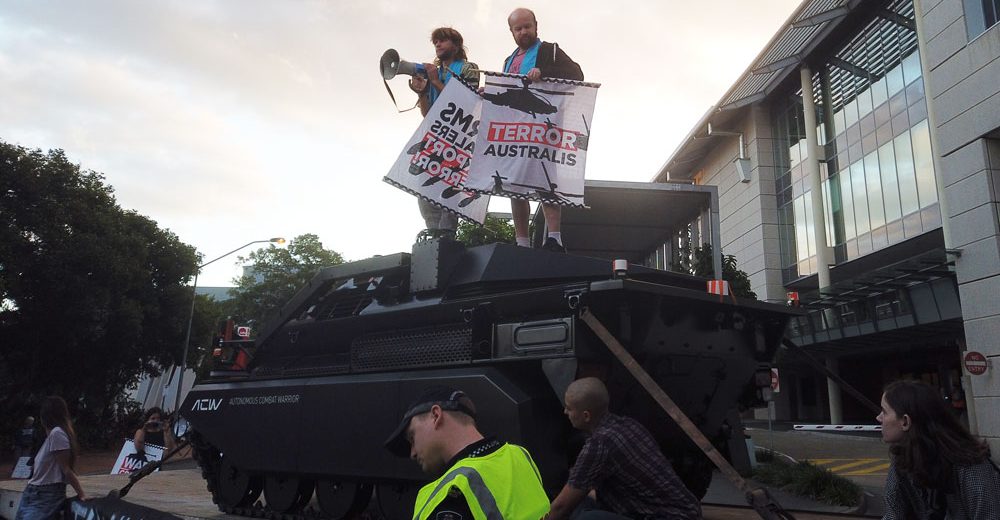 Australia – It was Thursday afternoon peak hour in South Brisbane, soundtracked as usual by trucks rumbling down the busy thoroughfares of the area. But these were not the usual trucks, and the response to them was not the customary indifference we give to our surroundings on busy city streets.

Two trucks began to pull into the Brisbane Convention Centre. On the trailer of each were small military vehicles. One was an “Autonomous Combat Warrior” made by Rheinmetall. The company describes the vehicle as the “next generation of land vehicle systems warfighting capability”. Essentially it’s a giant remote controlled car with off-road wheels and guns. The trucks were headed for the Land Forces Defence Exposition, an arms industry sales event which will take place from June 1-3. There over 300 stallholders will “showcase equipment, technology and services for the armies of Australia and the Indo-Asia-Pacific.”

Greg Rolles and Jarrah Kershaw were near the Convention Centre when they spotted the trucks rolling in. They were in South Brisbane preparing for the counter-event Disrupt Land Forces – a week long festival of resistance organised in response to the sales expo. They weren’t exactly expecting the military vehicles, but with a mixture of good fortune, flexibility and good preparation they were able to respond.

Greg jumped in front of the convoy while Jarrah called for reinforcements. Before long a group had gathered around them in Glenelg Street. Two others joined them on top of the trucks, refusing to come down.

Banners were unfurled. From the serious tones of “War Crimes Start Here” and “Terror Australis” to the more jovial “Thanks But No Tanks”. Similarly, a bit of shouting about death and destruction was mixed with a bit of dancing and humourous chants. More people kept arriving. Before long there was over a hundred people surrounding the vehicles. Police turned up and shut down the street. But it was hours before a fire engine arrived to facilitate arrests – hours of jubilant blockading, hours of disrupting the Land Forces’ preparations.

First weapons attempted to be moved into Land Forces weapons convention, first disruptions to it! Two armed vehicles were stopped outside the Convention Centre for over 4 hours tonight. pic.twitter.com/ikfXf7F5jM

By the time police finally removed the blockaders, news cameras had arrived too. As is their custom, they made a big deal about the “violence” of protesters having to be forcibly removed, while saying nothing of the deadly weapons right before their eyes. “It’s a non-combat vehicle for training purposes” said the truck driver to one news channel, speaking of his load that literally had “Autonomous Combat Warrior” printed on the side of it.

This is the mundane evil of the weapons industry – existing always in the background, obscured by a web of jargon and euphemisms. Every day, new more efficient ways of killing are developed. Weapons sales and research funding suck taxpayers’ money out of underfunded social services – $44 billion a year of military spending, encouraged by a never-ending stream of defence industry lobbyists and thinktanks assuring the vitality of each new product. Weapons made in Australian factories are sold to warzones – to Saudi Arabia for bombing Yemeni civilians, to Indonesia for crushing the West Papuan independence movement and enforcing the ongoing theft of their land for resource extraction.

Even in peace time, the weapons industry is everywhere. They are in our suburbs, manufacturing and distributing products designed to kill. They are in our schools and universities, offering teacher resources and tours of their facilities to enculturate bright young minds. They are in the ears of our politicians, whispering threats about the inevitability of war with our number one trade partner. Every few years they appear in the middle of a major city for a showcase like Land Forces. Most of the time, they manage to do it all without anybody pointing out their presence or their practical cost in money, lives, trauma, wasted human potential.

But not this time. As stationary trucks sat waiting for police in a cherry picker to extract the blockaders, it became clear to everyone that this week the weapons industry was not going to be able to conduct their business deals and networking chats without anybody kicking up a fuss. It was still almost a week before Land Forces officially opened, but the disruption has already begun.