Above Photo: Surveillance video captures protesters breaking windows of Starbucks and Bank of America. From dcmediagroup.us 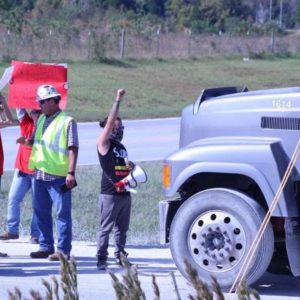 Dane Powell was sentenced to a prison term by a DC Superior Court judge.

A judge sentenced a man who broke windows and threw rocks at police officers during Inauguration Day protests to 36 months in prison for each of two counts, all but 4 months suspended. Dane Powell, 31, who participated in an “anti-fascist march” on January 20, accepted a government deal in late April in which he pleaded guilty to two charges, felony rioting and felony assault on police officers. In addition to the prison sentence, DC Superior Court Judge Lynn Leibovitz imposed two years supervised probation and three years supervised release.

Powell was among over two hundred people arrested related to #DisruptJ20 protests on the day of President Trump’s inauguration in downtown Washington, DC. Most of those arrested and charged that day, including journalists and bystanders, were indiscriminately rounded up by police. Powell, however, was arrested the following day after he was identified by police standing outside the courthouse while waiting for other protesters to be released.

In January, he was charged with six offenses, including three counts of assault on a police officer, destruction of property and felony rioting. In April, he was hit with additional charges in a superseding indictment, including conspiracy to riot. The seriousness of the charges could have resulted in decades in prison. Powell accepted a plea deal on April 28.

His admission of guilt and being the first of the inauguration day protesters to enter into a plea deal weighed heavily in her sentencing decision, Judge Leibovitz said. She granted the prosecution’s requested length of prison sentenced and reduced the length of the requested suspended sentence by two months. The sentence would be served concurrently if he violates the conditions of his suspension.

The government attorney called Powell “a violent coward” who committed “senseless acts.” The government didn’t wish to prosecute Powell for exercising free speech rights or wearing black, she said, but his right to dissent doesn’t include infringing on the rights of others or harming them.

A video presented by the prosecution showed Powell breaking windows of a Bank of America branch and Starbucks at while customers huddled under tables. Video also proved, they said, that Powell broke the window of the McDonald’s at New York Ave. and 13th St. It showed him throwing rocks in the direction of police. (Six police officers were injured, one of them was taken to the hospital.) The government admitted that it could not prove that Powell hit a police officer, only that he was proximate to police officers who were injured at the time he was throwing projectiles.

In contrast, Powell’s attorneys depicted him as a veteran who served his country, a committed activist, and a caring father and friend. A video highlighted his 9-year military service in the Army, his parenting of two daughters, his community service in feeding the homeless, and political activism in defending indigenous rights and migrants in Florida.

Defense attorney Ashley Jones read aloud a letter in support of Powell from Greensboro, N.C., resident Gwen Frisby-Fulton. Her ten-year-old son was terrified as police doused people with pepper spray and tear gas. While most were running away, Powell came to her son’s aid, picked him up and carried him while calling for a medic. (Video.)

“I apologize to those I hurt, scared, or affected,” Powell said in a short statement. “I ask for leniency.”

While some protesters have pleaded out their charges, Powell was the first #ResistJ20 protester to be sentenced to prison. But for many, he isn’t the one who should be on trial—the police are.

Police are accused of kettling protesters, a prohibited practice, for which the District has been sued for millions of dollars in the past. Once people were rounded up, detainees were forced to stand on the street for hours without bathrooms, water or food, then had their hands tightly zip-tied, were shoved into police wagons and were again made to wait–something known as “hotboxing.” Metropolitan Police were joined on the streets by other forces brought in specifically for inauguration day. They unleashed a storm of tear gas and pepper spray on protesters and bystanders.

“The way the cops were behaving was completely uncalled for. They were indiscriminately attacking and pepper spraying anyone who happened to be in the area including elderly people, disabled people, and children,” said one defendant who wished to remain anonymous. “Dane is seen in the video coming to the rescue of a child who had just been pepper sprayed by the cops. Now Dane is facing jail time, and the cops are getting away scot-free.”

The punitive charges have a chilling effect, and they also are a drain on activists and their support systems. “The stress and anxiety of having these outrageous charges hanging over your head can really affect your mental health,” he continued. “I completely understand why people would take plea deals.”

“That’s something where our police chief [Peter Newsham] has a bad history with this, and yet somehow he’s become our police chief,” said Sammi LeMaster of ResistThis, an organization formed out of #ResistJ20. “It’s not just about the people that we’re in the street that day, but about the fear that someone may not go out to a protest because they’re worried that they’re going to get swept up in one of these things.”

Worst of all are allegations made in a recently filed lawsuit of sexual abuse at the police station, where officers sadistically humiliated detainees and molested them. Victims claim police were bent on inflicting punishment for their protest activities.

“We live in a world where a cop murdered Philando Castile and got clean away with it, and it has happened in so many cases of police murder, shooting with a gun purposefully of a black man,” said #ResistJ20 organizer Legba Carrefour. “And then a man is now put in prison for four months for the crime of breaking windows.”

Standing Up to Political Repression

The National Lawyer’s Guild, among others, has condemned the punitive charges pursued by U.S. Attorney Channing Phillips as “politically motivated.” The punitive measures, the technical sophistication and meticulous preparation of the U.S. Attorney’s office in its prosecution demonstrates how much time and resources it is willing to put into paralyzing dissent.  Many defendants and civil rights advocates are sounding the alarm.

“I think state repression is fascism. We need to engage the resistance against police repression and it is what we’re doing,” said Legba Carrefour. “We saw that in Standing Rock. There’s 800 people facing felony charges in Standing Rock. There’s 230 here. There’s people that have been arrested for felony charges for blocking the highway for Black Lives Matter. I expect it to continue, and it’s not good, but I think people are going to resist to make things better in the long run, and we are going to win.”