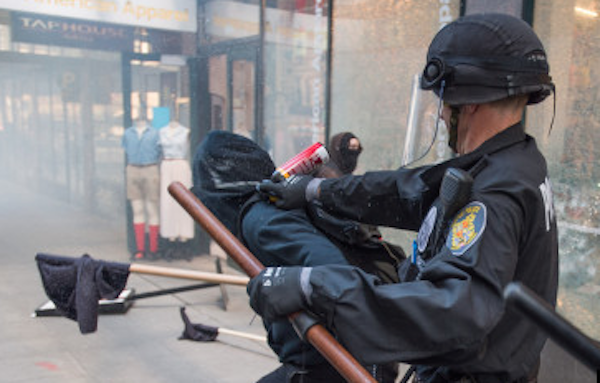 A Seattle police officer scuffles with a protester during an Occupy Seattle May Day rally on Tuesday, May 1, 2012. (Stuart Isett/Bloomberg via Getty Images)

On Thursday, the Justice Department released the results of a 20-month investigationinto the use of force by Cleveland police. The review was unequivocally damning, finding the department responsible for an alarming pattern of excessive and sometimes deadly force, as well as other forms of misconduct and a general failure among supervisors to respond to this behavior.

Cleveland — where a police officer recently shot and killed Tamir Rice, a 12-year-old black child who was holding a toy gun — is only the latest city to have its police force subject to DOJ scrutiny following allegations of chronic misconduct. In the months and years leading up to the Cleveland investigation, the city’s police were responsible for a number of highly publicized incidents involving alleged brutality. In particular, the DOJ report notes a 2012 incident in which a prolonged police chase involving 62 cars ended with Cleveland officers firing 132 rounds into a car containing two unarmed suspects. The suspects, both black, died after each suffering more than 20 gunshot wounds.

The Justice Department doesn’t bring a case against state or local police unless it has reason to believe officers are systematically depriving citizens of their rights — which means reviews are often compelled by particularly egregious allegations of law enforcement violations, or at the request of an official or a group that has collected complaints from the community. This process has been used to investigate dozens of police departments across the nation. Only a handful of these reviews have focused on cities, but when they have, they’ve found disturbing parallels regarding the widespread use of excessive force by police. The fact that it often takes a highly publicized tragedy for the Justice Department to get involved raises questions about just how pervasive this issue is in cities across the United States, given that such incidents may not always receive national attention.

Below are excerpts from the reviews of five city police forces investigated by the Justice Department. The details found in the complete reports are far more unsettling.

Following a string of controversial Taser incidents and officer-involved shootings, including 25 shootings in a two-year period between 2010 and 2012, the Justice Department stepped in to investigate the Albuquerque Police Department. Earlier this year, they released the results of their review, which covered four years of incidents in the city. Here’s a synopsis of what the DOJ found.

We have reasonable cause to believe that officers of the Albuquerque Police Department engage in a pattern or practice of use of excessive force, including unreasonable deadly force, in violation of the Fourth Amendment and Section 14141 [of the U.S. Code]. A significant amount of the force we reviewed was used against persons with mental illness and in crisis. APD’s policies, training, and supervision are insufficient to ensure that officers encountering people with mental illness or in distress do so in a manner that is safe and respects their rights. The use of excessive force by APD officers is not isolated or sporadic. The pattern or practice of excessive force stems from systemic deficiencies in oversight, training, and policy. Chief among these deficiencies is the department’s failure to implement an objective and rigorous internal accountability system. Force incidents are not properly investigated, documented, or addressed with corrective measures. Other deficiencies relate to the department’s inadequate tactical deployments and incoherent implementation of community policing principles.

Police clear out the crowds on Bourbon Street just after midnight for the end of Mardi Gras festivities in New Orleans, March 9, 2011. (AP Photo/Gerald Herbert)

In 2011, the Justice Department released a review of the New Orleans Police Department that examined incidents from the previous two years. While the police department’s image had been tarnished by a number of high-profile cases — such as the Danzinger Bridge killings in the aftermath of Hurricane Katrina — there was no one particular incident that prompted the administrative action. Rather, then-incoming Mayor Mitch Landrieu had asked for a federal review at the beginning of his term in 2010 over concerns about police behavior. Here’s part of what the Justice Department found:

We found that the deficiencies that lead to constitutional violations span the operation of the entire Department, from how officers are recruited, trained, supervised, and held accountable, to the operation of Paid Details. In the absence of mechanisms to protect and promote civil rights, officers too frequently use excessive force and conduct illegal stops, searches and arrests with impunity. In addition, the Department’s culture tolerates and encourages under-enforcement and under-investigation of violence against women. The Department has failed to take meaningful steps to counteract and eradicate bias based on race, ethnicity, and LGBT status in its policing practices, and has failed to provide critical policing services to language minority communities.

In more than twenty percent of the NPD force incidents reviewed, the force as reported appeared unreasonable and thus in violation of the Constitution. Further, there has been substantial underreporting of force by NPD officers, and most NPD use of force investigations have been too inadequate to support reliable conclusions about whether an officer’s use of force — including deadly force — was reasonable.

In 2012, the Justice Department released its findings in the investigation of the Portland Police Bureau, which was mounted in the face of a high number of officer-involved shootings of people with mental illness. The review, which spanned years of incidents, was less harsh on broader uses of force by police, but did find significant issues with the bureau’s treatment of the mentally ill:

Most uses of force we reviewed during this investigation were constitutional; however, we find reasonable cause to believe that PPB is engaged in a pattern or practice of unnecessary or unreasonable force against people with actual or perceived mental illness. This pattern or practice is manifest through the excessive and inappropriate use of [electric control weapons] and by using more force than necessary to effectuate arrests for low-level offenses.

A Seattle police officer scuffles with a protester during an Occupy Seattle May Day rally on Tuesday, May 1, 2012. (Stuart Isett/Bloomberg via Getty Images)

A Justice Department investigation into the Seattle Police Department released in 2011 described “routine and widespread use of excessive force by officers.” The review, which covered two years of incidents, was prompted by a spate of high-profile confrontations between officers and people of color. Here’s a portion of what it found:

We find that SPD engages in a pattern or practice of using unnecessary or excessive force, in violation of the Fourth Amendment to the United States Constitution and Section 14141. Deficiencies in SPD’s training, policies, and oversight with regard to the use of force contribute to the constitutional violations. Officers lack adequate training or policies on when and how to report force and when and how to use many impact weapons (such as batons and flashlights). We also find that, starting from the top, SPD supervisors often fail to meet their responsibility to provide oversight of the use of force by individual officers. Command staff does not always provide supervisors with clear direction or expectations of how to supervise the use of force.