After lulling the public into believing that using drones in the U.S. would be confined to border patrol or for counter-terrorism in the event of an imminent threat, we are beginning to see police calling for far wider implementation of drone surveillance.

I’ve reported several times about the years-long battle in Los Angeles over the use of police drones. The plan resulted in severe pushback from civil liberties groups such as the Stop LAPD Spying Coalition and eventually resulted in an agreement to in fact limit their use to extreme threats and never for surveillance.

More recently, Connecticut went much further with a new plan for integrating drones into their fusion center matrix of camera surveillance that would also utilize citizen cooperation into a far-reaching local spy network. Most troubling was the list of “quality-of-life-issues” that included “illegal dumping, ATVs and dirt bikes, motor vehicle violations, narcotics markets, car break-ins and larcenies.” All of which might spark tracking and pursuit by police drone.

In a typical step-by-step movement of the Overton window, it’s Brunswick, Maine that would like to usher in a new level of acceptance of an even greater degree of intrusion.

In a Press Herald article, “Brunswick police could be 1st in U.S. to use drones to spot railroad trespassers,” we read the following:

The project, which is still in its infancy, also would make the Brunswick Police Department the first in Maine to use drones to look for potential criminal activity, rather than at a crime scene or at a crash site.

Of course, “potential criminal activity” is perfectly in line with the trend toward pre-crime detection also taking hold across the country. But what I also found striking was the statement from a spokeswoman for the railroad administration, Desiree French, that “This device will only be used for detection, not enforcement” … as if pervasive spying is not at all a central issue. This is exactly how the Overton window shifts.

Naturally the rationale for thwarting trespassers along the rail line with hovering quadcopters equipped with cameras is safety:

“We can cover a mile in every direction in a fraction of the time (with a drone),” (Brunswick Patrol Commander) Garrepy said. “It’s more of education and detection. So we’re going to detect the violations, and send an officer out to educate them. We’re trying to prevent fatalities before they occur.”

Commander Garrepy also cited the fact that the area of the train tracks is private property, which is somewhat comforting until we read that “Garrepy envisioned his department’s drone project as an extension of an existing partnership with the federal government.”

I’d like to remind readers that up until 2010 it was a conspiracy theory to suggest that drones would be used in the U.S. at all. Until, of course, it came out that there had been a domestic drone program in the works for years. Subsequently, it became understood that the “border” actually extends 100 miles inland through an area that the ACLU dubbed the “Constitution-free Zone.” 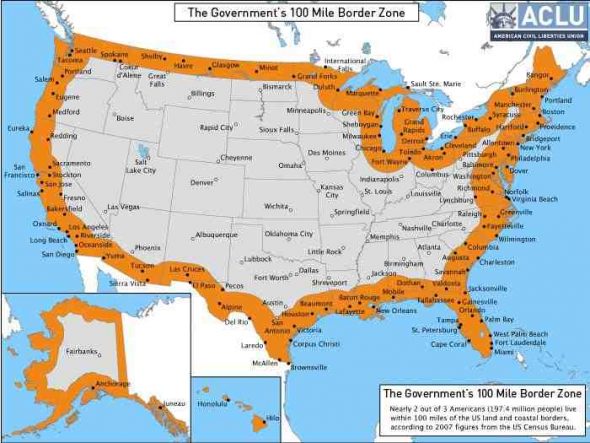 Once again, many people said, “OK, but clearly that’s to be used to get terrorists” (or now illegal immigrants). Well, if that’s the case, then the aforementioned police departments have a strange way of defining terrorism and illegal immigration.

It is now clear that an expansion is being planned for the incorporation of local police drone surveillance into everyday life. However, as is the case in Los Angeles and in Connecticut, Brunswick’s drone plans are still being drawn up. There remains a window of opportunity for citizens to contact their local police and express their opposition to the use of drones in routine police work, but that window appears to be closing very quickly.