Divest From War, Invest In People 2017

Above photo: SCWTAF members Joe Maizlish and Frances Schneider-Liau talk with Phillip Lester, who picked up the check for the Youth Justice Coalition. By Deppe/Walker.

Note: In 2017, war tax resisters in Philadelphia, New York City, San Diego, Los Angeles, Ithaca, Asheville, Redway (California), and Phoenix jointly reported their tax redirection to resistance organizations led by Black, Brown, and Indigenous people in their local communities, as part of the Collective Redirection effort. About $20,000 was given away as a stand against white supremacy in the US government as well as in organizing communities.

In addition, individuals and alternative funds gave away money, as they do every year, to many groups and individuals, with the intention of building a better world with these tax dollars than would be done if the money was given to the US government. 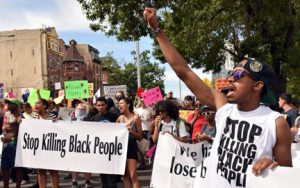 This year, war tax resisters from around the country are taking on a new initiative, to collectively redirect taxes to resistance organizations led by Black, Brown, and Indigenous people. Together, we will refuse to pay tens of thousands of dollars to our oppressive government and redirect that money directly to organizations that are challenging the very foundations of oppression in our society.

You can connect with other war tax resisters in your area by checking here, or by contacting Sam Koplinka-Loehr directly to learn more (organizer@nwtrcc.org).

Here are two ways in which this new initiative is exciting and critically important to our movements.

This initiative builds on our work and strengthens solidarity

War tax resisters have been involved with movements fighting all forms of oppression for a long time. The National War Tax Resistance Coordinating Committee’s (NWTRCC) statement of purpose reads, “NWTRCC sees poverty, racism, sexism, homophobia, economic exploitation, environmental destruction and militarization of law enforcement as integrally linked with the militarism which we abhor. Through the redirection of our tax dollars NWTRCC members contribute directly to the struggle for peace and justice for all.” Our campaign, Divest From War, Invest In People, has worked to address these intersections for years.

Our movements need to be working together more now than ever before, and more actively supporting the leadership of Black, Brown, and Indigenous organizers in our communities. We are facing the ongoing legacies of racism, militarism, and economic exploitation that are killing millions of people around the world. If we are to be truly effective, we must not only recognize our shared struggle, but actually figure out how to be in the struggle together.

In preparation for a workshop in Amherst, Massachusetts in the fall of 2016, Mandy Carter wrote, “While we speak of the intersectionality of racism, sexism, classism, homophobia, war, climate change, and economic exploitation, too often we do not go beyond the rhetoric. Do our actions match our analysis? […] We need to explore how we can work together. Our issues are connected, our resistance needs to be connected as well.”

Our analysis has long understood the connections between systems of oppression. We know that our tax dollars fund racist wars against Black and Brown people—the wars overseas and the wars on our streets. Whether it is drone strikes killing 13 innocent people in Yemen, or the police murdering Brandon Tate Brown in Philadelphia, the US government is directly targeting Black and Brown people for destruction here and abroad.

Alongside the ~45% of the federal budget that goes to the military, $9 billion goes to federal prisons and $14 billion to federal law enforcement. Police, prisons, immigrant detention facilities, and armed occupation are all vital parts of this racist system, and work in tandem. One example is the deportation of Latinx people who are crossing the border into the US to flee civil wars started by US secret operations in Latin America. Another is the ongoing incarceration of members of the Black Panther Party, a movement that threatens the very functioning of the imperialist war machine. Or native water protectors at Standing Rock facing off with TigerSwan security forces, a company employed by the Dakota Access Pipeline that also operates alongside the military in Afghanistan and Iraq. 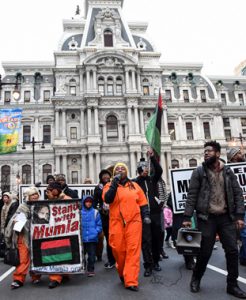 Perhaps no document has better articulated these connections than the Movement for Black Lives Policy Platform, which was released in 2016. In a damning analysis, it calls for a globally united movement for liberation; a movement led by Black and Brown people that sees US imperialism as operating around the world as well as against our own people here in this country.

The platform reads, “As oppressed people living in the US, the belly of global empire, we are in a critical position to build the necessary connections for a global liberation movement. Until we are able to overturn US imperialism, capitalism and white supremacy, our brothers and sisters around the world will continue to live in chains. […] As it stands, funds and resources needed to realize domestic demands are currently used for wars and violence destroying communities abroad. State violence within the U.S. is intimately linked with empire and war-making globally.”

This call to action is powerful and clear. Our new war tax resistance initiative seeks to answer a piece of this call, refusing money to this racist, imperialist, and colonial government and redirecting it to Black, Brown, and Indigenous organizers who are working on the frontlines of change.

This initiative focuses on our local relationships and movements

At the national war tax resistance gathering in Florida in November 2016, a group of folks sat down to think through this initiative. A number of us brought it back to our communities as our redirection effort for the coming year. We decided that it makes most sense for war tax resisters to coordinate this effort on the local level based on our relationships with other organizations, and NWTRCC will help publicize the effort and gather information on the total amount that was redirected.

Tax resisters have been engaged with struggles for racial justice in our communities for a long time. This is an opportunity to redirect resources to those fights and more directly support Black and Brown leaders in our areas. By having it be locally based, this allows each community to shape the effort in a way that works best for them. Our communities are not monolithic, and organizing looks different depending on where we are. What makes sense in Eugene, Oregon is different than in Philadelphia or San Diego.

There are many avenues for moving this effort forward, again based on our relationships. Some communities are co-hosting workshops with other organizations to build solidarity between our movements and plan collective action. Others are meeting with activist organizations to encourage them to resist taxes and redirect the money to Black Lives Matter organizers in their area. Some tax resisters are actively involved in native struggles to protect the water and are organizing to redirect tax dollars to these fights. The main thing is showing up, being present at events and actions, and asking how you can support the ongoing work led by Black, Brown, and Indigenous organizers.

We can no longer work against injustice while our tax dollars fund the systems we seek to dismantle. On the flip side, we can no longer refuse payment while not supporting the movements that are working on the frontlines. For Black and Brown people thinking about tax resistance, this initiative is a coming together that recognizes the need for a movement that is both calling out systemic racism and also challenging the government funding behind the police, prisons, the military, and occupation. For white people thinking about tax resistance, this is an opportunity to be accomplices, refusing to pay for our oppressive government and redirecting money directly to organizers who are targeted by our white supremacist system and are fighting for liberation. Even for folks who are not resisting taxes this year, there are other ways to be involved. You can put time and energy into building stronger relationships between movements in your area.

Just as there is a huge wealth gap between white and black families based on historical and ongoing institutional racism, there is also a funding gap for organizations based on race. White groups generally have more funding and access to wealth because of systemic racism and generational privilege that often leaves Black, Brown, and Indigenous organizations doing more work with fewer resources.

This initiative recognizes that the economic elements of systemic racism operate in our organizing communities, with many Black, Brown, and Indigenous organizers doing years of unpaid liberation work while white organizers have access to donations and foundation support. This is about showing up and building relationships between our movements. Redistributing resources can be one piece of that, supporting the fierce liberation work that is already happening in our communities, work that seeks to dismantle the very structures of privilege and oppression.

NWTRCC will provide support to local groups as well as gather information on how much was redirected in total. This is an exciting new initiative to stand explicitly against systemic racism and militarism, while strengthening the connections between our movements.