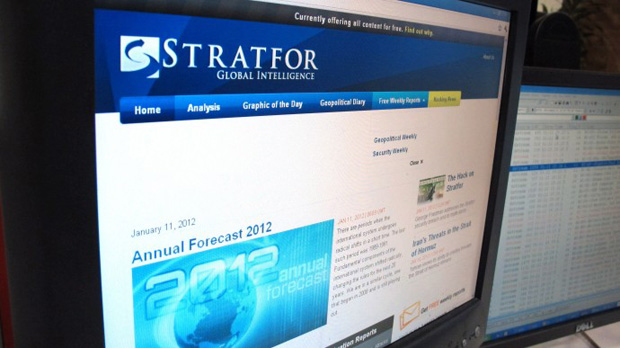 This is Part 1 of an exclusive Mint Press News investigation into the story of Stratfor.

On Christmas Day 2011, the hacktivist collective Anonymous ruined the day for a security firm that, throughout much of its history, enjoyed operating in the shadows.

The firm: Strategic Forecasting, Inc., an Austin, Texas-based intelligence-collecting contracting company better known as Stratfor. Its clients include some of the most profitable multinational corporations on the planet, such as the American Petroleum Institute, Archer Daniels Midland, Dow Chemical, Duke Energy, Northrop Grumman, Intel and Coca-Cola.

Anonymous hacked into the content management system of Stratfor’s computer system, eventually handing over 5.2 million emails and accompanying attachments to WikiLeaks, which coined the database the “Global Intelligence Files.”

Working through an informant named “Sabu,” who posed as a fellow “comrade,” federal officials tracked down the hacktivist responsible for the leak, Chicago’s Jeremy Hammond, just three months later.

In March 2012, the FBI raided Hammond’s apartment and handed him charges. After more than a year of sitting in the Manhattan Correctional Center, Hammond eventually settled out of court in May 2013. He pleaded guilty to violating the Computer Fraud and Abuse Act, and his sentence will be handed down on Sept. 6. He may serve up to 10 years in prison.

The goal of a corporate PR plan “must be to separate the fanatic activist leaders … from the overwhelming majority of their followers: decent, concerned people who are willing to judge us on the basis of our openness and usefulness,” Pagan stated in 1982, fully understanding that the public should never know this was the game plan.

Hammond — perhaps without knowing every detail of the history of the playbook itself — essentially cited it as the rationale behind his Stratfor hack and leak to WikiLeaks.

“I believe in the power of the truth. In keeping with that, I do not want to hide what I did or to shy away from my actions,” he stated in a press release announcing the plea deal. “I believe people have a right to know what governments and corporations are doing behind closed doors.”

In this investigation, Mint Press examines Stratfor’s rise to power and its use of the “divide and conquer” philosophy to take on some of the largest boycott movements against multinational corporations.

The story of Stratfor begins with a short-lived but deeply influential firm called Pagan International.

If there’s a short description of the modus operandi of Stratfor’s predecessors, military-like “divide and conquer” perceptions management — or rough-and-tumble public relations — is it.

That’s not by accident. Two of Pagan’s co-founders started their careers doing covert work for the U.S. military. Modern public relations got its start in military psychological operations, or psy-ops. “Divide and conquer” is one of the tenets laid out in the “U.S. Counterinsurgency Field Manual.”

Pagan International was named after Rafael D. Pagan Jr., who joined the U.S. Army in 1951 and spent two decades doing upper-level military intelligence work. He used it as a launching point into the corporate PR world.

Upon leaving the Pentagon, Pagan got three public relations jobs for corporations seeking markets for their products in the developing world.

“Pagan began his international business career in 1970 as a senior executive in new business development with three major multinational companies, International Nickel of Canada (now Inco), Castle & Cooke (now Dole), and Nestle,” according to his obituary. “He specialized in addressing conflicts for multinational companies seeking to invest and operate in Third World countries.”

Pagan followed in the footsteps of the father of modern public relations, Edward Bernays, who helped with the PR surrounding United Fruit Company’s work with the U.S. government to foment a coup in 1954 in Honduras. Pagan also did PR for Castle & Cooke in Honduras.

Pagan’s experiences working in the Honduran “banana republic” under the U.S.-installed right-wing, corporate-friendly military dictatorship would suit him well for his the next step of his career: doing the PR bidding of multinational corporate behemoth Nestle.

The playbook in action for Nestle

Speaking at the April 1982 Public Affairs Council conference to his colleagues in the PR industry, Pagan revealed the skeleton of the playbook that would last all the way through the Stratfor days.

Pagan International arose out of the ashes of a controversial Nestle public relations campaign named, in Orwellian fashion, the “Nestle Coordination Center for Nutrition.” It was co-run by Pagan and Jack Mongoven.

Mongoven was once a reporter for The Chicago Tribune and served as an executive editor of Pioneer Newspapers before becoming a spokesman for the Department of Health, Education and Welfare and then the Republican National Committee.

Nestle’s Coordination Center for Nutrition began in 1980 as a major public relations effort designed to fend off complaints and an eventual international boycott. Criticism of Nestle was spearheaded by the British group War on Want, which tracked the company’s marketing of powdered baby milk in the developing world in a 1974 investigation called “The Baby Killer.”

Nestle had decided the developing world would be a good place to sell its baby formula, despite the fact that the formula interrupted women’s lactation process and prevented their breasts from producing enough milk.

“Women who were induced to use [the] formula in place of breast milk often had no choice but to dilute the formula with contaminated water, leading to diarrhea, dehydration and death among … infants,” explain John Stauber and Sheldon Rampton in their book, “Toxic Sludge Is Good for You! Lies, Damn Lies and the Public Relations Industry.”

This behavior by Nestle created a global uproar and eventually planted the seeds of a boycott by more than 700 churches and activist groups.

Mongoven and Pagan — under the auspices of the Coordination Center for Nutrition, which shared office space with The Tobacco Institute, according to Legacy Tobacco Archive Library documents — decided the best response to the burgeoning social movement was to divide and conquer it.

One of their first strategies was to peel off some of strongest supporters of the anti-Nestle campaign — educators.

“Some of the boycott’s strongest support came from teachers, represented by the National Teachers Association, so NCCN courted support from American Federation of Teachers, a smaller, more conservative rival union,” wrote Stauber and Rampton.

Nestle also won over an ally from the inside of another institutional opponent: churches.

“To counter the churches involved in the boycott, they needed to find a strong church that would take their side,” Stauber and Rampton further explained. “The United Methodists were supporting the boycott, but through negotiations and piecemeal concessions, Nestle gradually succeeded in winning them over.”

To make amends, Nestle worked with the Infant Formula Audit Commission to ensure its global marketing practices were in line with World Health Organization rules. It was chaired by Edmund Muskie, a former U.S. senator and U.S. secretary of state under President Jimmy Carter.

The problem: Nestle created the commission, funded it and called all the shots. Few equipped with this knowledge were surprised when the commission concluded “the company has not been improperly ‘dumping’ baby formula on Third World hospitals,” as explained in The Los Angeles Times.

Muskie’s audit commission — or, better put, Nestle’s — is now seen as a “model” for corporations seeking to defuse sticky communication crises, as documented in a 1986 article in the Journal for Business Strategy.

For his successful efforts running what he would later describe as “a responsive, accurate corporate issue and trends warning system [with] analysis capability,” Pagan received the Public Relations Society of America’s prestigious Silver Anvil Award. Other industries have followed similar strategies, such as the shale gas industry’s “Energy in Depth” and corporate education reform’s “Stand for Children.”

Hot off a major victory over advocacy groups nationwide and having learned much from the “war,” Pagan and Mongoven hopped off the Nestle gravy train and started their own firm in 1985: Pagan International.

“The strong influence public and social issues today have on commercial operations has created a need for companies to evaluate carefully national and international policies affecting business,” Pagan said in a 1985 press release announcing the firm’s launch.

“Pagan said that this system enables [the firm] to advise clients on national and international trends and movements that can adversely affect corporations,” the press release further explains. “This gives the companies an opportunity to enter into public discussions and help define the parameters of the debate early on, rather than just react to agendas thrust upon them by activists and other groups.”

Enjoying a client list during its brief lifetime that included Dow Chemical, Novartis, Chevron and the government of Puerto Rico, Pagan International was hired by Royal Dutch Shell to fend off another international boycott for the company’s work with the apartheid regime in South Africa.

Activists demanded Shell stop doing business with South Africa until it was no longer an apartheid state, threatening a boycott if it failed to comply. Shell chose to continue “business as usual.”

The resulting boycott served as a business opportunity for Pagan International, which stepped in and — as it did with Nestle — sought to divide and conquer the boycott movement. Shell hired Pagan and Mongoven to do so under a now-notorious 268-page document called the “Neptune Strategy.”

“Neptune Strategy” was leaked to the press in 1987, greatly embarrassing both Shell and Pagan International. Paralleling the Muskie audit commission, Pagan’s “Neptune Strategy” created an industry front group called the Coalition on Southern Africa — which shared office space and a phone line with Pagan — to divide boycott supporters into an overarching movement settling for weaker demands.

“Pagan … proposed that Shell ‘develop a task force’ of South Africans, church leaders, U.S. activists and executives that could issue a statement about the company’s role in helping South Africa’s blacks prepare for life after apartheid,” according to a 1987 piece appearing in Inter-Press Service. “And Pagan singled out key black activists and church leaders to help it carry out its plan.”

In the “Neptune Strategy,” Pagan outlined a strategy that fit the familiar pattern: isolate and then conquer the “fanatic activist leaders.”

“[P]ost-apartheid planning should deflect anti-apartheid groups attention away from the boycott and divestment efforts and direct their vision and efforts into productive channels,” explained the “Neptune Strategy.”

“Productive,” according to Pagan, is anything that would ensure Shell continues to produce high profit margins. After taking a beating by churches during the Nestle boycott, Pagan realized its bottom line hinged upon churches supporting Shell as it conducted business with apartheid South Africa.

“[M]obilized members of the religious communions provide a ‘critical mass’ of public opinion and economic leverage that should not be taken lightly,” Pagan wrote in the “Neptune Strategy.” “If they join the boycott and pressure for divestment, it will become a radically different and far more costly problem than it now is.”

Pagan International’s reputation soured after “Project Neptune” was revealed to the public and the firm lost the $800,000 of income it was receiving through its contract with Shell. Pagan also lost other key clientele after “Neptune” was exposed.

In 1990, Pagan shut its doors for good and filed for bankruptcy, opening the doors for ascendancy of the firm that would later merge into Stratfor: Mongoven, Biscoe & Duchin.

This is Part 1 of an exclusive Mint Press News investigation into the story of Stratfor.