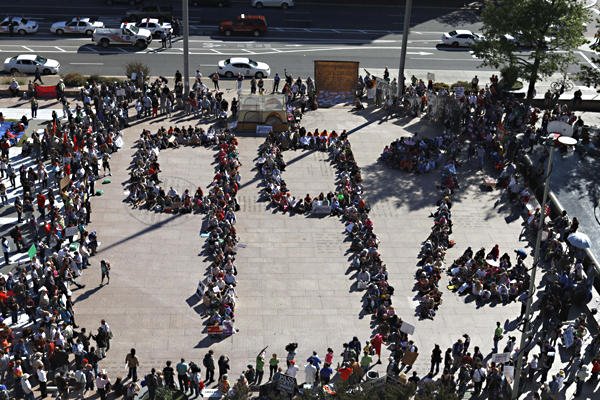 The article below published in the Wall Street Journal focuses on how the liberal wing of the Democratic Party is pulling the party to the left.  It also focuses on how President Obama’s popularity is dropping among Democrats.  While the Wall Street Journal does not credit the resistance movement as one of the reasons for this division in the power structure, there is no question that the  movement is changing the political debate in the country and changing the narrative through our own independent and citizen’s media.

A resurgent liberal wing of the Democratic Party is adopting a new assertiveness that threatens to constrict President Barack Obama while shaping the race for his successor.

Liberals are pushing to boost Social Security benefits­a tack opposite from the one Mr. Obama took when he was discussing a “grand bargain” fiscal deal­and are sending warning flares over the president’s push for a Pacific trade deal. Meanwhile, the emergence of Sen. Elizabeth Warren (D., Mass.) as a leading voice of many on the left suggests an appetite for more aggressively liberal politicians on the national stage, a space that other potential 2016 presidential candidates, such as Maryland Gov. Martin O’Malley, are also moving to fill.

Mr. Obama’s popularity in the party has muted disputes among Democrats over friction points like the scope of the health-care overhaul and the future of Bush-era tax cuts. But long-standing strains are re-emerging amid unease with some of the president’s policies and as the party looks to 2016.

Josh Orton, who runs Progressives United, a campaign group founded by former Wisconsin Sen. Russ Feingold, says there is “a recalibration under way” as liberals “start laying the groundwork for policies” that look toward 2016.

Strong pushback from Democrats in Congress this month threatened to derail the president’s planned military strike on Syria and effectively took Lawrence Summers out of the running as the next Federal Reserve chairman. Now, the hardening of positions on the left against any move to trim Social Security or Medicare spending will limit Mr. Obama’s flexibility going into the big budget fights this fall.

“This tectonic shifting of the ideological plates has made it much harder for the president to rely on the usual spontaneous support from his base,” said Rep. Alan Grayson (D., Fla.), who has parted with the White House on many fronts this summer.

Disenchantment with the Obama presidency among liberals takes many forms. Some express frustration over stymied efforts to tighten gun laws and overhaul immigration rules. Others express anger over economic inequality and a sluggish job market.

Mr. Obama’s approval among all Democrats has dropped to 77% from 90% at the end of the 2012, a Wall Street Journal/NBC News poll this month found. Disapproval among liberal Democrats jumped to 17% from an average of 7% in Journal polling between January and June.

Megan Vigil, a 33-year-old Los Angeles makeup artist, calls herself an “out-on-the-fringe liberal,” but counts herself among supporters who no longer approve of Mr. Obama. “He’s all about what will benefit corporations and their bottom line,” she said.

Ryan DeFazio, a 28-year-old New York real-estate broker, has also soured on a president he voted for twice, saying: “He’s looking toward Syria but not at the many problems we have here at home.”

Strands of a more populist liberalism are sprouting across the country in ways that Democrats predict will spill into the 2016 presidential-primary race. In New York City, liberal Democrat Bill de Blasio easily won this month’s mayoral primary with promises of tax increases on the rich to pay for more education.

Ms. Warren warned in a speech to the AFL-CIO this month of the various powers­”Wall Street, pharmaceuticals, telecom, big polluters and outsourcers”­who she said were “all salivating at the chance to rig upcoming trade deals in their favor.” After her speech, which also portrayed the Supreme Court as a rubber-stamp for corporate interests, AFL-CIO President Richard Trumka mused to the audience how much better Washington would be “if only we could clone her.”

Ms. Warren’s message appears to be resonating. A recent Quinnipiac University poll tested the warmth of feeling that voters had about an array of national political figures. Ms. Warren came in third on the feeling thermometer, behind New Jersey Gov. Chris Christie and Hillary Clinton. She was also known by nearly half those surveyed, an unusually high name recognition for a politician who took office just eight months ago.

Mr. O’Malley, who is openly weighing a presidential run, cites both Mr. de Blasio and Ms. Warren as politicians who are championing policies to alleviate “the ever-widening gap between the ultrawealthy and the struggling middle class.” Mr. O’Malley has raised taxes on the wealthiest 14% of residents in his state to pay for more education and transportation, among other things, a recipe he says the rest of the country­and his own party’s leaders­should follow.

Within the Democratic Party, Mr. O’Malley said, “the era of triangulation and splitting the loaf are over.” He lamented times in the past when Democrats “have pedaled the false snake oil that tax cuts make us better as a country and a people.”

Liberal groups, frustrated that Mr. Obama and Democratic lawmakers signed on to the sequester, a set of budget cuts that started in March, oppose any additional cuts in coming budget talks. “Forget the debt-ceiling business. We are going to be pushing outright for new spending to create jobs,” said Jim Dean, who directs the liberal advocacy group Democracy for America, founded by his brother, former Vermont Gov. Howard Dean.

Mr. Obama also faces increasing unrest among supporters in organized labor over provisions in the health law that threaten to trim benefits of many union members.

In July, the heads of three major unions, including the Brotherhood of Teamsters, wrote a hard-hitting letter to Democratic leaders in Congress warning of a schism if certain fixes aren’t made to the law.

“Time is running out: Congress wrote this law; we voted for you. We have a problem; you need to fix it,” the letter said, noting the long tradition of union help for Democrats during elections.

One White House official said Democrats have shown a degree of party loyalty to Mr. Obama exceeding that of his recent predecessors. The official described the liberal backlash over Mr. Obama’s Syria policy as “understandable,” but said party divisions are stronger on the Republican side.

Union officials and labor experts say the tensions are far from what President Bill Clinton had to wrestle with after he signed the North American Free Trade Agreement. “But this is the rockiest the relationship has been” during the Obama years, said Steve Rosenthal, a former Clinton labor adviser and Democratic campaign strategist.

Mr. Rosenthal doubts union leaders will pull back campaign support for Democrats next year, but he notes that a slide in labor votes for Democrats in 1994 contributed to the huge Republican gains in Congress that year.

Liberals in Congress, along with labor groups, could also cause Mr. Obama trouble on the trade front. The president hopes to win congressional approval for the U.S. to enter a free-trade deal with an array of Asian countries known as the Trans-Pacific Partnership. But labor groups and liberals in Congress are threatening to scuttle a deal, with likely support from like-minded lawmakers on the right.

“Trade is another one of those areas where the old ideological lines just don’t apply,” said Mr. Grayson, who said liberals now regard legislation opening up international trade “as a great failed experiment.”