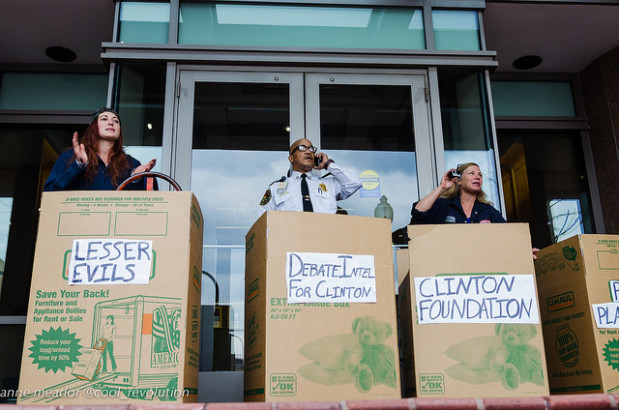 Above Photo: From Anne Meader @cool_revolution

Washington, DC — Protesters dressed as movers charged the door of the Democratic National Committee (DNC) headquarters today, trying to gain entrance to the building. Security fended them off and barricaded the front steps.

Protesters drove up in a U-Haul van wearing blue jumpsuits. They carried cardboard boxes and wheeled a hand truck to the front door, claiming they were hired movers. They unfurled a large banner reading “Betrayal” and recited chants such as, “We want democracy, not corporatocracy!” They alleged that the Democratic Party, headed by the DNC, has “sold out” to corporate interests, and corruption played a part in the Party’s election defeat.

The Democratic Party tried to stay in power by “manipulation and fear,” said Kevin Zeese of Baltimore-based Popular Resistance. “Why did they lose? Because they ignored the people. Obama pushed the TPP [Trans Pacific Partnership] on people. That’s why we’re moving the DNC out of government.”

The demonstrators taped signs to the building reading, “For Sale” and “Evict the DNC.” They arranged cardboard boxes labelled “Lesser Evils,” “Pay to Playbooks,” and “Empty Promises.”

Washington, DC resident Toni Sanders says she believes that the Democratic Party took black people for granted in this election, assuming that they would vote for Hillary Clinton.

“If you really took us seriously as a people you wouldn’t push a candidate who backed [her husband’s] crime bill, who called us superpredators,” she said. She believes that Democrats didn’t respect black people’s intelligence. “They used Obama to guilt us, tiptoed around Black Lives Matter,” she said. She objected to President Obama’s signing of the “Blue Lives Matter” bill, and said that Hillary Clinton didn’t have solutions for police brutality and police shooting of blacks either. She also didn’t address issues like creating jobs and problems in inner cities.

“They didn’t give us a choice. This is supposed to be our party,” she said. “They hurt us so much more” with Hillary Clinton as the candidate. She said she voted for Bernie Sanders in the primary and Jill Stein in the general election.

The DNC’s alleged collusion with the Hillary Clinton campaign to quash Bernie Sanders in the primary concerned the protesters, but it is only a piece of a larger picture of corruption,according to many of the protesters. “The DNC sold us out in the first place when they ran over Bernie,” said Peter Weston of Seattle-based Backbone Campaign. “The DNC is not serving people, it is serving corporatocracy.”

The protesters’ ire was not limited to the DNC. Only two days before, a group organized by Popular Resistance and Backbone Campaign blockaded a busy interstate highway in Washington, DC to bring attention to racism, xenophobia and policies serving the wealthy they believe a Trump administration will embody.