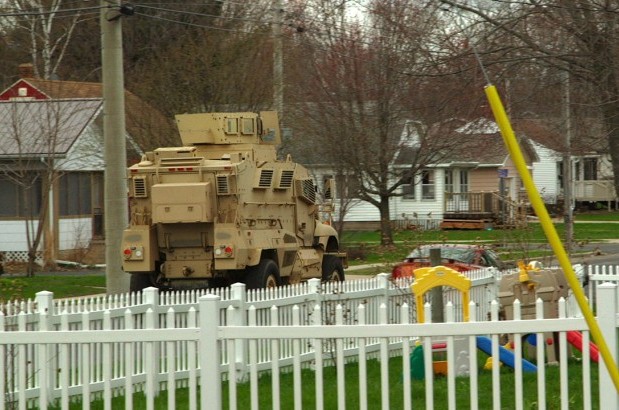 “Do Not Resist”: Police Militarization Documentary Everyone Should See

The officers, members of the Richland County Sheriff’s Department tactical team, were descending on a modest one-story house looking for drugs and guns. The team smashed through the windows of the home with iron pikes, then stormed the front door with rifles raised.

Inside, they found a terrified family of four, including an infant. As the family members were pulled outside, Atkinson’s camera captured a scene that plays out with startling regularity in cities and towns across the country, one of many included in his new documentary, “Do Not Resist,” an examination of police militarization in the United States.

The police begin rooting through the trash. “Where the fuck is the weed?” one officer asks, as the team ransacks a car parked in the driveway. “Boy that was sweet,” another says, commenting on the speed of the raid. One officer finds a backpack, which yields a bit of marijuana — it’s not enough to roll a joint, but it’s something.

The officer in charge questions the owner of the backpack, a young African-American man. In a conversation captured on Atkinson’s microphone, the young man, a local community college student, tells the officer he runs a small landscaping business.

Knowing he’s being taken into custody, with his hands cuffed in front of him, he asks the officer for a favor: Can he remove the $876 in his pocket set aside for new lawn-care equipment and give it to one of his employees to go to the hardware store?

Instead of handing the cash to the arrestee’s co-worker, the tactical team seizes the money.

“I never one time said you’re a bad person,” the officer tells the young man before he’s led off. “I just have a job to do, and you happen to be in the middle of it.”

The pernicious practice of civil asset forfeiture, which allows law enforcement to grab cash or property during the course of raids, then requires people to prove the assets were not related to criminal activity in order to get them back — and allows police to keep the assets if they fail to do so — has been well documented.

What’s less common is to see one of those interactions play out on camera. Capturing those kinds of moments is what “Do Not Resist” is all about.

Atkinson’s directorial debut has already taken home this year’s prize for best documentary at the Tribeca Film Festival and is currently making the rounds in select cities around the country. Radley Balko, author of “Rise of the Warrior Cop: The Militarization of America’s Police Forces,” has called the film “terrifying,” “powerful,” and “important.”

Based on substantial on-the-ground reporting, “Do Not Resist” is both unsettling to watch and necessary to see. The film begins in Ferguson, Missouri, on a rainy night of protest in August 2014 that erupted into a melee of tear gas and screaming. It then quickly moves to a seminar with Dave Grossman, a law enforcement guru who gives trainings on lethal force and the application of a warrior mentality in the name of the law.

“The policeman is the man of the city,” Grossman begins, before explaining that cops he’s spoken to routinely describe their first on-the-job kill as a prelude to the best sex of their lives. “Both partners are very invested in some very intense sex,” Grossman says. “There’s not a whole lot of perks that come with this job. You find one, relax and enjoy it.”

Grossman believes that a violent reckoning between law enforcement and critics of police militarization is fast approaching. “We are at war,” Grossman tells the crowd, “and you are the front-line troops in this war.”

The language reflects a theme that runs throughout “Do Not Resist.”

Atkinson began the project three years ago in the wake of the Boston Marathon bombings. The images of armored cars and commando cops in the streets resonated for him on a personal level. Atkinson’s father spent 29 years as a police officer outside Detroit — 13 of them on a SWAT team, where he held the rank of commander. Atkinson and his brother would take part in their dad’s training, playing the part of hostages when they were little and mock shooters when they were big enough to handle weapons.

Watching the footage from Boston, it was obvious to Atkinson that something profound had shifted since his dad’s days on the force. He set out to create a film that would capture that shift. The “Do Not Resist” crew attended expos and trade shows, community meetings and federal hearings, training seminars and SWAT contests. All told, the team traveled to 19 states, went on roughly 20 police ride-a-longs, observed half a dozen raids, and interacted with hundreds of police officers.

The hope was to be on-hand for an incident in which a SWAT team’s use of heavy weapons would be unquestionably warranted. “I thought the whole time I would be able to show something that would kind of reflect the entire scope of what a SWAT officer might go through sometimes, where you actually do need the equipment,” Atkinson explained.

Instead, the filmmaker repeatedly found himself watching police with military-grade weaponry executing dubious search warrants. The frequency of the raids was particularly shocking, with one of the officers in the film claiming his team does 200 such operations a year. By comparison, Atkinson notes, his father performed a total of 29 search warrant raids over his entire 13 years in SWAT — according to some estimates, SWAT teams now carry out between 50,000 to 80,000 raids across the country annually.

“The search warrants, we’re told, are always used for massive drug dealers and kingpins, and then we run in these homes and we never found anything,” Atkinson said.

Beyond the day-to-day breaking down of doors, “Do Not Resist” explores the growing role of private surveillance companies in local policing, and law enforcement’s thirst for technology that can predict crimes before they happen.

The film highlights Persistence Surveillance Systems, a company offering low-cost aerial surveillance honed in Fallujah to domestic law enforcement. “We’re not out to watch the whole world, just all the world that’s got crime,” Ross McNutt, the president of the company, insists.

“That’s the next wave in the militarization of police,” Atkinson told The Intercept in an interview. “What we found was a whole slew of retired military officers now in the private sector now selling the exact same surveillance technology that they just got back from Iraq and Afghanistan with to local law enforcement for small money on the dollar.”

The intent of “Do Not Resist,” Atkinson said, is to provide a glimpse inside the realities of American policing, challenge the policing-for-profit model that has caused departments in economically depressed communities to treat their citizens as walking ATM machines, call out a warrior culture that divides law enforcement from the public they’re sworn to serve, and flag the dangers of war-zone technologies being applied domestically.

For the most part, the reaction from law enforcement has been positive, Atkinson said.

“I’ve had a lot of law enforcement really respond well to the film and say that it reflects these issues that a lot of them have been working on themselves,” he said.

As for his father, Atkinson said, watching the film stirs up uncomfortable feelings.