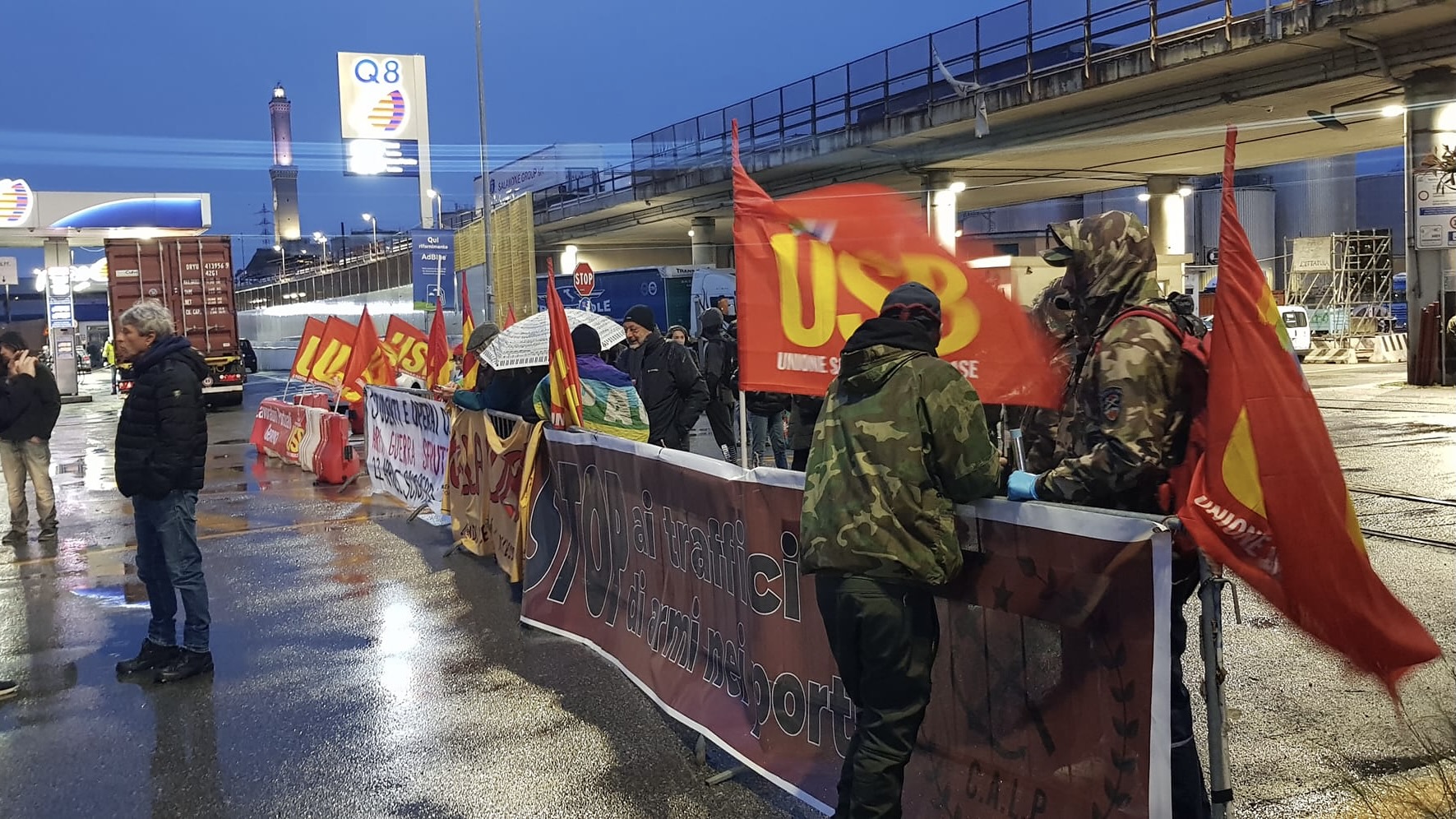 Dock Workers In Genoa Protest Transit Of Arms Through Their Port

Above Photo: Dock workers mobilize in the Genoa port. USB.

Working class formations in Italy have mobilized on numerous occasions to block the transit of arms through Italian ports and airstrips.

And have protested the complicity of the Italian government in imperialist wars.

On March 31, dock workers of the Italian port of Genoa observed a 24-hour strike protesting the usage of the port for the transit of arms which are likely to be used in deadly imperialist wars going across the world. The call of the strike was given by USB Italia trade union. Activists from various left, anti-war groups including Potere al Popolo participated in the blockade held at the Ethiopia crossing at the Genoa port and an assembly of workers at Cap in via Albertazzi.

During the protest, workers raised a banner which read “Not a penny, a rifle or a soldier for war“ and also stated that Italian ports and airstrips must not be used to make arms deliveries for imperialist war. The protesting workers also resolved for a greater participation in national mobilization of Italian workers on April 22 in Rome against the anti-worker policies of the Mario Draghi government.

Dock workers in Genoa have a legacy of anti-war interventions as the port has become a major transit point for cargo ships carrying weapons allegedly destined for use in the ongoing wars in Yemen and Ukraine. Earlier, in the first week of March, dock workers of Genoa protested the disembarking of camouflage tanks at the port from a ferry coming from Palermo, allegedly destined for Ukraine. On March 14, cargo workers at the Pisa airport refused to load cartons of arms and ammunition in planes destined to deliver humanitarian aid to Ukraine. Workers and trade unions in Italy have already denounced the transfer of arms and ammunition to Ukraine from Italian seaports and airports disguised as humanitarian aid.

The USB Italia union has stated that “on behalf of the interest of the US and NATO, the Mario Draghi government in the country is dragging Italy into more imperialist conflicts with the sending of our resources and the adoption of sanctions. The price of such conflict will be paid by workers with austerity and layoffs. As port workers have no intention of staying indifferent in the face of the new war winds that are blowing in Europe again”

“Not a penny, a rifle, or a soldier for war. Let’s block our gates to gun traffic. It’s time for the labor variant,” added the USB.

Potere al Popolo has demanded that there should not be any increase in military spending and that public money should be used for urgent social measures. “It is the workers more than anything else paying very dearly the price increase, the crisis of raw materials and energy etc. Italian workers are the ones with the lowest salaries in Europe. We want the government to stop the military escalation. This is why we stand by the workers who oppose the war.”