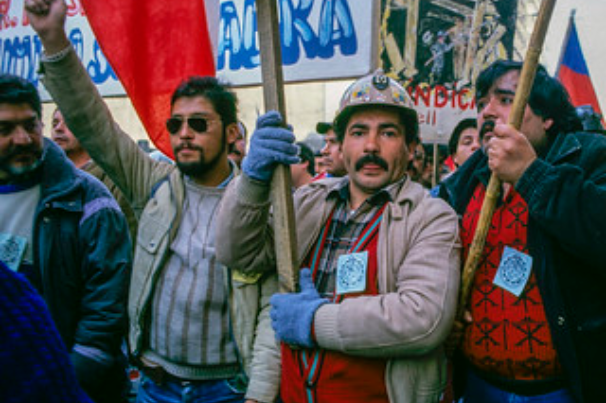 Over 11,000 soldiers and Carabinero police rampaged across Chile over the past 48 hours, firing live rounds at demonstrators and dragging protesters out of their homes at night in scenes reminiscent of the September 11, 1973 military coup.

Eleven people have died and there are 300 wounded, mostly in Santiago. The government of President Sebastián Piñera claims to have arrested over 2,100 people.

Many of those arrested claim they were denied access to lawyers and faced sexual harassment from soldiers and police. One group of female students told Prensa Opal they were forced to remove their clothes as soldiers doused them with water and screamed, “we hate communists.”

The crackdown was ordered from the highest levels of the Chilean state. In a Sunday night address to the nation, Piñera echoed former dictator Augusto Pinochet, declaring: “We are at war with a powerful enemy which is prepared to use violence without limit.”

The protest movement expanded yesterday and drew in broader sections of the working class, who responded with horror to the crackdown as videos of soldiers shooting students in the dark circulated across social media. Hundreds of thousands of people gathered in Santiago’s Plaza Italia yesterday afternoon chanting “soldiers, get out.”

Business was largely halted in Santiago and in many cities across the country even though the government announced Sunday it was rescinding the increase in metro prices that initially triggered demonstrations. A state of emergency remains in effect and the government expanded its nighttime curfew yesterday, with some areas moving its start time to as early as 6 p.m.

Dockworkers marched en masse through several cities, stopping the bulk of national exports and closing 20 ports as part of a national strike. Donning yellow vests worn for work, the sea of thousands of dockworkers resembled France’s “yellow vests” as they marched through the cities of Concepción, Antofagasta and San Antonio.

The major trade unions are desperately trying to prevent the situation from developing further out of control. The planned Wednesday walkout gives breathing space to the Piñera government to use force to beat students and protesters in the major cities into submission.

Even so, workers at the massive Escondida mine, owned by BHP Ltd., struck for 10 hours last night in what the trade unions scrambled to label a “warning stoppage” in advance of Wednesday’s planned walkout—an acknowledgment that workers do not want to wait to strike.

A union official was also filmed telling a skeptical mass meeting of dockworkers yesterday that there is “no need to make a scandal and throw rocks,” imploring workers to follow the union’s lead regarding the strike and claiming this was the only way to make the “revolution” they want.

The Stalinist Communist Party is also playing an active role in seeking to bring the demonstrations and strikes under control.

Prominent Stalinist Mayor Daniel Jadue tweeted that it is “notable that the head of the army has more prudence than the president of the republic,” referencing Piñera’s statement that the government is “at war” with protesters.

The Communist Party published a proclamation yesterday stating that the “false expectations irresponsibly created by Piñera and the right are the cause of accumulated anger and of the social explosion.” While claiming to support the protests, the CP blamed “lumpen elements for criminality and violence” in the demonstrations and called for new elections.

Spain’s El País published a headline yesterday titled, “Social protest flows over Piñera and brings Chile into a grave crisis.” The article raised the profound concern that none of the official political parties have a sufficient following in the working class to suppress the protests.

“No political force with representation in congress has been able to channel the social unease that has been expressed at least since 2006, when the first student protests broke out. This includes the Broad Front on the left, whose principal leaders were student protesters that led the demonstrations in 2011.” The Broad Front has echoed Stalinist calls for new elections and has similarly demonized “violent” protesters.

The movement in Chile is developing as a struggle against the rotten Chilean “democracy” that maintained fascist control of the military. In recent days, demonstrators have chanted: “this isn’t about 30 pesos, it’s about 30 years,” referencing the three decades since Pinochet left office in March 1990.

This week’s eruption of military violence exposes the so-called transition to democracy as a sham. Having crushed the mass strike wave of the late 1960s and early 1970s through fascist dictatorship, the Chilean ruling class responded to growing popular hatred of the dictatorship in the late 1980s by turning power over to an alliance of “left” parties called the Concertación.

The Concertación—which included the Socialist Party of murdered ex-President Salvador Allende—assured impunity for the Chilean military and allowed Pinochet himself to return to Chile in 2000, where he was greeted at the airport by military leadership in a display shown on national television. A critical role was played by UK Labor Party Home Secretary Jack Straw, who granted the ex-dictator a request to escape extradition to face prosecution in Spain.

Today, the parties of both the Concertación and of Piñera’s formerly pro-Pinochet National Renewal party are responsible for carrying out privatization efforts that go beyond what the Pinochet dictatorship was able to accomplish. This has produced among the highest levels of social inequality in the world.

Industry analysts and imperialist foreign policy journals are concerned by the prospect that demonstrations against social inequality could spread across Latin America. The Washington Post yesterday referred to the specter of a “Latin American spring” similar to the revolutions that shook North Africa and the Middle East in 2011.

Stratfor noted: “The Chilean protests come on the heels of similar anti-austerity unrest in Ecuador, which was triggered by the elimination of fuel subsidies. With regional economies squeezed by sluggish growth and governments still seeking to implement painful pro-market reforms, the situation is ripe for disruptive, widespread unrest.”

This clashes with a rosier tone taken less than a week ago when the Financial Times published an article praising Piñera as the “billionaire leader preaching virtues of the market” whose country is “a beacon of stability and sound management in a continent not famous for either.”

FT quoted Piñera: “Look at Latin America. Argentina and Paraguay are in recession, Mexico and Brazil in stagnation, Peru and Ecuador in deep political crisis and in this context Chile looks like an oasis because we have stable democracy, the economy is growing, we are creating jobs, we are improving salaries and we are keeping macroeconomic balance.”

Concerns over a growing global rebellion of the working class were expressed in a comment yesterday by Brian Winters, Vice President for Policy at the Americas Society/Council of the Americas: “Everyone following Latin America is watching this and saying, ‘Oh my god, Chile, too?’”