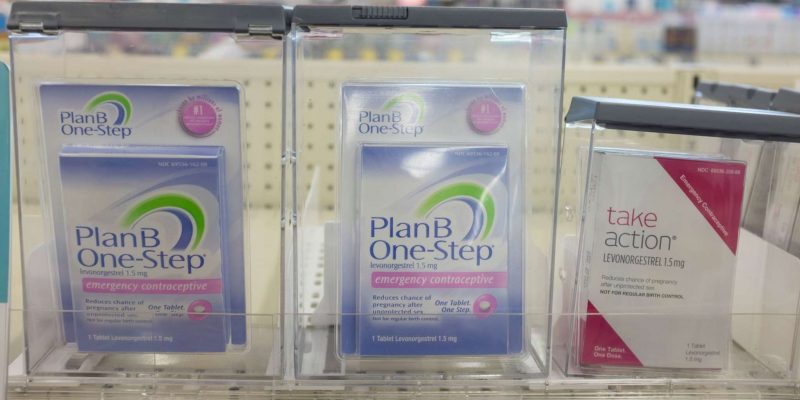 Above Photo: Contraceptive brand “Plan B” sits on a shelf at a local pharmacy in Montgomery, Alabama, on May 20, 2019. Seth Herald / AFP Via Getty Images.

Indiana – People love the pill. As a pediatrician and a researcher who studies access to contraception, I speak to patients from all walks of life, and, even if they choose not to use the birth control pill themselves, most people support making it affordable and easy to access for everyone.

Its near-universal support is not surprising: Birth control can improve people’s lives by giving them the freedom to plan their families, allowing them to delay pregnancy until they decide they are ready. Still, for many people, getting to a doctor to get a prescription for birth control isn’t as easy as it should be.

In Indiana and across the country, self-described “pro-life” politicians and organizations are often the only thing standing in the way of medically sound policies that would increase contraception access. It has been estimated that just one year after legislation allowing a pharmacist to prescribe birth control in Indiana, 86 unintended pregnancies would be averted. Ultimately, fewer abortions would occur — a stated goal of many “pro-life” lawmakers. These estimates don’t even take into account the significant impacts on infant and maternal mortality that would occur as a result of increased access to contraception.

Legislation increasing access to contraception should be widely hailed as “pro-life,” as birth control gives people the ability to control the trajectory of their lives, and does so by giving people the ability to decide when pregnancies will occur. Yet, certain politicians and organizations have pushed back at every turn for years on end. They are committed to blocking access for people and controlling people’s health care decisions despite mountains of evidence and economic analysis of the overall benefits, as well as the important benefit of trusting people to make decisions about their own bodies.

Expanding access to birth control is heavily supported by science and evidence, and endorsed by countless medical groups. Birth control is not only safe and highly effective at preventing pregnancy, it’s also overwhelmingly popular: More than 99 percent of sexually active women ages 15 to 44 have used at least one form of contraception. That’s more women than those who currently own a smartphone.

Unfortunately, when people try to access birth control consistently, there are many barriers that can put this basic health care out of reach. Because the law currently does not allow highly trained pharmacists to dispense birth control, people need to take time off work or school to schedule a doctor’s appointment. In addition, millions of people face high costs and lack insurance coverage or access to a health care provider. Indiana, in particular, has a shortage of primary care providers and a majority of our counties have been deemed contraceptive deserts.

Allowing pharmacists to prescribe birth control is a simple solution that can combat these obstacles quickly, increasing the locations where people can get this care, with hours that are more expansive than doctor’s offices, thereby giving people greater control over their reproductive health.

It’s clear that politicians’ opposition to this common-sense legislation is about control, not health. We have a long history of politicians negating public health and evidence and instead putting their personal ideologies ahead of the communities that they are representing. While the focus often starts with abortion, the shift to blocking access to reproductive health as a whole (including contraception) extended to the national stage when former Indiana Gov. Mike Pence became the vice president. His attacks on Title X funding for comprehensive reproductive health care still have impacts today and have set the stage for continued legal challenges.

The people of Indiana vote for politicians because we want a better, stronger state that works to make our lives easier. We want the kind of legislation that would reduce health disparities, lower our health care costs, and give us the medical and reproductive freedom we need. Yet, again and again, politicians are choosing ideology over science.

It doesn’t take a medical degree to know that we need more health care, not less — especially during a pandemic that has devastated people’s health and finances. If the anti-abortion movement truly cared about our lives and our well-being, they would join me and the millions of people across our state who use and support birth control in advocating for policies that ensure no one has to go without the health care they need.

In their silence and their opposition, it’s clear that they don’t care. Even without their support, we are still millions strong. It’s time for Indiana to follow the model of the 19 other states that have already adopted this legislation, and to lead the rest of the country in making health care more accessible.