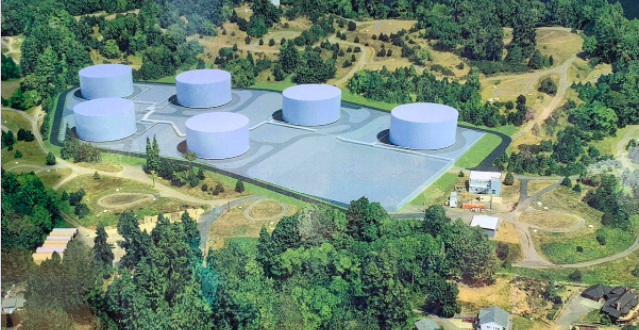 Above photo: Fuel tank upgrade project at Manchester. US Navy.

We Can’t Wait that long to Close Down Red Hill.

According to local news media in Kitsap, Washington, it’s expected to take approximately nine years to complete the six above-ground tanks project shutting down and closing 33 underground Navy fuel tanks at the US military Manchester Fuel Depot in Manchester, Washington and will cost the Department of Defense around $200 million.

It took the Department of Defense (DOD) 3 years to begin work on shutting down the tanks after the decision was made. The decision to close and remove the original 33 underground fuel storage tanks and construct six new above-ground tanks was made in 2018 but work did not begin to close down the facility until July 2021.

At that rate, it would take eighteen+ years to defuel and close Red Hill, assuming it holds 180 million gallons of fuel.

So, citizen pressure is critical to keep DOD’s feet to the fire to defuel the Red Hill tanks before another catastrophic fuel leak occurs here on O’ahu.. and certainly faster than the nine years it is taking to construct six above ground tanks in Washington!

As citizens keep the US military moving to close down Red Hill, the Department of Defense faces challenges in replacing the underground storage tanks, a decision they should have made decades ago.

Now they are faced with a logistics quandary of where to put the fuel. But the self-made tardiness of DOD’s decision must not be allowed to continue to jeopardize the drinking water of Honolulu.

DOD had made some major decisions on alternative sites for its fuel supply prior to the November 2021 Red Hill fuel leak and those decisions involved Australia.

In September 2021, Australia, UK, and the United States signed the well-publicized security pact, called “AUKUS” which allowed sharing of advanced defense technologies and providing Australian military contractors with the information on how to build nuclear-powered submarines, much to the displeasure of France that had a contract to sell diesel submarines to Australia.

Also in September 2021, the same time the AUKUS pact was signed, the US government awarded a contract for construction of a $270 million dollar project for an aviation fuel storage facility that will store 60 million gallons of jet fuel in 11 above ground storage tanks to support American military operations in the Pacific. Construction of the tank farm facility began in January 2022 and is scheduled for completion in two years.

On Guam, with a  population of 153,000 and a military population of 21,700 including families, military fuel is shipped into the large storage facilities at Guam Naval Base.

The repair of 12 fuel tanks with a storage capacity of 38 million gallons has recently been finished at Andersen Air Base on Guam.

Secretary of Defense Austin’s March 7, 2022  press statement revealed that DOD is going to expand its dispersal fueling at sea capability to accommodate the removal of Red Hill from the Pacific fuel network.

Austin said, “After close consultation with senior civilian and military leaders, I have decided to de-fuel and permanently close the Red Hill bulk fuel storage facility in Hawaii. Centrally located bulk fuel storage of this magnitude likely made sense in 1943, when Red Hill was built. And Red Hill has served our armed forces well for many decades. But it makes a lot less sense now.

The distributed and dynamic nature of our force posture in the Indo-Pacific, the sophisticated threats we face, and the technology available to us demand an equally advanced and resilient fueling capability. To a large degree, we already avail ourselves of dispersed fueling at sea and ashore, permanent and rotational. We will now expand and accelerate that strategic distribution.”

However, during the Trump Administration, US Maritime Administrator Rear Admiral Mark Buzby warned Congress repeatedly that the US Merchant Marine did not have enough tankers or qualified merchant mariners to fight even a limited war.

U.S. Merchant Marine experts say the decision to close Red Hill doesn’t take into account the age and status of the U.S. Military Sealift Command tanker fleet,  the ships responsible for at-sea refueling of both ships and aircraft. Shipbuilding experts find it very unlikely that Austin will be able to find the funding or the shipyards need to build a fleet of merchant tankers with “equally advanced and resilient fueling capability.

In response, Congress passed an emergency measure in 2021 called the U.S. Tanker Security Program. In this bill, the United States pays both private companies like Maersk a stipend to reflag their tankers “American.”

“The tanker security measure was an emergency stop-gap measure,” said one MARAD official the online news blog gCaptain interviewed. “It barely meets the most basic needs of our military and in no way can replace the capabilities at Red Hill. The Secretary of Defense is either completely misinformed or delusional if he thinks otherwise.”

Poor planning by the Department of Defense is no reason to continue to jeopardize the drinking water of the citizens of O’ahu.  Red Hill jet fuel storage tanks must be shut down quickly ….and not in nine years!

Please join the Sierra Club, Earthjustice, Oahu Water Protectors and Hawaii Peace and Justice and other organizations for Congressional pressure, testimony at the national, state, county and neighborhood levels, sign-waving, and other actions to ensure the military knows that we demand the Red Hill tanks be defueled and closed in a much shorter timeline than the Manchester Fuel Depot.

Ann Wright served 29 years in the US Army/Army Reserves and retired as a Colonel.  She was also a US diplomat for 16 years and served in US Embassies in Nicaragua, Grenada, Somalia, Uzbekistan, Kyrgyzstan, Sierra Leone, Micronesia, Afghanistan and Mongolia.  She resigned from the US government in 2003 in opposition to the US war on Iraq.  She is the co-author of “Dissent: Voices of Conscience.”