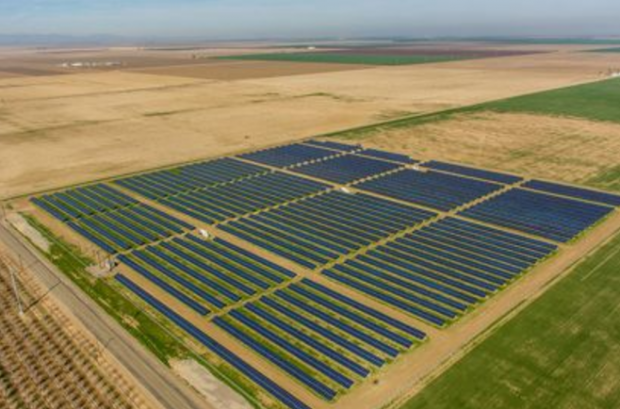 The DOE’s National Renewable Energy Laboratory (NREL) released new research today that shows the average price of utility-scale solar is now under $1 per watt and below 6 cents per kilowatt-hour.

That’s higher than the record-breaking project bids we’ve seen in the U.S. and abroad in recent years. But that’s because DOE calculations for levelized cost of energy (LCOE) do not include subsidies — such as the federal Investment Tax Credit — and are based on the average climate in Kansas City, Missouri. (Note: GTM documented the sub-$1 per watt milestone earlier this year, but the department is using its own metrics.)

“Our mission is to make solar affordable for all Americans, and so our goals are defined for average U.S. climates. We use Kansas City as that example,” said Becca Jones-Albertus, acting deputy director of the SunShot Initiative. “Hitting a 6 cents per kilowatt-hour target for Kansas is a more significant metric than hitting 6 cents in sunnier parts of the country.”

Technology innovation has been a primary driver of the cost declines since 2011. Solar module costs have seen a particularly dramatic cost reduction in recent years. That’s due in part to efficiency improvements as a result of material quality and innovative cell and module designs, as well as the development of diamond wafer sawing, which dramatically reduces material loss in the making of silicon wafers. The NREL report found that module prices also declined substantially over the past year due to an oversupply.

Going forward, the Suniva/SolarWorld trade case could have a significant impact on the economics of solar in the U.S. — and could put the SunShot goals beyond reach again. According to DOE researchers, the tariff requested on imported solar modules would have a 2-2.5 cent impact on the LCOE for solar. If module prices increase from roughly 35 cents today to 78 cents under a new tariff scenario, the cost of a utility-scale solar system would increase from roughly $1 per watt to $1.38 per watt. 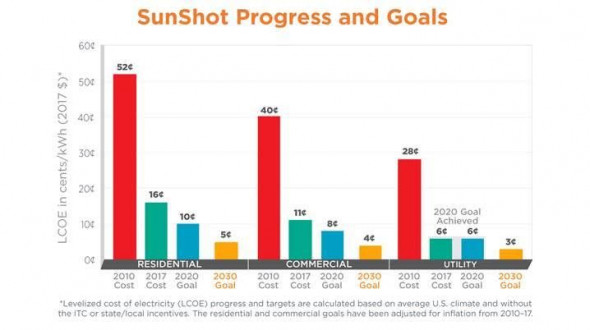 When the SunShot goals were set in 2011, they seemed aspirational. At that time, utility-scale solar prices were around 27 cents per kilowatt-hour. The U.S. solar industry has achieved a decrease in cost by a factor of four in less than seven years — beating the DOE’s 2020 goal. The DOE is now targeting to reach 3 cents per kilowatt-hour for utility-scale solar by 2030.

Residential- and commercial-scale solar costs have not fallen as fast; however, the industry is more than 85 percent of the way toward achieving SunShot’s 2020 goals for those segments. NREL estimates that the total installed system cost has declined to $2.80 per watts (dc) for residential systems, $1.85 per watt (dc) for commercial. Ongoing reductions in soft costs will play a key role in driving these prices lower. 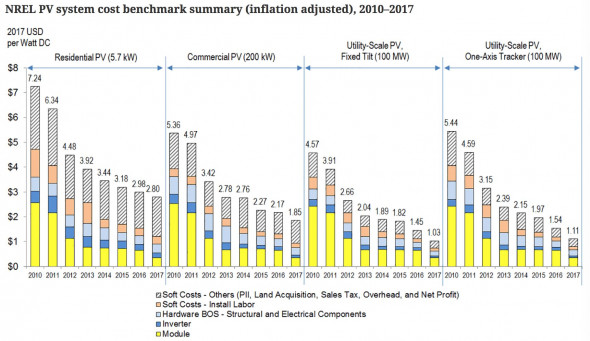 Progress toward meeting the SunShot goals “is a reflection of the speed of change across the entire industry,” said Charlie Gay, director of the SunShot Initiative. “Not just solar, but all sorts of [technologies] are changing at a rapid speed, which makes it daunting to plan the energy system [and] the networks when so many moving parts are making such rapid progress.”

Daniel Simmons, acting assistant secretary of the Office of Energy Efficiency and Renewable Energy, added that the LCOE for solar doesn’t reflect the real-world cost of the technology because solar is not dispatchable. So comparing the LCOE for solar to the cost of a natural-gas plant “is not always apples to apples,” he said.

The fact that solar and wind are not always available on demand “is a challenge we’re trying to solve with these new funding investments,” Simmons said.

Innovations in power electronics technology “are fundamental to solar PV as the critical link between PV arrays and the electric grid,” according to the DOE.

Advances in this area will also help grid operators rapidly detect and respond to problems on the grid, protect against physical and cyber vulnerabilities, and enable consumers to manage their electricity use.

“Ten years ago, we set these levelized cost of electricity metrics just to calibrate what ballpark we’re in,” said Gay. “Now we have a lot of options that are in the ballpark, and [cost] depends on time-of-day value, location value, what are the alternative sources of energy in a particular area, opportunities for managing the grid within that area and combining that type of insight with how the load profiles are changing.”