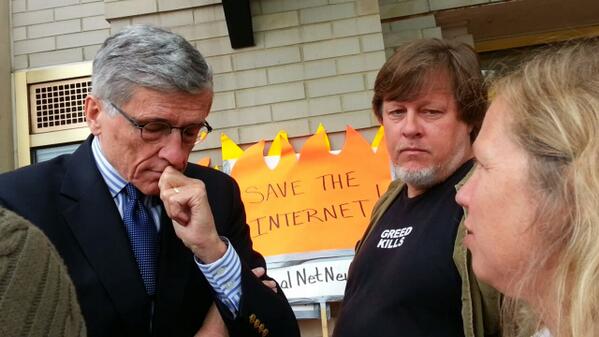 Is FCC Commissioner Saying One Thing And Doing Another?

Above: Chair of the FCC, Tom Wheeler, talks with Margaret Flowers and Kevin Zeese at the encampment outside the FCC’s front door.

And, What You Can Do To Assure Net Neutrality

Once it became known that Tom Wheeler was going to recommend a tiered Internet with different levels of service based on fees, the negative reaction was massive and swift. The reaction included emails, petitions and phone calls roaring into the FCC demanding net neutrality.  Margaret Flowers and I began an encampment at the FCC’s door one week before their Open Meeting where this proposal was going to be discussed. Within the week, the camp grew to 25–30 people. The pressure mounted and Wheeler changed course by including our view in the rule-making process but he continued to cling to his view that the Internet was not a common carrier.

There is no question what the public wants – they want telecoms like Comcast, Verizon and AT&T to be common carriers that bring us to the Internet without any discrimination.

As pressure mounted on Wheeler, the FCC, according to TIME Magazine, was in “chaos.” TIME credited the growing encampment outside of the front door of the FCC and too many phone calls coming in for the agency to handle. Shortly after TIME’s report, Wheeler came to visit us at the encampment.  He made sure to have himself photographed with a sign favoring the Open Internet.

Wheeler is an easy to like guy, who spoke his position well, telling us what we wanted to hear. It was not surprising that he was a super star in two Internet business halls of fame for Cable Television and the wireless industry. When the Guardian asked me what I thought about the meeting with Wheeler I said: “He says he wants an open internet and equal access for all. That’s great, but I judge a man by what he does not by what he says.”

Wheeler’s rhetoric got sharper, by the time he spoke at the FCC Open Meeting. He praised us for our civic action saying: “Thank you to those who felt so strongly about the issue that they camped outside. The Founding Fathers must be looking down and smiling at how the republic they created is practicing the ideals they established.” In addition, his rhetoric was sounding like us, saying: “This agency supports an open Internet. There is one Internet.  Not a fast Internet, not a slow Internet; one Internet.” As the New Republic wrote reporting on the Open Meeting:

“Just listening to Wheeler today, you’d have thought he was the biggest Internet freedom activist in the country. ‘If telecoms try to divide haves and have-nots, we’ll use every power to stop it,’ he said at the meeting. ‘Privileging some network users in a manner that squeezes out smaller voices is unacceptable.’”

Unfortunately, as S. Derek Turner of Free Press writes – Wheeler’s rhetoric is not consistent with what he has proposed. His proposal would allow a tiered Internet based on fees paid.  This is in fact not only inconsistent with what he says, but the opposite. Turner highlights portions of the proposal that demonstrate Wheeler is proposing a tiered Internet based on fees:

“We tentatively conclude that our proposed no-blocking rule would allow broadband providers sufficient flexibility to negotiate terms of service individually with edge providers, consistent with the court’s view that we must permit providers to ‘adapt … to individualized circumstances without having to hold themselves out to serve all comers indiscriminately on the same or standardized terms.’ [paragraph 97 of the proposal]

“Today, we tentatively conclude that the Commission should adopt a revised rule that, consistent with the court’s decision, may permit broadband providers to engage in individualized practices … [paragraph 111]

“…. we tentatively conclude that the Commission should adopt a rule requiring broadband providers to use ‘commercially reasonable’ practices in the provision of broadband Internet access service … [this rule] could permit broadband providers to serve customers and carry traffic on an individually negotiated basis, ‘without having to hold themselves out to serve all comers indiscriminately on the same or standardized terms … ’ [paragraph 116]”

The proposed rule says it would “permit broadband providers to serve customers and carry traffic on an individually negotiated basis.” Turner translates this into layman’s terms: “The FCC proposal authorizes ISPs to create fast lanes and slow lanes.”

Tom Wheeler is very smart, understands the law and has read the court decisions. For some reason he seems unable to comprehend the clear statements of the courts or the Federal Communications Act under which he operates.

Marvin Ammori, one of the top tech lawyers in the United States, explains in simple and clear language why the approach Wheeler is taking will result in a tiered Internet and end net neutrality.  The court in Verizon v FCC ruled that if the Internet is not classified as a common carrier under Title II, then net neutrality rules do not apply. The court was pretty blunt:  “We think it obvious that the Commission would violate the Communications Act were it to regulate [companies that are not subject to Title II] as common carriers.”

Ammori highlighted the key provisions of the law, writing:

“These are the parts of Title II that require common carriers in communications to serve everyone and not discriminate among users. (The full provisions provide even more detail.)

To get a little further into the FCC law, the Act defines “telecommunications services,” and says those services must be offered on a common carrier basis under Title II.  These are services that move data between two points without changing it, i.e. like Comcast, AT&T and Verizon. Under the Act other services that provide and change information, like Facebook or Yahoo, are “information services.” In 2002 when the Internet moved from dial-up to broadband the FCC made a mistake – it classified the Internet as an information service and as a result, it cannot be regulated as a common carrier and required to serve everyone without discrimination.

When this 2002 classification was examined by the US Supreme Court it was upheld, not because the court agreed with the classification but because courts allow administrative agencies to make these types of decisions. The agency is the expert and the court will only overrule in extreme situations.

In his dissenting opinion, Justice Scalia mocked the FCC decision comparing telecoms to a pizza place that delivers pizza. Scalia explained that if a pizzeria advertises it delivers pizza, it cannot claim it does not offer delivery just as a telecom cannot claim that it doesn’t deliver information.  That would be saying something along the line of “No, we do not offer delivery–but if you order a pizza from us, we’ll bake it for you and then bring it to your house” writes Scalia.  In this respect the pizza place, like telecoms offering cable broadband, are common carriers.

The FCC, now that two courts have thrown out net neutrality rules, should take the advice of Justice Scalia and make the law consistent with reality – reclassify the Internet as a common carrier so that net neutrality becomes the law.

When Wheeler met with us outside the FCC he said that treating the Internet as a common carrier would result in lengthy litigation.  While the telecoms might challenge this decision, once the decision is made that the FCC was within its power to reclassify, that is the end of it.  The approach Wheeler is suggesting would result in more litigation because the FCC would have to decide on an individual basis whether a decision is “commercially reasonable” resulting in litigation about lots of cases.

The American people want an Internet that does not discriminate based on fees. The politics of this are clear and Wheeler, an Obama appointee confirmed by the Democratic Senate, is going against super-majorities of the American people. This former Obama fundraising bundler is risking an electoral landslide against his party by going against the people’s wishes.

This all seems so obvious, yet for some reason this two-time hall of fame industry lobbyist now serving as Chair of the FCC, Tom Wheeler, is unable to see it. Does Wheeler really not understand or is he saying one thing and doing another?  The people need to make reality clear to Wheeler by demanding that the Internet be reclassified as a common carrier.

To help Tom Wheeler understand reality and the law please submit a comment to the FCC.  Submit your comment to the FCC here.  The Proceeding Number is 14-28.You can also submit them via email: openinternet@fcc.gov. Take action now, we need to overwhelm the Commission with comments supporting treating the Internet as a common carrier so real net neutrality is the law. For a model comment see What’s Next In Our Campaign To Save The Internet.”

Kevin Zeese is an organizer with Popular Resistance,co-director of Its Our Economy and  Attorney General for the Green Shadow Cabinet.