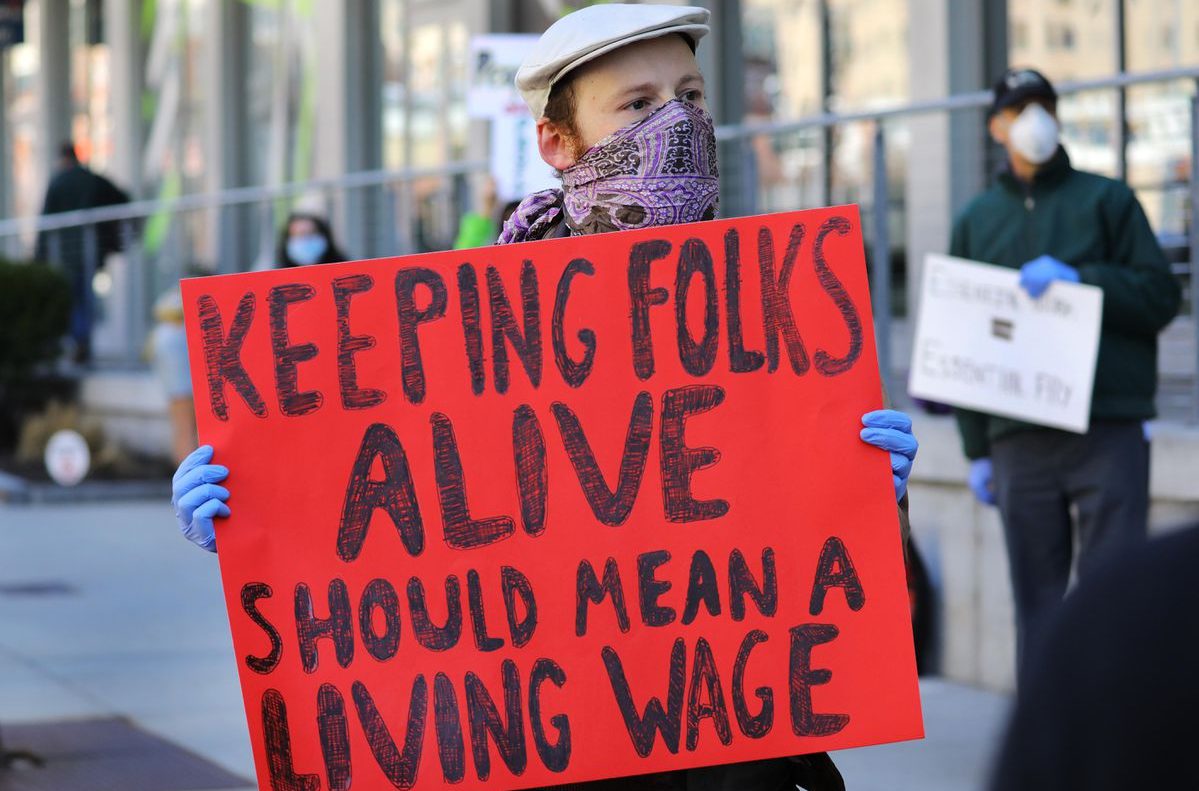 Note: As I wrote in the Newsletter last week, the American Rescue Plan is far from sufficient to resolve the crises we face. In this failed state, though, it is something and for that reason it needs to pass.

The Senate version, which was just passed, is different from the House version. That means the House will need to approve the changes.

Here are some keys changes in the Senate bill:

We need to keep demanding systemic changes to end the crises we face. This includes national improved Medicare for all, a living wage, monthly checks, an eviction moratorium, canceling student debt and a Green New Deal. Economists, such as those at EPI, have been warning that failure to take bold steps will hurt our economy in the long run. In the second article posted below it shows that recovery is still far away   – MF

The overall size and components of the ARP have been carefully studied and considered. Given the balance of risks facing the economy and the danger of delay, passing the plan at its current scale and composition is the most prudent thing policymakers can do to ensure a rapid and fair recovery. Clearly, this is necessary.

As the Senate debates what belongs in the final relief bill this week, policymakers must not shortchange aid to state and local governments, which is essential to a robust recovery. While projected state and local revenue shortfalls are shrinking from the horrifyingly large forecasts of last year, fiscal stresses remain intense, driven by demands on state and local spending that have increased because the COVID-19 economic pain has been concentrated among low-wage workers. This state and local aid is the best and most immediate way to finance public investments in education and safety net programs. Scaling back this aid would make our economy, and the people in it, worse off. Further, we should extend pandemic unemployment provisions to October 3 so relief does not expire in August while Congress is in recess.

Today, the Bureau of Labor Statistics (BLS) reported that 379,000 jobs were added in February. While that’s a solid number, the U.S. economy is still down 9.5 million jobs from where we were a year ago. At this pace, it would take more than two years to even get back to pre-recession employment levels—but getting back to pre-recession levels would not come close to filling in the total jobs gap.

Thousands of jobs would’ve been added each month over the last year without the pandemic recession. If we count how many jobs may have been created if the recession hadn’t hit—consider average job growth (202,000) over the 12 months before the recession—we are now short 11.9 million jobs since February. Make no mistake: The $1.9 trillion relief and recovery bill being considered in Congress this week is exactly what workers and their families need right now.

As we approach International Women’s Day, it’s important to remember that women have borne a heavier burden of job losses in the pandemic recession. Women’s disproportionate job losses are due in part to both occupational segregation (i.e., disproportionately more likely to hold lower-wage service sector jobs) and caretaking responsibilities (i.e., closed schools, daycare options, and caregiving responsibilities for other family members in general). In the United States, there’s a clear gender story here, but in the aggregate, it’s not about white women. Black and Hispanic women experienced the most significant and disproportionate job losses in the pandemic recession.

Black workers experienced an uptick in unemployment in February, back to 9.9%, just shy of the high-water mark in the Great Recession. Because of historic and current systemic racism, Black and Latinx workers have seen more job loss and more illness in this pandemic. Passing large-scale relief measures now is an economic and racial justice imperative.

The unemployment rate improved slightly, hitting 6.2% in February, but it would be a huge oversight to think that those officially unemployed workers are the only ones to experience economic pain in the pandemic recession.

In addition to the 10.0 million officially unemployed workers in February 2021, we must add four more groups of economically hurt workers.

• Second, the 2.7 million undercount of unemployed workers, found even in normal times.

• Fourth, the 6.6 million workers who experienced a drop in hours and pay because of the pandemic. (More detailed methodology on each of these numbers can be found here.)

In total, this means that 25.1 million workers—or 14.7% of the workforce—have been directly harmed by the coronavirus downturn. On top of this, another 1.2 million people applied for unemployment insurance benefits last week. It is clear that policymakers need to step up right now to provide relief, and the $1.9 trillion relief and recovery bill is at the scale of the problem and is essential for a robust and equitable recovery.