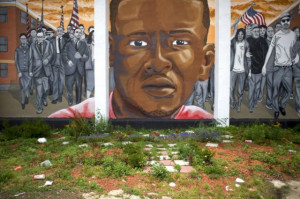 Above Photo: MARK MAKELA VIA GETTY IMAGES. A mural in Baltimore depicts Freddie Gray, who died in custody of Baltimore Police officers following a “rough ride” in a police van.

One vexing challenge underlies and overrides nearly everything in the Justice Department’s 163-page report on the failings of the Baltimore Police Department: race.

Justice officials found that police used excessive force and unlawfully stopped hundreds of thousands of drivers and pedestrians without cause — and that African-Americans bore the brunt of this.

Through both statistics and the personal stories of police abuse, the report provoked soul-searching on Wednesday as Baltimoreans tried to wrap their heads around this troubling portrait of their city.

“If we allow this conversation to not be on the systemic nature of the problem, we’re not going to fix it.”

The report— particularly the passages that detailed the harsh treatment, humiliating public strip searches and other forms of harassment citizens told federal investigators they had faced — drew reactions of anger, sadness and outrage. But there was little surprise, especially among blacks, and even less joy that the report confirmed what they have long been saying about police treatment.

The Justice Department opened a civil rights investigation of the police after the death of Freddie Gray in police custody last year fueled protests and riots.

Bell-McKoy is among civic leaders who have been wrestling with the challenges detailed in the report as part of the Baltimore Aspen Workgroup for Dismantling Structural Racism.

“It is now documented in black-and-white print: These are the facts many of us have experienced,” she said.

The chief executive of a multimillion-dollar organization, she believes she has been stopped by police just because she is black.

“My race is predominantly, first and foremost, what is visible to the public,” Bell-McKoy said. “This is part of the baggage of our country’s history.”

Patrick McCarthy, president and CEO of the Annie E. Casey Foundation, called on Batimoreans to “take responsibility” for the racism “embedded” in the city. The report should be a chance “to redouble our efforts to dismantle the damaging policies and practices that have undermined too many of our children and families,” he said in a statement.

That Baltimore, a majority black city in which much of the political leadership is also black, has an entrenched racial problem is troubling, many said.

Despite the Justice Department findings, Schmoke — now president of the University of Baltimore — said he feels optimistic that the city will unite to fix the problems.

“I met with one of the young elected officials recently and told him … some of the same problems I faced in the ’90s are still here, but you’ve got a climate now of people who want to work as partners with you to solve those problems,” Schmoke said. “I’m hoping people will look to the future and not just dwell on the past.”

“This report uncovers what so many people already knew to be true,” said Mckesson, who was recently arrested in a Baton Rouge protest against police brutality. “Commissioner Davis’ comments so far highlighted the need and understanding for deep, systemic change, and now we have to see what that means in practice.”

Still, Mckesson expressed frustration that Baltimore’s leadership has allowed the city to get to this point, and questions their lack of action prior to release of the Justice Department report.

“I think addressing deficiencies in the Police Department can be politically risky, and I think some people have not been willing to take those risks,” he said. “Some people put their careers above what they know to be right.

“I am thankful the unrest has created an atmosphere that is forcing people to address these issues. We can change the systems and the structures in a way to change the culture.”

Gov. Larry Hogan said Wednesday that he hadn’t read the report. But he said the coming change in city leadership in the November election could bring changes. “We have a new mayor coming in, a whole new administration,” Hogan said. “Hopefully they’ll take some of these issues seriously.”

“The Democratic regime — I was a part of it — has had political relationships that have superseded holding people, their friends, accountable,” he said. “It’s called Smalltimore for a reason.

The Fraternal Order of Police, the union representing city officers, decried what it called the Justice Department’s blaming of the rank-and-file for policing problems.

Rather, union president Gene S. Ryan said in a prepared statement, the report is an indictment of “the failed leadership at all levels of city government.”

Similarly, the president of a group that promotes fairness in the Police Department’s hiring and promotion practices said the report’s citation of excessive arrests that ultimately result in no charges are the result of commanders pressuring officers on the street to keep up arrest numbers.

Lt. Kenneth Butler recalled a commander confronting him about monthly arrest numbers when he was assigned to the Southern District.

“Don’t you think that’s kind of low?” the commander asked, according to Butler. “It still goes on,” he said.

Butler, who now is with the department’s special operations unit, is president of the Vanguard Justice Society, which was created in the 1970s to represent the interests of black officers. According to the Justice Department, about 42 percent of the Baltimore police force is African-American.

Stephen L. Morgan, a Johns Hopkins University sociology professor who has studied the so-called “Ferguson effect” on arrest and crime rates, said many cities are wrestling with issues raised by Justice Department investigations. He said the reforms the department is calling for will take time to enact and filter down to the street level.

Debbie Hines, a former Baltimore prosecutor, said the Justice Department was right to highlight the damage of rampant arrests for loitering, trespassing and the like.

Having left the state’s attorney’s office in the late 1990s, she said she was surprised to read the report and see the sheer number of arrests on what she considers “bogus” charges.

“It’s worse that what I thought,” said Hines, a West Batimore native who now practices law and works as a legal analyst in Washington.

Hines remembers being back in Park Heights 10 years ago when her long-ailing mother died, and being threatened with arrest by two police officers who wanted to take her mother’s body to the medical examiner’s office rather than a funeral home.

That both officers were black suggested to her that there were systemic problems in the department.

“It’s an entrenched culture,” she said.

The Rev. Glenna Huber, co-chair of the grassroots group BUILD, said Baltimore tends not to speak as openly about racism as other cities in which she’s lived.

“We don’t name it explicitly,” said Huber, an Episcopal priest who has lived in the city for eight years.

Now, Huber said, Batimoreans have got to make sure the report leads to change.

“We are angry,” she said. “People have been saying these things for years, even generations. We need accountability.”